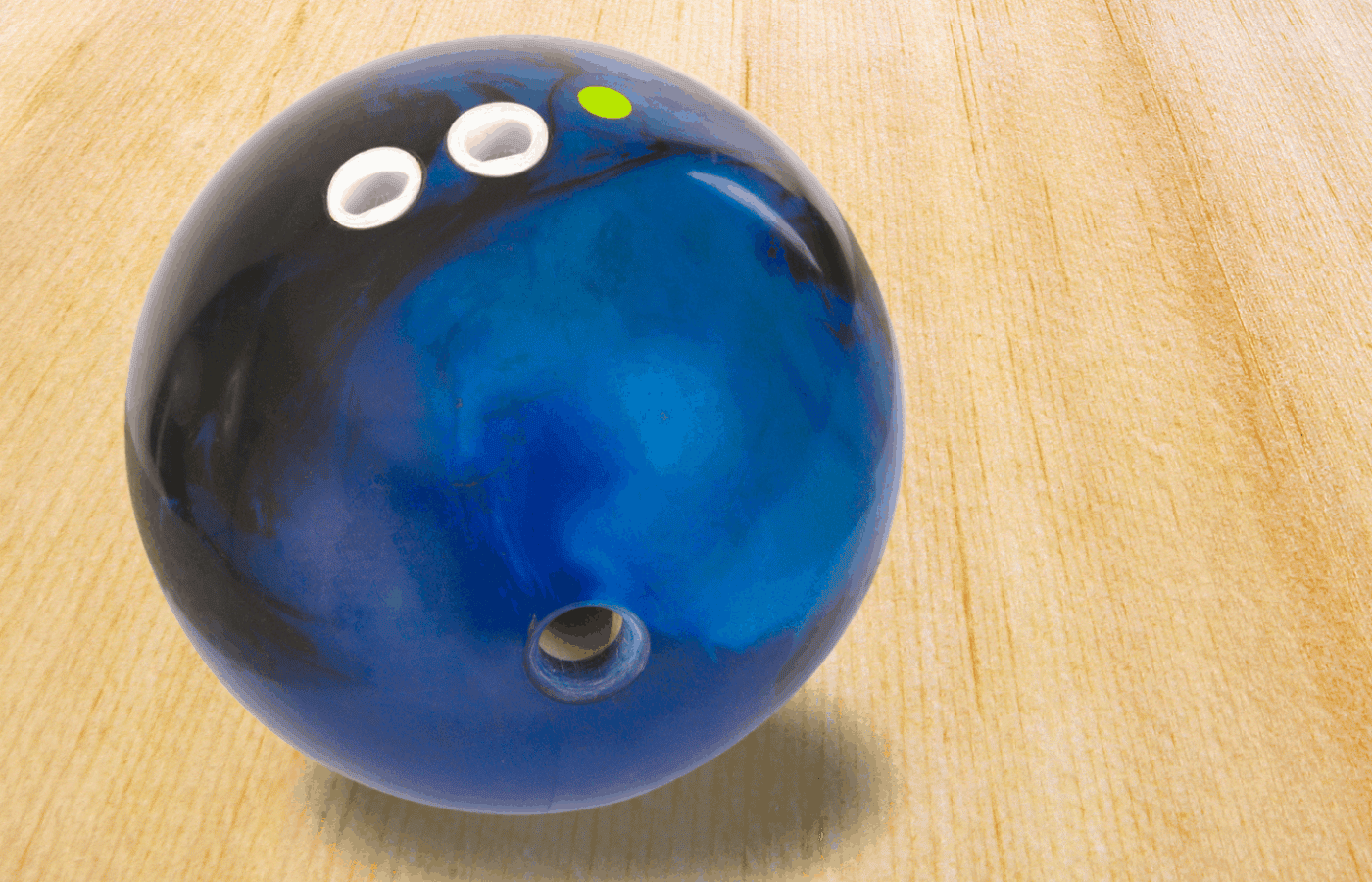 The simple answer is that bowling balls are definitely solid, through and through. The more complicated answer is both illustrative and variable. Bowling balls are composed of an outer shell, called a cover stock—typically made of reactive resin or urethane—filler material, and a weight block.

No bowling ball is created equal and despite how lightweight some of them can be, this is just an example of density engineered for those who prefer a lighter ball. The amount of science involved in the creation process is surprising but makes sense in the context of gravity, motion, energy, and direction.

Do Bowling Balls Have Liquid Centers?

Just because Homer Simpson opened a catalog once and found a bowling ball with a liquid center, (because only Homer Simpson would find such a thing) doesn’t make it real. However, it has contributed to the false assertion that bowling ball cores are anything but weight blocks.

Physics has something to say about the absurdity of a rolling ball with a liquid center. In reality, the inside of a professional bowling ball looks like something straight out of a SpaceX engineering project. There are several varieties of weight block centers that are manufactured in bowling balls:

Pancake weight blocks are beginner-friendly and consist of stacked layers at the center, while asymmetrical and symmetrical are more oddly shaped, generating more gravity outward from the center.

Two and three-piece bells are shaped exactly as their name suggests. Some are more hammer-shaped while others closely resemble a mushroom. Try to imagine a hammer spinning inside of a sphere and the type of force that would create.

Lighter bowling balls are usually filled with different types of foam—not including the weight block core—while still retaining the reactive resin or polyurethane shell. This is as close as a bowling ball will come to being hollow.

How Does the Core Affect the Coverstock?

Because bowling balls aren’t hollow, the weight block and filler material heighten the importance of the coverstock (shell) and friction. There are a few types of coverstock:

A bowling ball with a hollow core couldn’t take advantage of these types of coverstocks, especially when getting into the finer details, such as mica-infused shells.

Regardless of the type of weight core, plastic coverstocks have very slick surfaces and are generally pretty hard. They’re beginner-friendly because most beginners are learning how to drive the ball down the lane, rather than attempting to spin it into a pocket.

Urethane coverstocks are intended for intermediate-type players. Believe it or not, the slick surface of a bowling ball absorbs the oil on the lane. The more oil absorbed, from spin and weight, the more friction that is gathered, generating a.sharper hook. Urethane balls accomplish this better than polyester.

Have Bowling Balls Always Been Solid?

Some form of bowling has been around since ancient times when Tutankhamun walked the earth and geocentrism was cutting edge science. In the more modern era, when lane bowling became predominant, bowling ball manufacturing started to evolve.

Hard rubber bowling balls replace the wooden versions in the early 20th century and though the shell changed, the core-filling process remained the same until computerized methods became commonplace in the 1990s.

Where Did the Idea of Hollow Bowling Balls Come From?

The logical answer is that it is predominantly a misconception. Bowling balls weigh between 6 and 16 pounds, are roughly the same size, and have deep holes for finger placement. So, therefore:

The general thought process is that the lighter balls have to be hollow and the heavier bowling balls are more solid. Also, due to the ten-pound swing in weight difference, the plausible assumption is that less weight equals less material.

Many beginner bowling enthusiasts also associate the finger placement holes with a hollow core. The reality is, the finger holes are really just finger holes. They are, however, precisely placed to accommodate a bowler’s hand as it relates to the symmetry—or asymmetry—of the weight block.

What Constitutes a Weight Block?

Regardless of filler material, the weight block is where it gets downright scientific. Understanding the composition and function of the weight block clears away any doubts as to why all or some bowling balls don’t have a hollow center.

These pins provide the bowler with invaluable information because it lets them know how the bowling ball will perform under spin and speed.

Bowling balls with asymmetrical weight blocks take more advantage of friction and pull harder in the direction of spin. The drawback, due to their lack of symmetry, is they are a little more unstable and unpredictable.

Symmetrical weight blocks produce more expectant results. They take advantage of friction while not pulling too hard too early as it travels down the lane. They don’t generate a harder hook and therefore require more precision when aiming for a pocket.

The science of bowling balls and motion has come a long way since the era of lawn bowling in the middle ages. While bowling balls have always been manufactured as solid spheres, the engineering behind the materials is certainly complex.

Despite a popular understanding amongst beginner bowlers, bowling balls are solid throughout, with three varying layers of composition. Filler material, coverstock, and weight block combine to weigh between 6 and 16 pounds, according to regulation play.

Bowling balls don’t contain liquid centers either. The physics of fluid retard spinning motion and would be counterproductive. Instead, the weight blocks are typically iron ore, graphite, and sometimes a combination that includes zirconium.

The creation process is now computerized with the tiniest details tweaked and updated to accommodate every type of bowler, form, spin, and speed. So, not only have bowling balls never been hollow, their cores are designed with the precision necessary to perfect a bowler’s game.