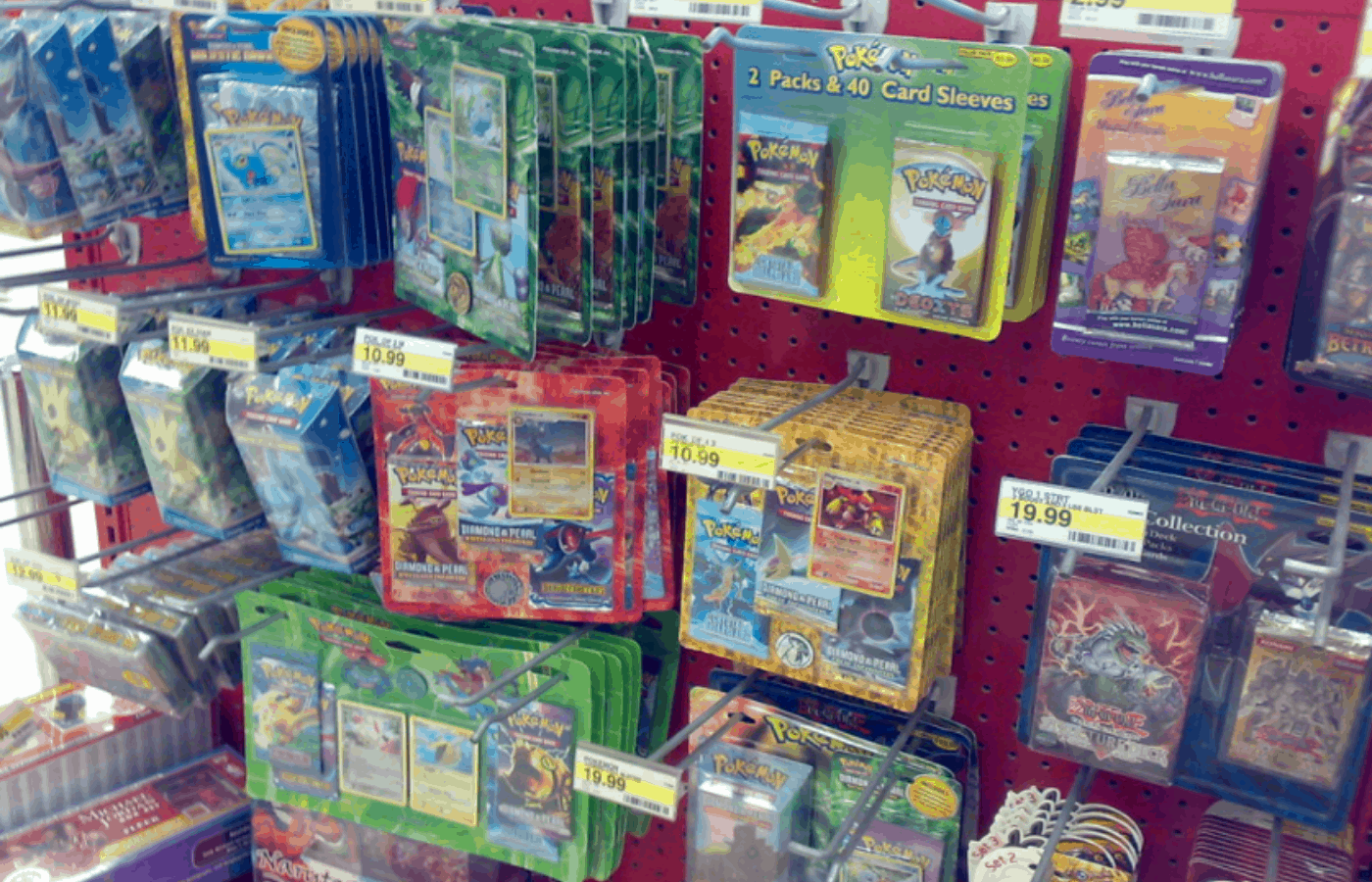 Pokémon cards were popular in the late 90s and early 2000s, and most of the older sets went out of print many years ago. However, it was recently announced by Pokémon that they will be reprinting sets and products to meet the increase in demand.

The company also promises to take the demand into consideration for future product releases, to make sure all Pokémon fans can get a hold of Pokémon cards.

Pokémon cards first made an appearance in 1996, and has recently made an unexpected comeback! Collectors are finding it increasingly harder to find and purchase trading cards, which has led to a multitude of questions – all of which will be answered below.

Some of the older sets stayed in production for around two years or more, and while Pokémon cards have never gone out of print, some sets have only been available to purchase from other players or in stores with sets still in stock. The Pokémon Company has been producing, printing, and selling new card sets.

For old sets to go out of print is very common within this type of business, as players are usually looking for what is new and fresh. This has been especially true considering the loyal Pokémon fanbase, which for many years made up a big percentage of the Pokémon empire’s client base.

Recent studies concluded earlier this year showed that there has been an impressive 34.1 billion cards sold all over the world since the card game was first released.

Yes! Great news for Pokémon fans – The Pokémon Company has recently posted on their website that they will start reprinting sets that have been out of print for years, and that they will do their best to accommodate the rise in demand.

For years, The Pokémon Company has had a good idea of the production numbers required to meet the existing demands, but as the demand increased – they have had to adapt to what is showing a promising future for the Pokémon franchise.

Why Is There a Pokémon Card Shortage?

If you have recently taken interest in Pokémon cards or if you have been collecting for years, then you have likely noticed that they have gotten increasingly difficult to find in stores and with retailers. The explanation is their sudden surge in popularity.

While Pokémon cards were extremely popular when they first came out and for a few years to follow, the general interest in the playing cards appeared to diminish as time went on. Hardcore Pokémon fans continued to buy cards, but their popularity was nowhere near what it once was.

Now, in the last few years, Pokémon appears to be back on everybody’s lips, and suddenly the trading cards seem to be more in-demand than ever before.

Reasons for the Surging Popularity

To avoid confusion, it is important to understand that Pokémon has never disappeared nor stopped being popular, only that for a few years, it remained popular among a smaller group of Pokémon fans. The recent rise in popularity has been significant though, and it appears that both old and new fans are discovering Pokémon and Pokémon playing cards.

Pokémon Go certainly helped Pokémon regain its fame – both with the generation that once watched Pokémon as kids and with newer generations! Sentimentality inspired thousands of people to start playing the virtual game, and it wasn’t long before the game also inspired people to start buying playing cards again.

Another reason is simply the passing of time. Trends tend to come back (even the most unlikely trends), and experts say it’s not surprising to see Pokémon playing cards receive attention again. This, however, put tremendous strain on a business that wasn’t prepared, which essentially resulted in a playing card shortage.

Where to Find Pokémon Cards

When the card game first came out, it was incredibly easy to get a hold of new Pokémon cards! You could purchase them in supermarkets, convenience stores, gas stations, and online, and many magazines used Pokémon cards as a way to get teenagers to purchase the latest issue.

Kids all over the world purchased packs with cards and traded these with their friends, and in the 2000s, as the internet became more widely used, you could get your cards from a variety of sales points regardless of where in the world you lived.

The reprinted cards have not been released yet and there is no release date on the Pokémon website at this time, but they are also likely to be very easily accessed by Pokémon fans once they do drop.

The best way to keep track of any changes is to sign up for the Pokémon newsletter or to keep an eye on the website, as all updates are most likely going to be posted there. Once they come out for sale, it is believed they will be sold mostly online and in gaming stores, to meet the new demand.

The best place to find Pokemon cards is online. Click here to check out the current prices and availability of Pokemon Booster Boxes on Amazon.

Pokémon is a Nintendo franchise, and one of the franchise’s most successful creations is the Pokémon cards. The Pokémon Trading Card Game is often referred to as PTCG or Pokémon TCG, and it was initially released by Japanese Media Company in 1996.

In the US, The Pokémon Company has been behind the game since 2003. There are many different cards and card types you can collect when playing the Pokémon card game, and the idea is for you to take on the role of Pokémon trainer when you play.

When you play, you have your Pokémon battle the other player’s Pokémon, and it is up to each player to make smart choices and decide which Pokémon to send into a challenge. Each one has different strengths and abilities, and your goal is to acquire additional Pokémons by winning a battle.

At the time of writing, a total of 76 Pokémon card sets have been released in Japanese, while North America has released 86 sets in the English language. Collectors have often tried to obtain both English language and Japanese language cards, and they have been hot items on sales sites like eBay for years.

A while lifestyle quickly formed with the Pokémon trading cards, and even though some people (and especially children) settled on trading Pokémons with their friends – there were (and still are) actual tournaments held all over the world.

Who Can Play Pokémon Cards?

For those who have never played with these cards, or who used to have them as kids but haven’t purchased sets since it is easy to think that Pokémon playing cards are for children only.

Interestingly, more adults than children have been playing Pokémon in recent years, and it is a strategic game that suits anyone who likes to learn details and set up their own strategies to reach the desired result. Yes, you play with cute and colorful animals, but the game offers a lot more than that.

If you are unsure whether Pokémon and Pokémon games are right for you, the best thing you can do is to read up on the rules to get started. Once you understand the rules and the many variations of the game, you might understand why both children and adults are drawn to it.

Do You Need to Watch Pokémon to Play?

Don’t expect to understand the game right away, as there are many rules and details to keep track of! However, it is not necessary to be a big fan of the TV series in order to play, and you can play (and even win) without having ever seen or read a single thing about Pokémon.

Watching Pokémon may possibly make it more fun to play, as you will recognize the characters and the situations mentioned on the cards, but all it takes for you to become a successful player is for you to learn the rules and think strategically when entering a Pokémon battle.

If you have been asking yourself what is going on in the Pokémon world and with the Pokémon card game – the good news is that The Pokémon Company just announced that they will start reprinting old card sets to adjust to a booming market!

While the Pokémon card game has remained popular among dedicated fans ever since it first came out in the 90s – the virtual game Pokémon Go gave the franchise a much-needed popularity boost among both new and older generations.

The popularity boost quickly led to a playing card shortage, which The Pokémon Company is reportedly trying to solve. At this point in time, old sets can be found in select stores and on websites like eBay, but it looks like fans can soon expect to gain access to reprinted sets.