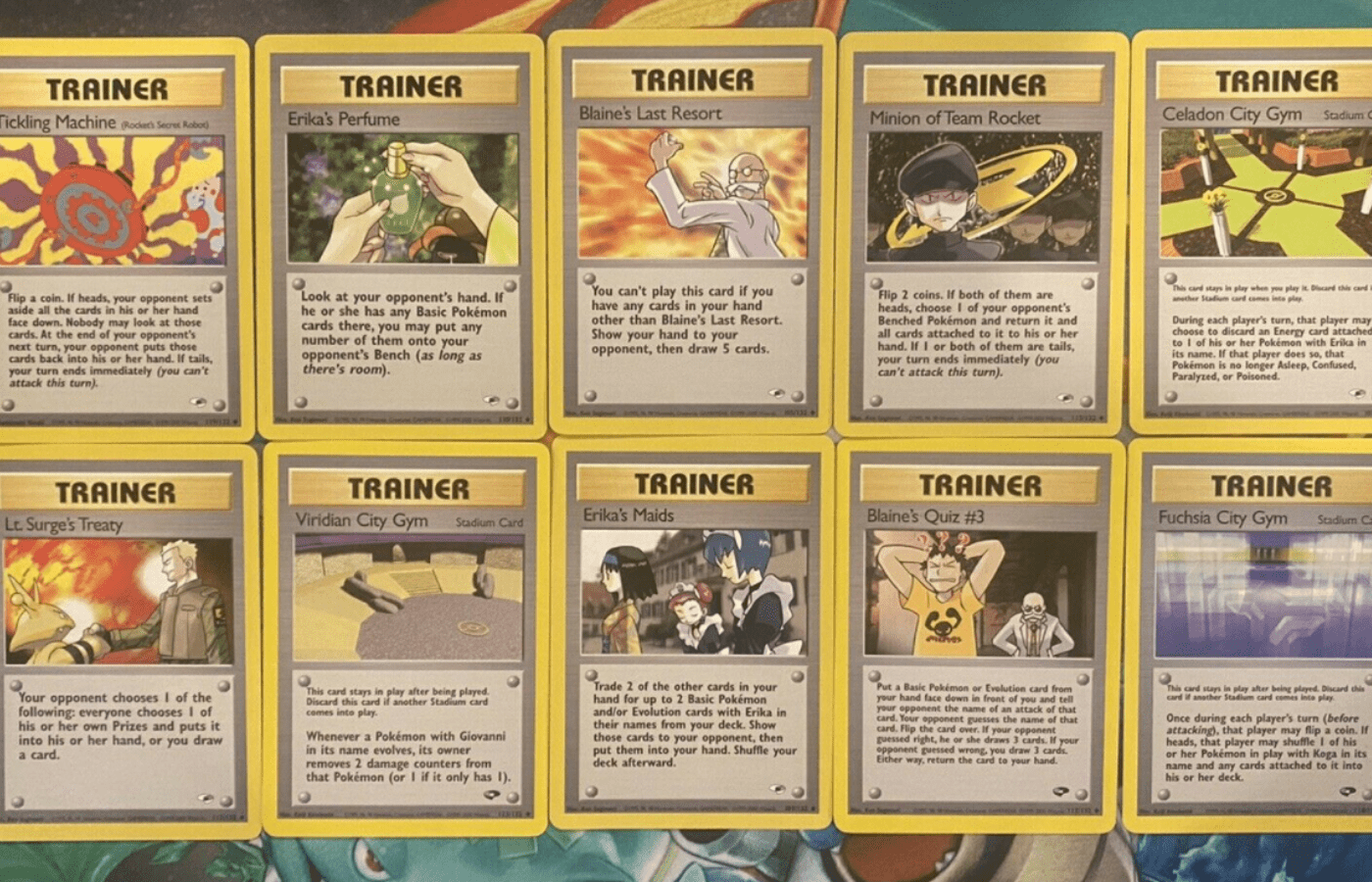 Pokémon Trainer cards, like most collectibles, can be worth a pretty penny! Some even sell for tens of thousands of dollars or more! Not all cards are created equal, however.

A card’s age, rarity, and overall condition can affect the value of your Pokémon Trainer Cards.

The following article will explore which cards are worth money, how to identify your card’s age, rarity, and condition, and where you might be able to sell your Pokémon trainer cards.

What Pokémon Trainer Cards Are Worth Money?

Below is a list of the fifteen most valuable Pokémon Cards and Trainer Cards:

Created by a print error (later editions of this Charizard included the Pokémon’s Shadow), the last recorded sell of this card earned a whopping $369,000

Created on commission by Wizards of the Coast (the makers of Magic: The Gathering), this card last sold for $360,000.

Featuring the Pokémon Company’s President himself, a signed version of this card sold in April 2021 for $247,230

Only three of these cards are known to exist, bringing the most recent sales prices to $110,100.

With only seven copies believed to be in existence, the Super Secret Battle No. 1 Trainer is one of the rarest Pokémon cards made.

Awarded to winners of the regional Battle Road Spring tournaments held in Japan during early 2002, these personalized cards, this card sold at auction in April 2021 for just over $31,000.

A pair of Gold Star Pokémon cards from one of the most valuable Pokémon sets of all time, this card sold for $22,000 in February 2021.

Rumored to have been printed in error, this card’s existence is near impossible to improve. The last rumored sale was $10,500 in April 2009.

How Do I Know if My Trainer Card Is Rare?

The above list shows some of the extreme prices that Pokémon cards can reach, but not all valuable cards are so unique or expensive. Here’s a few things you can check to see if your card is valuable.

Check the bottom of your Pokémon card to find its print dates and edition. First editions – identifiable by the 1 inside a black circle on the bottom left of the artwork – often fetch the highest prices, regardless of rarity!

Pokémon cards come stamped with one of four symbols that indicate the print’s rarity. Circles denote the most common cards, diamonds mark uncommon cards, stars identify rare cards, and extra rare cards have three stars or a star H. The more rare the card, the higher the value!

Pokémon cards are often faked, proving that they do have value, after all! Investigate your card for spelling mistakes, rough edges, uncommon fonts, or plain blue back. (Genuine cards usually have detailed art along the back).

Where Can I Sell My Pokémon Trainer Cards?

Below is a list of online locations where you can sell your Pokémon Trainer Cards.

Regardless of what method you choose to sell your cards, comparing listings of similar cards across multiple sites may help you determine a realistic sell price for your Pokémon trainer cards. Shop around and educate yourself before making any sale final!

Pokémon isn’t just an investment. We all play for different reasons – nostalgia, community, fun, and, of course, to be the very best!

But for those looking to make a little bank from Pokémon trainer cards, many options exist! Although the average player is unlikely to ever see one of the cards worth tens of thousands (or more!) dollars, every card has its value if you’re willing to part with it.

So get out there, trainer, and catch ‘em all!