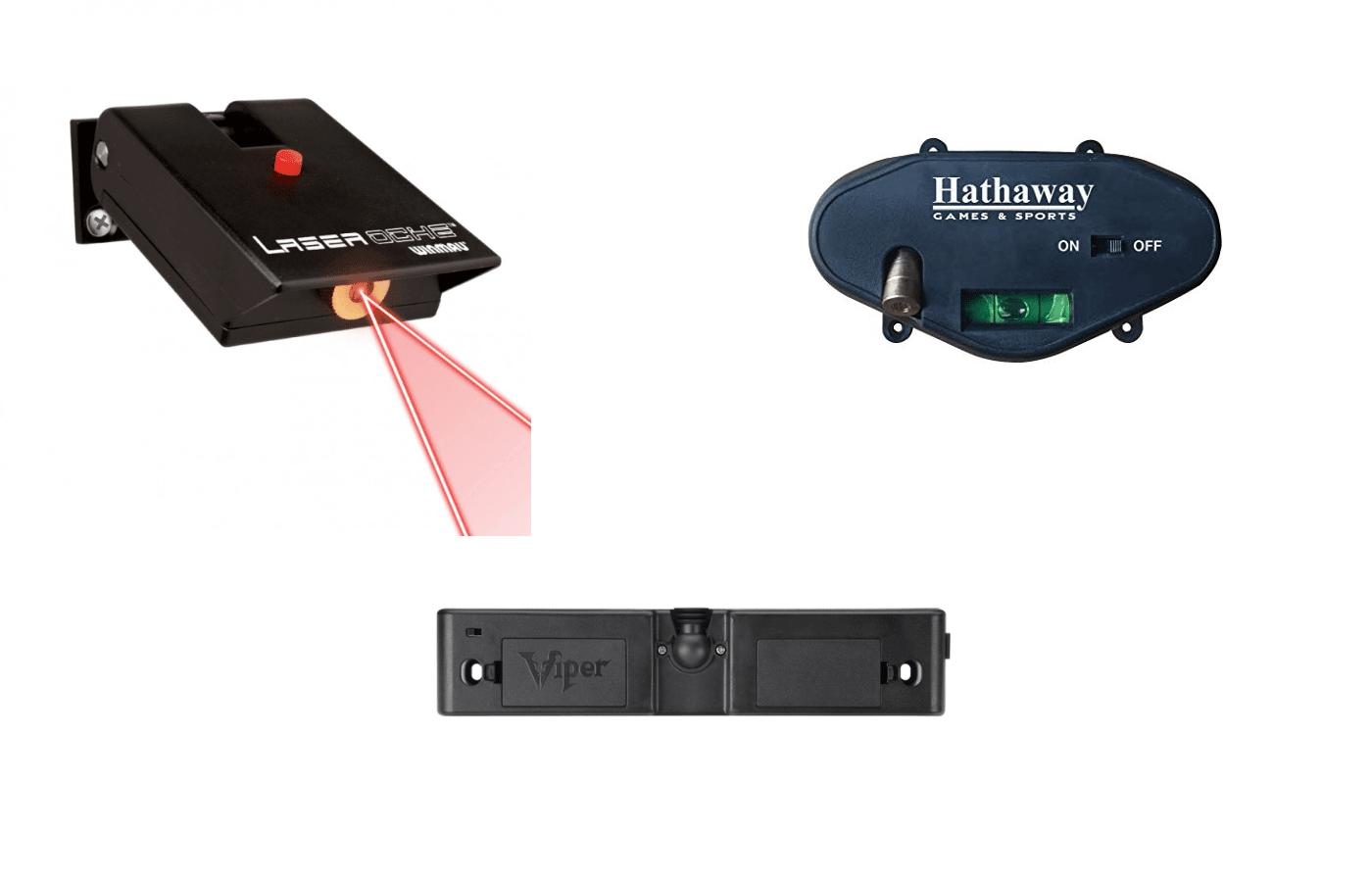 There are a variety of different versions of darts and also a number of different dartboards which are used around the world. 501 is the most commonly played version of darts and is what is played in the PDC. Abiding by the rules of darts, the oche should measure 7 feet 9.25 inches. A marker is then placed to mark where the players must throw from.

The most common types of throw lines or toe markers are adhesive vinyl stickers and dart mats, but there are also laser toe line markers. We’ve sifted through the competition and picked the ones that we feel stand out from the crowd.

In our comprehensive guide to the best laser oche, we’ll show you the best lasers on the market and give you some advice when it comes time to choose. Let’s get started.

IN A HURRY? HERE’S OUR TOP PICKS…

The Viper Laser Toe Line Marker is our top pick when it comes to a laser oche marker. Viper uses a state-of-the-art laser beam to accurately mark your throw line which makes this an awesome alternative to the traditional adhesive floor markers that can get damaged over time.

This laser is compatible with both steel and soft tip darts which makes this an all around great accessory for casual and competitive play. The laser is very bright and is able to be seen clearly even in daylight.

The laser comes with the mounting hardware and can be mounted on a dartboard cabinet or wall. It simply uses two screws on each side of the laser to make sure it stays in place from accidental bumps and the impact from your darts hitting the dartboard.

The power supply is included, but it is also able to run off of 4 AA batteries if you don’t have any nearby power sources to plug the last into.

The Hathaway Precision Laser Toe Line Marker has a strong laser light bulb that’s rated for up to 20,000 hours of play. The laser line also has a nice little built-in bubble level to make sure the line is even during the initial installation.

Installation is easy and comes with all the mounting hardware needed to mount it to a backboard, wall, or dartboard cabinet. Once you have the laser in place, simply measure the distance on the floor and position the laser to specs. Tighten the screws on the mount and you’re ready to go.

The Accudart Lazer Toe Line Marker is another option when it comes to a laser oche. The laser itself is able to be seen on the ground, but may not be bright enough for some players. The laser runs off of 3 AAA batteries that do not come included.

The mounting and installation of this laser is somewhat simple. Some of the main issues within the included mounting is that it isn’t very stable. It is known to be a little loose or wobbly which means it may need to be readjusted quite often. Many users had to modify the mount to make it tighter so it wasn’t too loose.

What to Look for in a Laser Oche

To find the best laser oche for your needs, consider the following major aspects before finalizing a purchase.

Quality and Brightness of Laser

The first aspect to look out for is the quality and brightness of the laser. A good laser can be seen even in the daylight. Some lower quality lasers are more dim and aren’t as vivid or clear as others.

A good quality laser also has a good bulb life. As an example, the Hathaway Precision Laser Toe Line Marker has a bulb that is rated for up to 20,000 hours of play.

This is probably the most important aspect to take into consideration when choosing a laser. If you purchase a laser with a poor quality mount, then you may find yourself needing to adjust the laser between games or even during a game which can really cause a negative game play experience.

Depending on the brand, the laser can be operated with batteries, a power supply, or sometimes both. If you are wanting to have a laser with an option for a power supply then the Viper Laser Toe Line Marker is a good culprit since it has the option for both.

If you are purchasing a laser oche that only has an option for a power supply, then you will need to make sure that you have a power source nearby.

GLD manufactures many different dart brands including Viper. They started out in a south Milwaukee Tavern by the name of Great Lakes Dart Manufacturing. For over nearly 35 years they have paved their way into becoming a premier name in darts, billiards, and gaming tables.

Hathaway Games and Sports has been an up and coming brand over the past 10 years of game room products. They are dedicated in creating an innovative and exceptional products for the consumers in the industry.

Hathaway has a unique approach by combining old-world craftsmanship with new-world machines to craft and create top quality products.

Is a Laser Toe Line Floor Marker Better Than a Standard Dart’s Marker?

The answer to this question is no. At least not yet. Most lasers are difficult to set up correctly and need constant adjustment which would never be viable in a tournament setting.

Over time, as companies continue to innovate and improve the designs on their laser toe line markers, these may begin to replace standard adhesive toe markers at tournaments.

The Viper Laser Throw/Toe Line Marker excels at providing a bright and vivid laser. It also has options for both batteries and an included power supply. The mounting is also superior and hold together well.

The runner up is the Hathaway Precision Laser Throw/Toe Line Marker. It has a bright and vivid laser with a bulb life of 20,000 hours.

Whichever laser oche you choose for your dartboard, we hope this guide has been helpful in your purchasing decision. Thanks for reading!