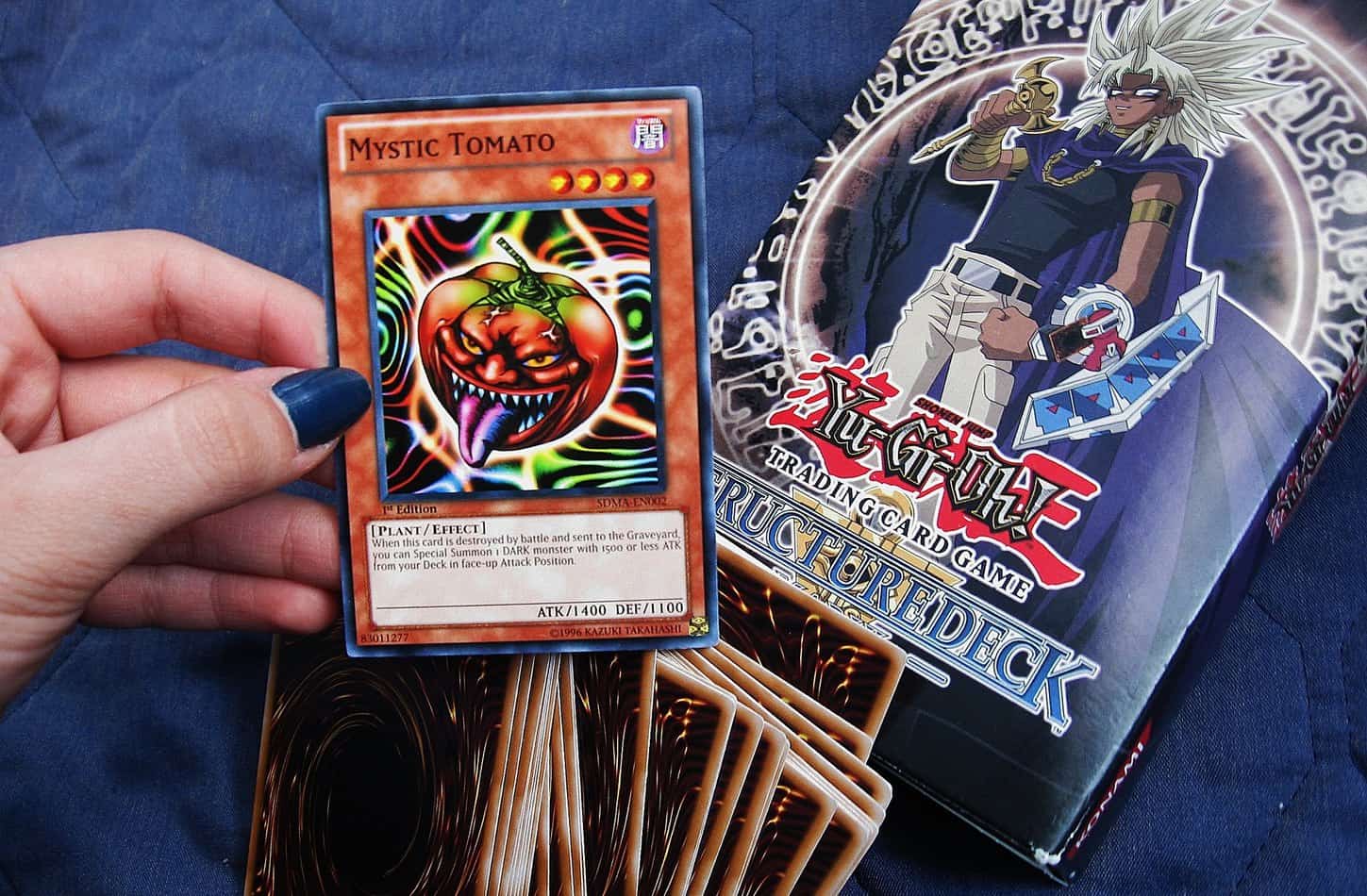 Structure decks are simply the most cost-effective way to start building new decks if you’re ready to upgrade of beef up your starter deck. These decks allow you to obtain reprints and other strong cards that you wouldn’t otherwise be able to acquire without spending a lot of money on boosters or booster boxes. Buying three of the same structure deck is usually recommended since they don’t come with enough cards to build a deck right out of the box.

In our comprehensive guide to the best Yu-Gi-Oh structure decks, we’ll show you the best decks on the market and give you some advice when it comes time to choose. Let’s get started.

IN A HURRY? HERE’S OUR TOP PICKS…

The first structure deck to start off our list is the Wave of Light Structure Deck. This is an awesome deck due to the sheer fact that you can purchase three of these and have a pretty decent counter-fairy deck type set up.

Counter-fairy’s benefit from activating counter trap cards. Eva is one of the newer cards that were added to the counter-fairy archetype and is very powerful.

The Cyberse Link Structure Deck is an all around great deck to purchase for staple cards. There are tons of valuable reprints and other useful cards in this deck that it can be noteworthy to pick up three of these if you need a lot of the cards from this deck.

On top of all the useful generic cards, Tri-Gate Wizard comes with this set and is easily one of the best link monsters in the game.

8- Rise of the True Dragons

Rise of the True Dragons is another awesome deck that you can buy three of and you will instantly have a decent Felgrand deck. The Felgrand playstyle relies on Summoning Level 7 or 8 Dragon-Type monsters from the graveyard.

There are a few useful staple cards in this structure deck, but your main focus on buying this deck is to build a Felgrand type deck.

The Hero Strike Structure Deck introduced Dark Law and Shadow Mist. These two cards are game changers along with Mask Change II. This structure deck makes it extremely easy to special summon Masked Hero Monsters in any deck you want.

You will get a ton of HERO monsters and some useful support spell and trap cards with this deck, but nothing else too significant.

Lair of Darkness is a field spell card that turns all monsters into Dark and allows you to tribute your opponents monsters and special summon torment tokens on your side.

This is an extremely powerful card, and with three of these decks, you will be able to reproduce a pretty decent deck.

Realm of Light is the next structure deck on our list. This is an awesome structure deck since it makes the Lightsworn archetype a lot easier to obtain. Many of the original prints of the core cards of this deck type were very expensive.

This meant that only players that spent a lot of money on singles were able to play this type of deck. Most of this structure deck has reprints of those rare cards and expensive cards. If you are planning or wanting to build a Lightsworn deck, buying three of these will go a long way.

The Master of Pendulum Structure Deck is one of the best bangs for your buck. The amount of useful cards in this deck is astonishing. You get tons of different Pendulum cards, Odd-Eyes Absolute Dragon, Odd-Eyes Meteorburst Dragon, and a ton of other useful spell and trap cards.

This is a must have structure deck since it will enhance and supplement any Pendulum type deck out there with the sheer amount of strong and useful cards that come in this set.

Grabbing three copies of this structure deck makes this one of the best value to money spent decks out there.

The Dino Deck Profile focuses on banishing and sending cards to the graveyard to facilitate its plays. This type of game play gives this deck a lot of staying power on the field. This is an awesome deck to create if you are an advancing beginner, or trying to move away from a starter deck.

Purchasing three of these decks is a no-brainer as it provides many strong Dino cards as well as other support cards. Making a hybrid Dino deck is also an option for many players so they don’t fall victim to some of the counters that are out there for pure Dino decks.

The number two spot on our list is the Emperor of Darkness Structure deck. This deck has caused a lot of rage in the TCg community when it was released. It contains a ton of very powerful and useful cards.

When this deck was first released, you could buy three of them and instantly have a deck that can go toe to toe with the strongest meta decks in the entire game.

As you may have guessed, many of these powerful cards have ended up being banned for competitive play which tapered down how powerful this deck was. Even with the bans, its still worth it to pick up three copies of this deck.

Noteworthy Cards: Erebus the Underworld Monarch, Ehther the Heavenly Monarch, Pantheism of the Monarchs, Domain of the True Monarchs

Now for the number one top pick on our list. The Seto Kaiba 2016 structure deck. This structure deck is a must buy three of. The reason you would buy this deck is to play an ABC deck.

There are tons of different varieties when it comes to ABC decks, but the overall effectiveness of these decks are astounding. Many of these decks can be used in competitive play which is what makes this structure deck the top pick on our list.

The other cards that come with this deck are not very significant, but if you are looking for core cards for an ABC archetype, then this is your best bet. ABC’s have been strong for awhile and have kind of gone under the radar from Konami which means they are going to be here for the long haul.

What to Look for in a Yu-Gi-Oh Structure Deck

To find the best Yu-Gi-Oh structure deck for your needs, consider the following major aspects before finalizing a purchase.

Each structure deck has a theme or archetype. Realm of Light favors a Lightsworn archetype while Dinosmasher’s Fury focuses on the Dino archetype.

Before buying a structure deck, make sure to do some research to see if the play style of that archetype is something you will like or have fun playing.

Some decks have cards that are all very useful for any deck type. A good example of this is the Master of Pendulum structure deck. It primarily focuses on Pendulum type decks, but offers a variety of cards that are useful in most decks.

If you plan on building multiple styles of decks then it is a good idea to invest in structure decks that offer a wide variety of useful cards.

Some structure decks are bought solely for core cards to play competitive decks. One example of this is the Seto Kaiba Structure deck. It doesn’t offer many other useful cards other than the core cards to be used in an ABC deck.

Konami is a leader in the development, publishing, and manufcaturing of trading card games and electronics. They completely took over the Yu-Gi-Oh! card game scene on December 11, 2008 and has been innovating the game ever since.

Konami has been innovating and bringing new, fresh entertainment sources to their audience since the early 1960’s. They recently celebrated their 50th anniversary on March 21, 2019

What Is a Structure Deck?

A structure deck is a deck full of powerful cards. Many of the cards come in singles which means you need to buy at least three if you plan on creating a deck out of them.

Many of the cards found in these decks are reprints of older cards that were very hard to obtain. Structure decks help make rare cards and certain deck archetypes more accessible for new players and veterans alike.

Which Structure Deck Is Best?

The best structure deck to purchase is the Seto Kaiba Structure Deck due to the sheer fact that you get the A, B, and C monsters.

These monsters are very powerful and are the core monsters used in the ABC deck types which can be very competitive decks.

What Is the Difference Between a Starter and Structure Deck?

A starter deck is a deck that is designed to be playable right out of the box for new players to learn how to play the game. A structure deck, on the other hand, consists of cards used to structure your own deck.

A structure deck usually isn’t playable right out of the box, and are mostly used to create and play decks that are a lot stronger than traditional starter decks.

The Seto Kaiba 2016 Structure deck is our top pick for the best structure deck. Although it doesn’t offer much in terms of useful cards, it does come with the core cards that every competitive ABC deck in order to be effective.

The runner up is the Emperor of Darkness Structure Deck. With three copies of this deck you can create a very powerful Monarch archetype deck that will blow away any starter or beginner deck out there.

Whichever Yu-Gi-Oh structure deck you choose, we hope this guide has been helpful in your purchasing decision. Thanks for reading!