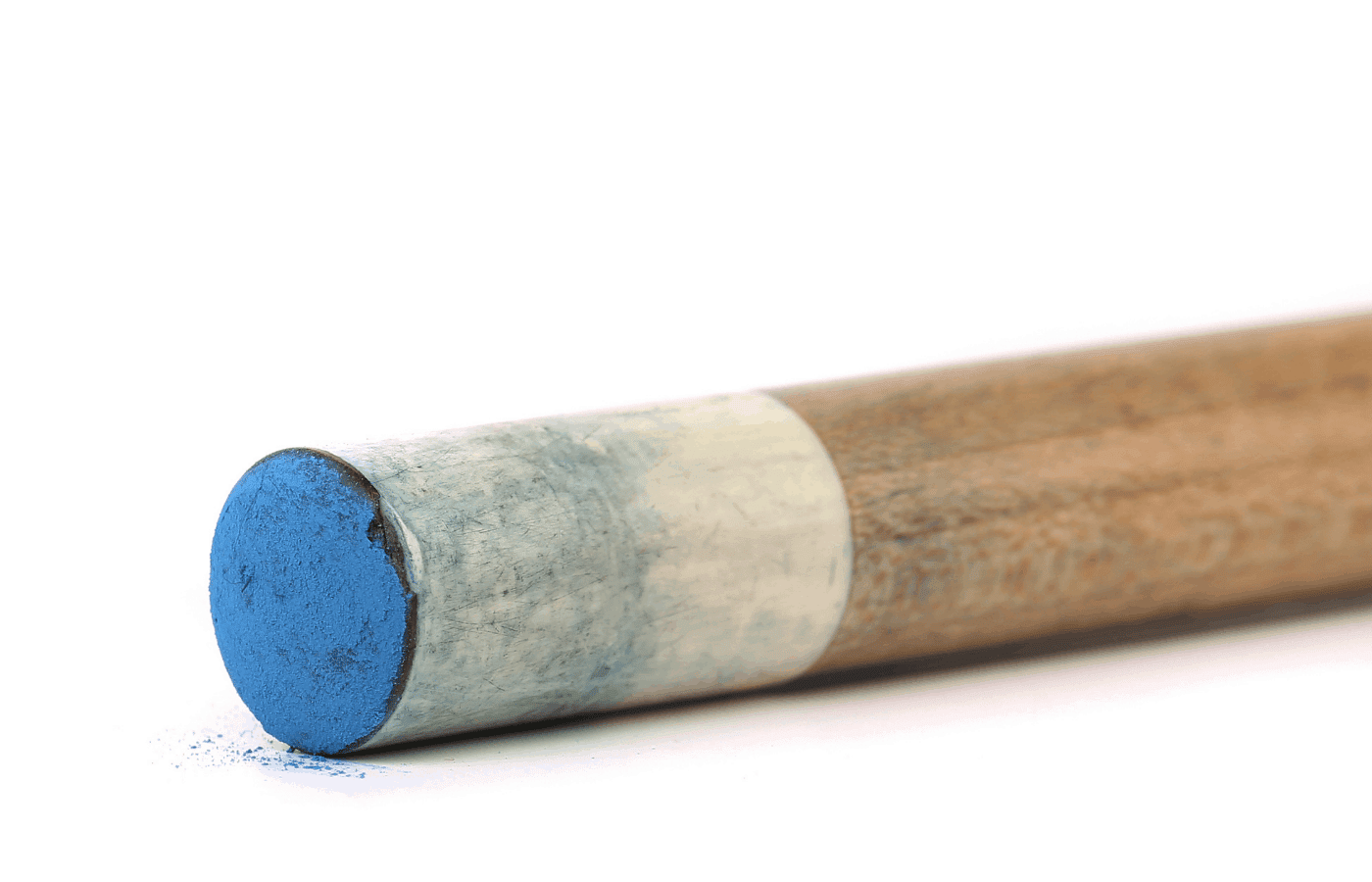 In the game of pool, it is standard for players to chalk the cue tip of their pool stick before every shot. This increases the friction when striking the cue ball. The better the friction is, the less of a chance there is of a miscue when shots are off-center.

If you don’t have cue tip chalk on hand, you are probably wondering if you can use something else for the short time until you can get some. When it comes to alternatives, regular chalk should not be used on a pool stick. Cue tip chalk isn’t really actual chalk at all.

Chalk is naturally occurring and made from calcium carbonate. True chalk won’t work on cue tips because it is too dusty and is known to stain the cloth on a pool table. Cue tip chalk is made out of a combination of crushed aluminum oxide, silica, and dye.

What Can You Use Instead of Pool Chalk?

The first alternative you have is scuffing up the tip of the pool stick. The tip is usually a rounded, plain surface that doesn’t create the required friction when hitting the cue ball. You can make the cue tip a little rougher by scuffing it up with a pocketknife or even your keys.

In previous times, when someone would run out of pool chalk, they would use plaster from the ceiling or wall. It is not recommended to stab your pool stick into the ceiling, as this can be damaging to both the ceiling and the stick. You just need to rub the pool stick gently across the drywall of the wall or ceiling.

Another really great option to use when you are missing pool chalk is talcum powder. It is important to make sure that you do not use baby powder, as this usually contains moisture. Regular talcum powder will work the best. You just need to lightly put the pool tip into some of the talcum powder.

Is All Pool Chalk the Same?

There are so many different brands of pool chalk out there, so how are you supposed to make sure you are getting the best? Not every pool chalk is created equal, so it can be hard to determine which one is best for you. The best way to find the best pool chalk is to try out a few different ones.

When it comes to pool chalk, you really will get what you pay for. Most professional pool players will buy expensive pool chalk because it has a better adhesion and adds more friction. There are also some brands that are known to greatly reduce the chance of miscues.

What Kind of Chalk Do Pro Pool Players Use?

One of the popular brands used by professional pool players is Kamui. This brand is made in Japan with incredibly fine particles and the top technology on the market. The chalk has a texture that is similar to that of clay, making it extra adhesive to the cue tip.

Blue Diamond is another popular brand among professional pool players. This brand is used often because the calk doesn’t melt or get sticky if it is held for too long. The adhesion also lasts for a minimum of five shots, so it isn’t necessary to chalk every turn. It has also been proven to improve cue ball movement providing a balanced spin.

Another brand professional pool players use is Predator. This brand is an affordable option that has the right texture for maximum adhesion. You can go 4 to 6 shots without needing to re-chalk. You will notice that this chalk reduces the amount of miscues. It also provides the ability to hit the cue ball more precisely.

To check the current pricing of Predator pool chalk click here to view it on Amazon.

How Do You Chalk a Pool Stick?

More often than not, people don’t realize there is a proper way to chalk a pool stick. It can be tempting to just rub the chalk on the cue tip without paying any attention. Using the proper chalking technique will not only lengthen the like of the chalk, it also keeps the cue tip healthy.

First, you need to remember to chalk your cue tip before every single shot you take. With some brands of chalk, they are designed to be used only once or twice per game. Read the directions on the brand of chalk you are using to be sure that you are doing it properly.

To get the best coverage of the cue tip, tilt the cue at an angle to the chalk. You will want to use a brushing motion when you move the chalk against the tip of the pool stick. While you are doing that, slowly rotate the pool stick, being sure to keep the chalk steady.

Do not drill a hole in the chalk. The chalk will only get on the very center of the tip, leaving the sides uncovered. Make sure you are getting the chalk to cover the entire surface of the cue tip. You should not have a hole down the center of the cube, the whole cube should be near the same surface level.

It is also important to remember that you should never chalk your pool stick over the pool table. The chalk can get dusty during the application process, and chips can break off and dirty the cloth. It is also not recommended to try removing excess chalk dust from your cue tip.

Do not tap your pool stick on the side of the pool table or even on a wall. You should also not blow the chalk from the tip, as your breath creates moisture. This can cause the chalk to get cakey and not work properly.

Finally, you should always set the chalk back down on the pool table with the color side facing up. This will keep the table clean, as well as your clothes from brushing up against the chalk when it is on its side. It will also keep your hands clean by touching the sides and not the chalk.

Playing pool is a fun sport, but it needs to be done properly to improve your game to the best of your ability. To be the best, you need to follow the rules of pool and chalk your pool cue tip. Sometimes, there may not be pool chalk available, and you are wondering what you can use instead.

It can be tempting to use regular chalk as an alternative to pool chalk, but this is not the best option. Regular chalk is much dustier than pool chalk, so it won’t have the proper adhesion. Pool chalk also needs to be applied properly to get the best results.