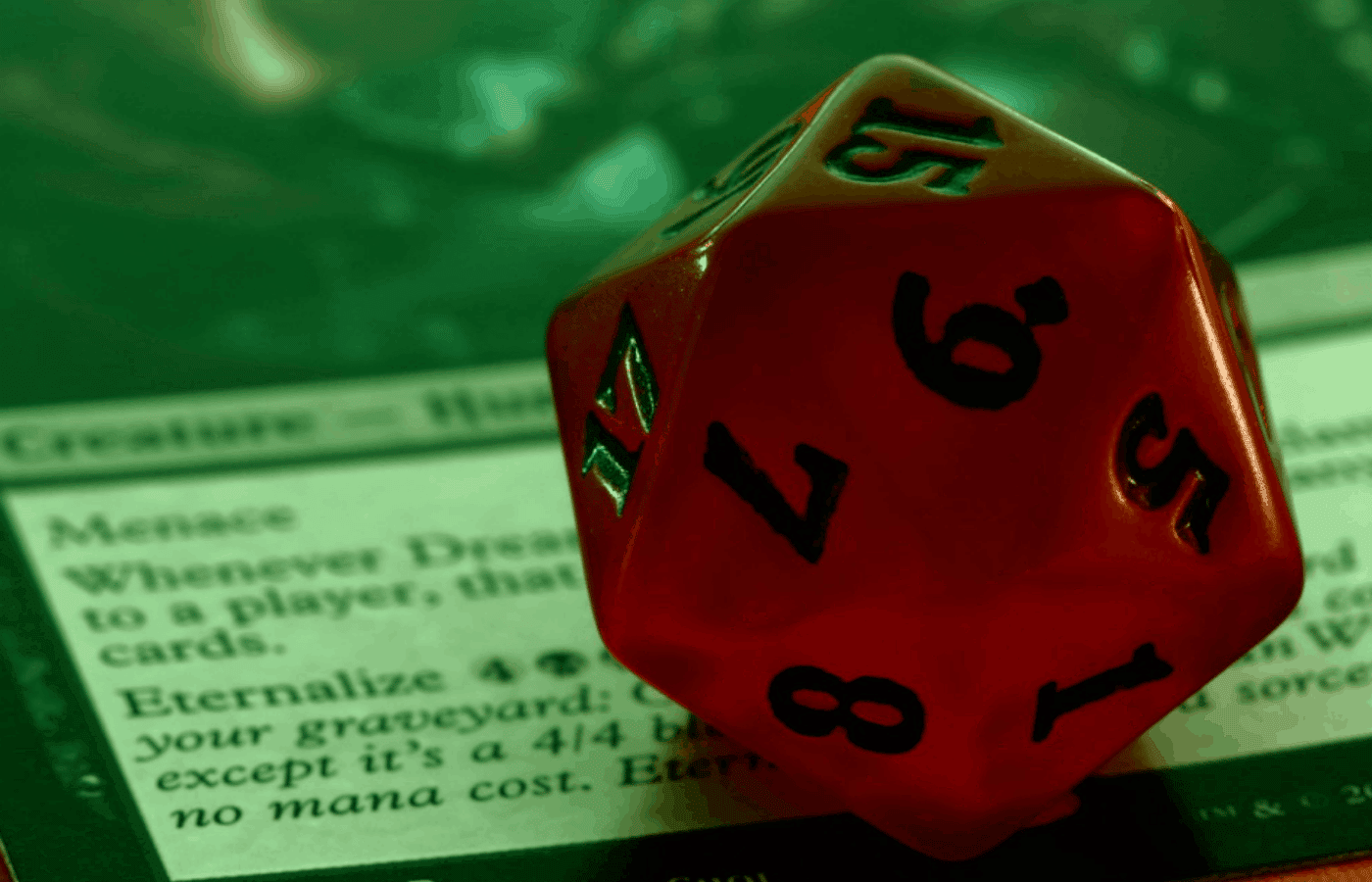 A lot of people wonder whether you need dice to play Magic: The Gathering. We are going to answer this question for you, as well as give you a little bit of an idea as to the situations where you may need to use dice.

So, does Magic: The Gathering need dice? No. Not necessarily. Although, there are a few situations where you may find that a good set of dice can come in handy. They are great for tracking life, enhancements, and even your tokens.

Let’s expand on this a little bit. Hopefully, you will learn whether it is going to be worth you buying a good set of dice or not.

Do You Need Dice for Magic: The Gathering?

Sure. The vast majority of people that play Magic: The Gathering will have a good selection of dice at thier disposal when they get into the game, there is nothing in the rules that state that you need to have dice on you. The dice will just make counting certain things a little bit easier. However, as we will talk about shortly, there are still going to be a few ways around this.

You have to remember that Magic: The Gathering is a trading card game. It is all about the cards. You are not supposed to require anything but the cards. This is what makes the game so brilliant. You can pretty much pick it up and play the game wherever you want.

Remember; since you are not actually going to be rolling any dice in the game, you do not need to buy anything high quality. As long as the numbers on the dice can be read, you are fine.

When Would You Need Dice for Magic: The Gathering?

As we said, you don’t. However, there are a variety of situations where we feel that dice may come in handy.

As you may well know, each player in Magic the Gathering starts with 20 life. The aim of the game is to knock down a player to 0 life. If you do this, then you will win the round.

A lot of people will use 20-sided dice as a way to keep tabs on their life total. This is going to be fine in the vast majority of cases. However, if you are playing a white deck, then you may want to bring along two dice.

As you play the game, you will likely be making various enhancements to your cards. Some of these are temporary, while others are more permanent. Some people will use 6-sided dice to track these changes. They may actually carry both black and red dice with them. This way they can check any situations where their cards have been impacted by the opposing player e.g. a loss of health or life.

If you have a deck that can generate tokens e.g. zombie decks, then you may also find a use for dice. Sure, it is always good to have the actual tokens, but the dice can also make a fairly decent representation for these tokens. A few six-sided dice probably wouldn’t go amiss here.

As Magic: The Gathering changes as a game, people may even start to find more uses for dice beyond this. In fact, you may even have your own ideas about how you can use dice.

Click here to check the current price and Availability of the official Magic the Gathering dice set (spindown). It comes with a set of 5 and is a stylish way to keep track of values during play.

How Many Dice Do You Need to Play Magic: The Gathering?

You don’t actually need to bring any dice along with you. Magic: The Gathering is purely a card game. This means that you do not need to bring along anything that isn’t a card.

That being said, we do recommend that you bring along a 20-sided dice to act as your life counter. In fact, bring a couple of 20-sided dice. This way you will be covered if you have spells (if you are playing White) that can give you more than 20 life.

We also suggest that you bring along some six-sided dice to act as counters. How many you bring along will be dependent on the deck that you are running. If you are, mainly, running a green deck, then it is likely that you will need to bring along a lot more counters than somebody that is running a black deck.

Although, you will likely still need a few just in case your opponent casts a few spells that can impact your health or damage.

Are There Alternatives to Using Dice While Playing Magic: The Gathering?

To be honest, a lot of people have started to ditch the idea of 20-sided dice. Instead, they keep a note of their health in a little notebook or even just a small piece of paper. This is because there are just so many cards in the modern game that can seriously impact the amount on the health of a player that you would need countless 20-sided dice for some decks.

In fact, it is not uncommon nowadays for people to roll combos that can give them hundreds of life. The deck would be pretty ineffective if it is all about the life gain, but the aim is to out life your opponent so you can slowly beat them down while they do barely any damage to you.

In terms of counters, you can just purchase small plastic discs that you can use. These should be available from pretty much any halfway decent board game store.

If you have a lot of tokens that you need to generate in the game, then instead of using a dice, then you could instead buy the actual tokens. They shouldn’t be that expensive as most tokens have had countless reprints over the years. Of course, you could also make your own.

There is nothing in the rules that says that you can’t make your own tokens, so plenty of people do just that. It is all about adding your own little bit of flair into the game.

If you feel like getting a bit more technical than a few sheets of paper, then you will be pleased to know that there are apps for mobile devices that are available on both the Android and the iOS app store. You can download these onto your cellphone or tablet, and you will be able to count all manner of different things in the game.

On top of this, Wizards of the Coast also offer a few digital counters that you can buy. However, those digital counters will be purely for measuring life in the game. You can’t keep tabs on various enhancements to your character.

While you do not need dice to play Magic: The Gathering, a lot of people, find that bringing along their own dice can make playing the game a little bit easier for them.

That being said, due to some of the extreme combos that you are able to unleash in Magic: The Gathering nowadays, it is not uncommon for people to use paper or other methods of keeping track of various things in the game. Sure, you can always bring along some dice, but that paper is going to be doing most of the work for you.