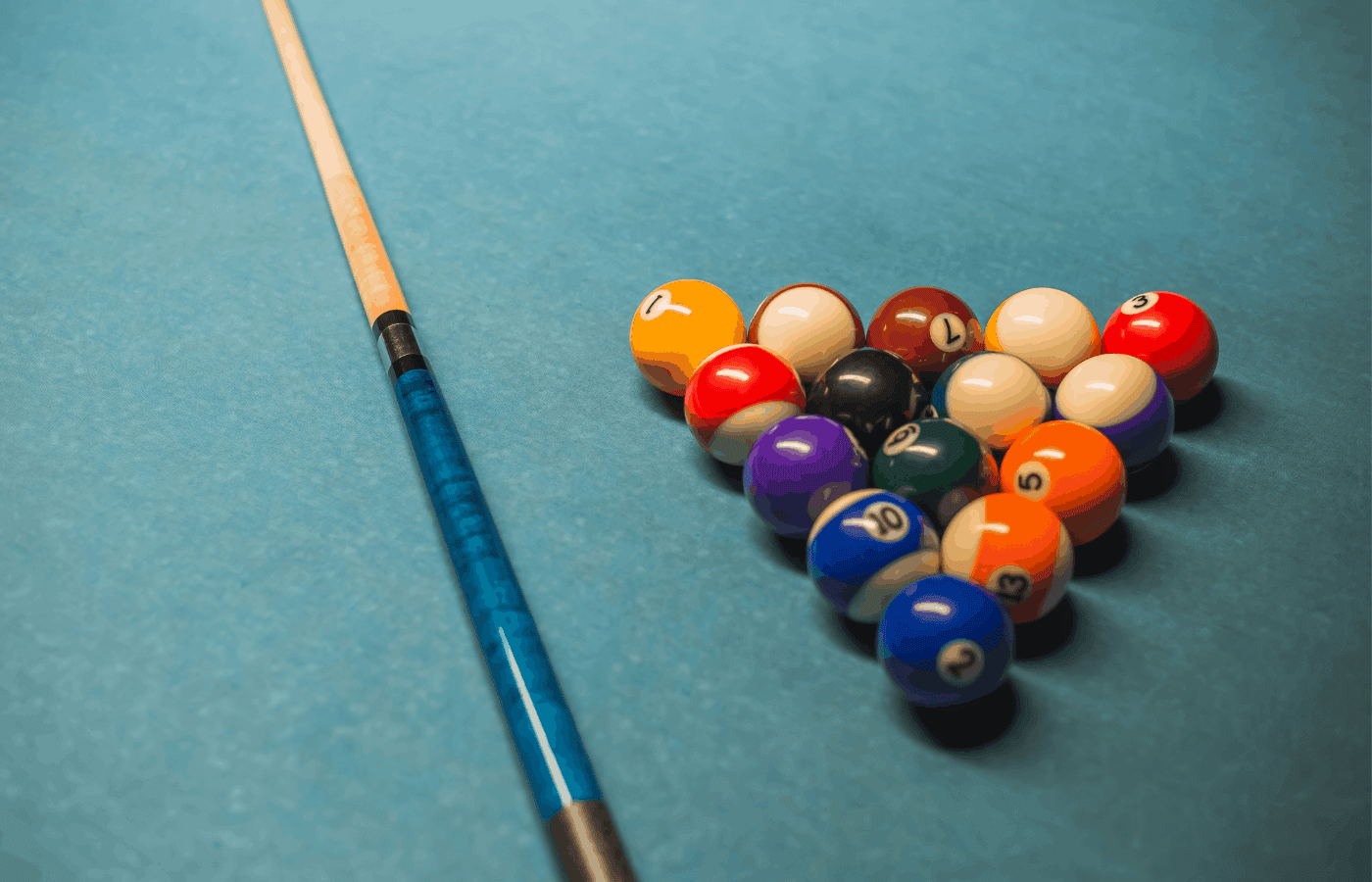 Every pool cue is weighted in a slightly different way, each having its own “balance point,” or center of gravity. This balance point is different in many different pool cues, but generally falls into two categories, forward weighted vs. rear waited, or back waited. The major differences between forward and rear weighted cues mostly come down to preference and feel, although there is a tangible difference in shots.

In this short article, we’ll go over the major and minor differences between forward and rear weighted pool cues, what each could be good for, and the reasons some people might prefer one over the other. We’ll also touch on the overall weight of pool cues used by professionals!

This can have to do with the type of shots they like to take, their shot form, or just be a “feel” thing. Some players say they are able to hit with more power with more weight in the front of the tip.

Some players claim that balls roll shorter off of forward-weighted cues, so players who prefer that style of shot tend to lean towards cues with their center of gravity closer to the tip.

Many players prefer rear-weighted pool cues for a number of reasons. Depending on the type of shot that the player likes to do, it is possible that rear weighted pool cues create a larger moment of inertia, meaning they have less pivot in the shot. This can be good for many players, especially those with piston-type shots that are less than perfectly straight.

However, for players with perfectly straight shots, this makes less of a difference. Still, it can help, and according to players who swear by rear-weighted pool cues, it often does!

Which Cue is Better?

For many, the center of gravity on the cue is simply a preference choice. Whether most players prefer a pool cue with its center of gravity towards the tip of the cue (forward or front weighted) or in the back (rear or back weighted) is something they just feel out over time.

There isn’t too much rhyme or reason as to why players make this choice, it just comes down to what they prefer, and what is more comfortable and successful for their shots.

Preference is the most commonly cited reason for choosing a center of gravity for your pool cue. However, just because any center of gravity could work, doesn’t mean you should ignore it when you are buying or trying out different cues. How comfortable you are with a particular cue makes a rather large difference in how accurate and strong your shots are going to be.

Make sure to try a number of shots with a number of cues with different centers of gravity to see which one fits best for your style of play.

However, preference isn’t the only contributing factor. Having a forward or rear weighted pool cue does make some differences as far as shot mechanics, ball speed, and inertia.

This Lucasi Custom Super Birds-Eye Pool Cue on Amazon is beautiful, accurate, and is of superior quality.

When a pool ball is struck, there will always be some deviation in your cue from an exact straight line, even if it is too small to make a difference (which is what you want). A shot’s rotary inertia is its resistance to this pivoting, or change of direction.

Rotary inertia is changed by cue weight and length, but also by the cue’s center of gravity. For forward weighted pool cues, the moment of inertia at the point of impact is shorter.

If you have an extremely straight shot and use the piston shot form, in which you do not move your shoulder, and just swing your elbow, keeping the rest of the arm fixed, then a forward weighted cue is probably not for you.

This is because it will have a shorter moment of inertia, meaning your cue will be more susceptible to pivoting during your shot. If you use a piston shot form that is particularly straight and rigid, a rear-weighted pool cue might be for you.

However, if you use a less rigid and straight shot form, such as the pendulum motion, in which the shoulder and elbow both move in a fluid motion, you might like a forward-weighted pool cue. The shorter moment of inertia that comes from having a forward-weighted cue will be helpful because you’ll have an easier time adjusting during your shooting motion.

Inertia is a very complicated thing, and perhaps shouldn’t be taken too much into account, especially for beginners. A lot of inertia is what people mean when they describe the “feel” or “touch” of a shot. This means this can be figured out by trial and error. It’s there, but you don’t have to sweat it too much!

Whether your cue’s center of gravity is closer to the front or the back is of no concern. However, the overall weight of your cue is pretty important. Pool cues come in many different weights, from around 15 ounces to nearly 28 ounces. This is a rather wide range.

However, professional players (and most good players) use a standard of 19 to 19.5 ounces. This lightweight will allow you to shoot quickly and handle your cue well without it feeling cumbersome. If you mean to be serious about your pool play, try to have a cue that is between these weights.

So, there are a number of reasons to get a back or rear-weighted pool cue, and reasons to get a forward-weighted cue as well. One of these options is no better than the other. This will mostly come down to trial and error and pure preference, although there are some things, such as inertia and ball distance that can guide your decision.

Make sure that whatever cue you get is the proper weight. Between 19 and 19.5 ounces is pretty much optimal. Beyond that, there’s not much more that’s not just up to you.

The only way to know which cue you’ll really like is to test some out. So what are you waiting for? Get to the nearest pool hall and try out some forward and rear weighted cues today! You never know which one you’ll end up loving.