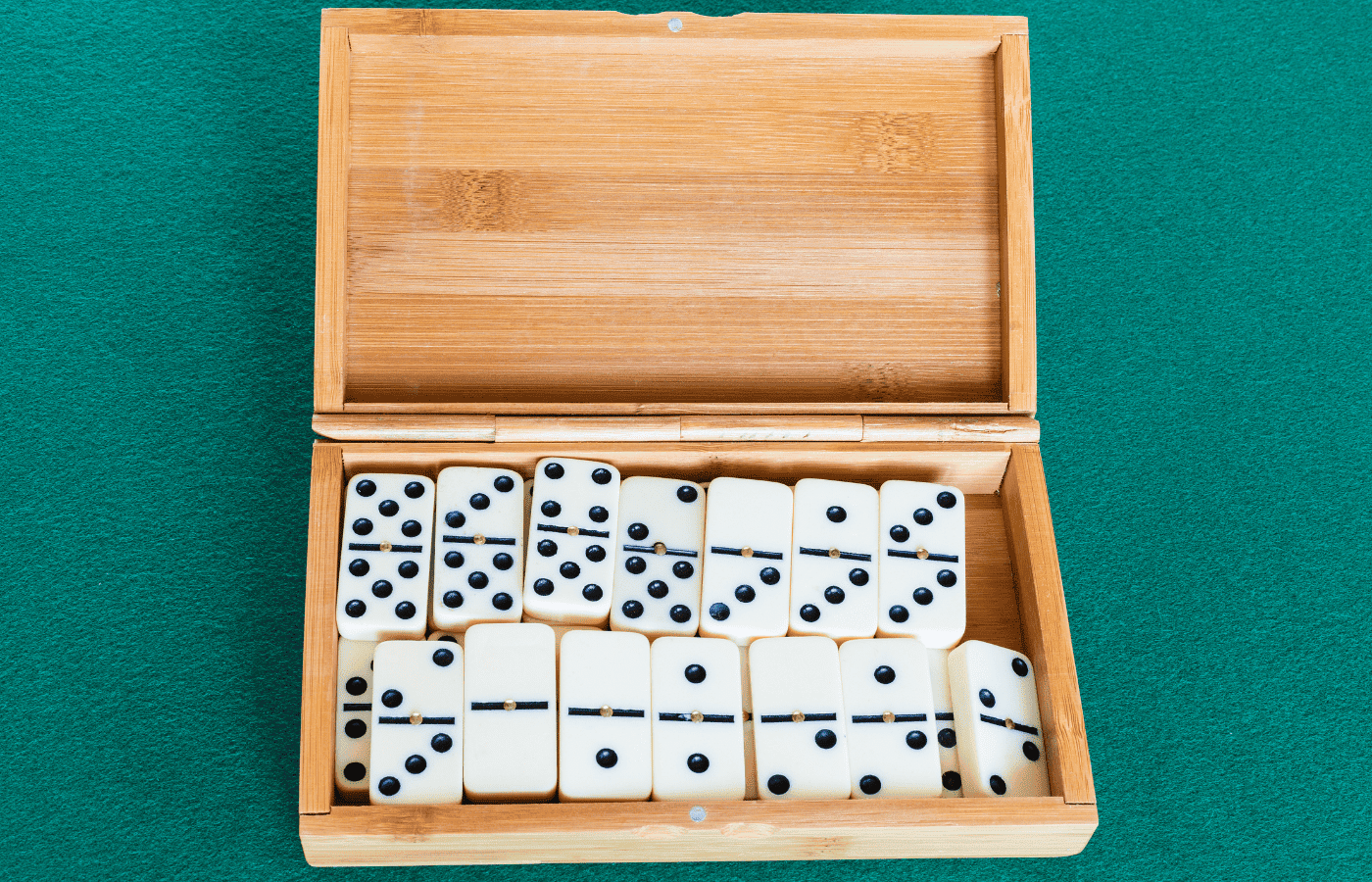 A standard set of dominoes contains 28 dominoes. A set of 28 dominos is the most commonly utilized set when it comes to playing the most popular domino games such as Domino Whist, Matador, and Muggins.

The maximum number of dots, also called pips, showing on one side of the domino determines the size of the set. Depending on the set being used, the number of pieces in a group of dominoes can range from 28 to 190.

Continue reading to discover the how many dominoes are in a wide variety of dominoes sets.

Dominoes are a type of game item that is tiny, flat, and rectangular. Dominoes are formed from stiff materials such as wood, bone, or plastic.

Dominoes have identifying markers on one side and are blank or equally patterned on the other. The game of dominoes is similar and traditional, like playing cards, of which they are a variation.

Each piece’s identity-bearing face is divided into two squares by a line or ridge. Each side of the dominos is marked with an arrangement of spots like those seen on a die. However, some squares are left blank.

How Many Dominoes Are in a Standard Domino Set?

A standard set of dominoes has 28 dominoes, with the maximum number of six on each side, known as a double-six set.

Each domino is referred to as a tile, and the dots on each tile are referred to as pips. There are 168 pips or dots in the conventional 28-domino set.

What is a Standard Domino Set?

Dominoes are a family of tile-based games with a variety of gameplay elements. A domino set often called a deck or pack, is a collection of gaming pieces. A typical European domino set consists of 28 tiles. These tiles contain spots with counts ranging from zero to six.

Like playing dice or cards, a domino set is a piece of generic gaming equipment that may be used to play various games.

How Many Dominoes Do You Need When Playing With Multiple Players?

How Many Dominoes Are in a Double 6 Domino Set?

The most common size of dominoes set is a set of double-six dominoes. Most conventional domino games may be played with a double-six set. A double-six set with 28 tiles is easier to manage than some more giant sets and takes up less tabletop area.

To check the current price and availability of Double Six Professional Dominoes, click here to view the listing on Amazon.

How Many Dominoes Are in a Double 9 Domino Set?

You can play more difficult and technical domino games using a set of double-nine dominoes. They may also utilize them to spice up basic games or allow more people to participate.

What Games can you Play with a Double 9 Set of Dominoes?

Chicken foot, Cyprus, and Fortress are some of the games that may be played using double-nine Dominoes.

How Many Pieces are in a Double 12 Domino Set?

You can play some of the more difficult domino games using a set of double-twelve dominoes. They may also spice up basic games or allow more people to participate.

What Games can you Play with a Double 12 Set of Dominoes?

Mexican Train, Solitaire, Double-Six Domino Games, and Double-Nine Domino Games are some of the games that may be played using double-twelve Dominoes.

How Many Dominoes Are in a Set of Double 15?

There are 136 distinct tiles in a Double-Fifteen domino set. A double 15 set lets you play some of the more complicated domino games and can accommodate more people than a smaller domino set.

Double-Fifteens require and are best played with 10 to 12 players.

A center line separates either end of a Double-Fifteen domino tile, denoting one of sixteen suits represented by numerous pips ranging from empty to 15.

There are a total of 2,040 spots on a Double-Fifteen domino set.

How Many Dominoes Are in a Double 18 Domino Set?

A Double-Eighteen domino set has 190 unique tiles, each of which is twice if it is broad. Double-Eighteens are best suited for games with ten to sixteen players.

A center line divides either end of a Double-Eighteen domino tile, marked with one of nineteen suites denoted as several places ranging from 0 to 18.

Nineteen tiles make up a suit. Each contains nineteen members with its spotted suit value indicated on one end or both ends for doubles. On a Double-Eighteen domino set, there are 3,420 spaces in total.

How Many Dominoes Are in a Cuban Set?

Cuban dominoes is a block domino game played with 2 to 4 players. In order to play Cuban dominoes, a Double-Nine domino set with 55 dominoes is needed. These tiles will have numerals ranging from 0 (or blank) to 9 on the tiles.

How Do You Play Cuban Dominoes?

Before each player is handed ten tiles, the dominoes are jumbled face down. Your tiles should only be visible to you. Any dominoes left over and not given to a player are stored and will not be used again.

The game of Cuban Dominoes is played clockwise. The first player will be the one with the heaviest double.

If the game cannot be resumed because no player can place a tile, the person with the fewest pips remaining wins the round.

How Do You Win a Game of Cuban Dominoes?

In order to win a game of Cuban dominoes, the winner will be the first person to reach a predetermined total of typically 100 points.

What is the Most Popular Domino Set?

Larger sets are available and are famous for games with many players or for people who like to play extended domino games.