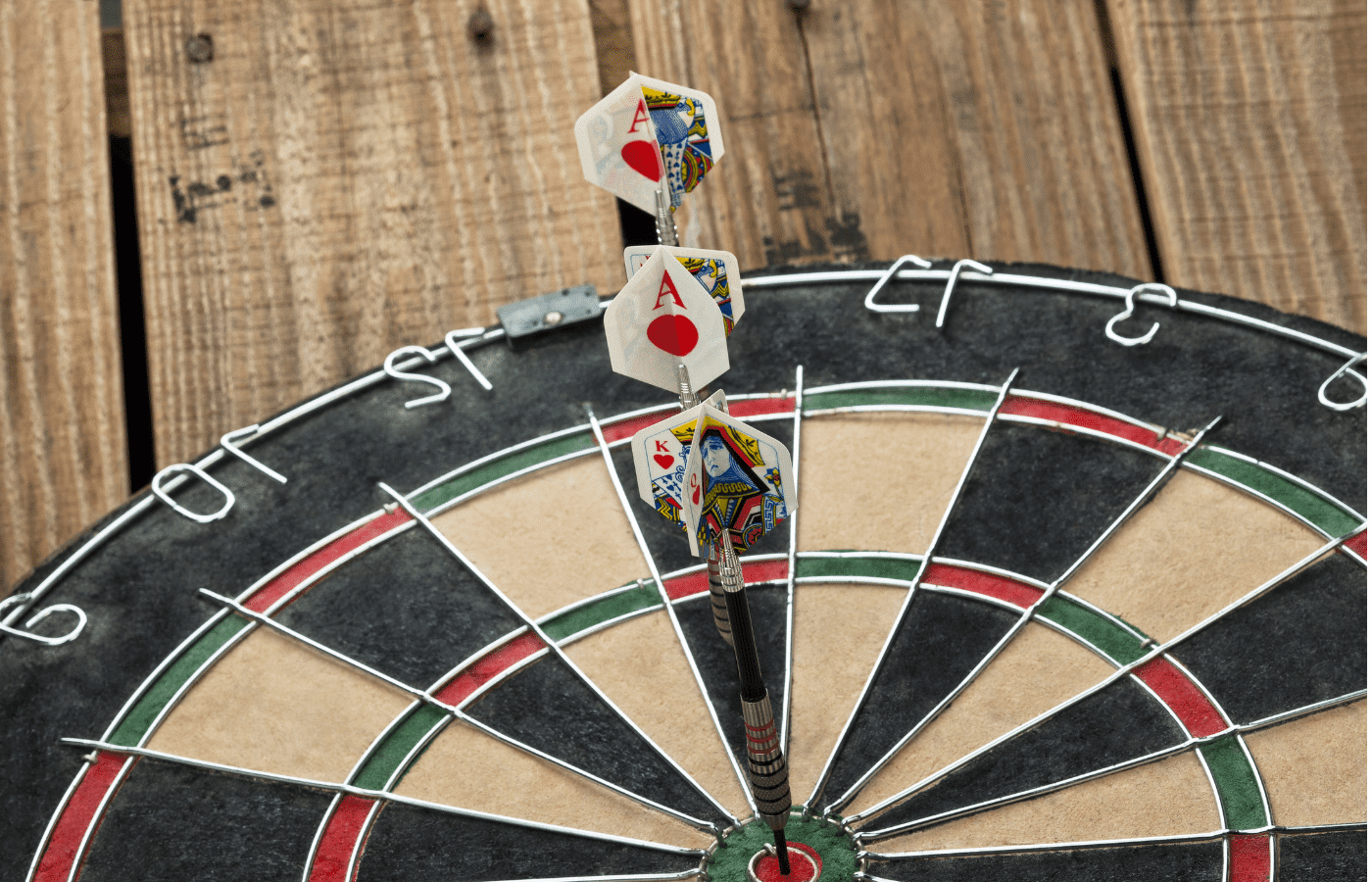 Though there are a (seemingly) unlimited amount of variations on the game of darts, none of them are quite as fun – or quite as strategic – as Prisoner Darts is. Sure, on the surface, this game looks pretty simple and straightforward.

But there are twists, turns, and a myriad of strategies you’ll have to use to become the winner of this game – some of them stranger than anything else you could play with darts in your hand! At the end of the day, though, this results in a very fun game that’s perfect for beginners and veterans alike.

No, this isn’t the kind of game of darts you’ll want to play for money if you are brand-new and find yourself in a strange barroom. But it is a great game to get into with family and friends, and maybe one that you can hustle a little money at when you fell comfortable enough to play in tournaments.

Below we dig deep into almost everything there is to know about how to play prisoner darts. By the time you wrap up this detailed guide you’ll have a better idea of what you need to play, the basic rules and strategies, how to keep score in the game, how to win, and a handful of tips and tricks to make you a better player.

Prisoner Darts at a Glance

At the start of the game, every players aims for the bulls-eye to see who goes first. Next, each player gets a single turn to throw the dart at the board which starts from 1 and goes to 20. Players may acquire more darts to throw by picking up :prisoner darts”

The first person to get to 20 wins, but there are a few caveats along the way which is why this game is named prisoner darts. Read on to discover the pitfalls you may encounter while playing.

What You Need to Play Prisoner Darts

At the very least you’ll need to people to play the game of Prisoner Darts, though this game is specifically designed to be played by large groups of people – as many as 20 or more, if you can hustle up that many players at once!

Two players need to be ready to rock and roll at a minimum, though.

You’re also going to need to have enough darts on hand for every player to be able to throw at least two darts per round.

You could probably get away with having just two darts to hand out to each player when their turn starts, but most folks are going to have at least a dozen or more darts on hand to play different games.

The more darts, the merrier!

Aside from that, you’ll obviously need a standard dartboard, a chalkboard to keep score, and that’s pretty much it.

We recommend using a high quality bristle dartboard by Winmau, like this one on Amazon. Winmau is one of the most trusted and popular brands in the name of the sport, and with proper care, will last you for years to come.

Decreased bounce outs, and better overall performance is what you can expect when using a high quality dartboard.

You’ll be ready to go as long as you square away all of these “essentials”.

The basic rule set for Prisoner Darts is pretty simple and straightforward, and one that you won’t have any trouble memorizing whatsoever.

The entire object of the game is to be the first person in the entire group to shoot “around the horn”, recording a dart in each number on the dartboard from one all the way to 20.

You will have to move clockwise around the dartboard, though, bouncing around to hit each number as they alternate.

You don’t necessarily have to keep score every round as long as everyone remembers where they last left off. With larger groups of players it’s not a bad idea for everyone to record their temporary position as things can get kind of hectic.

The game begins with every player throwing a dart at the bull’s-eye, with the player landing closest to the bull’s-eye going first. If two players both hit a bull’s-eye (or are of equal distance from the center) then they have a head-to-head “throw off” to see who goes first from there.

Generally, at the end of every round the order is reversed though you can always have it set to the winner throwing first and then figuring out and order from there.

After the order has been established, each player has a single turn to throw a dart at the board. Every player starts at the number one, and as long as that number has a dart stuck in it (anywhere on the playable area) that number is considered “scored”.

If, however, a player misses the dartboard – landing outside the doubles ring or bouncing off of the dartboard completely – then the player records no score whatsoever.

Here’s where the twist for Prisoner Darts comes into play, though.

At the end of the game, it’s possible to have a whole bunch of darts in your hands that weren’t even yours to begin with, but darts that you were able to capture or free as you went through the game itself.

The game continues on and on until a player hands gotten a dart to score in every single playable number (one through 20), with the first player recording that “around the horn” movement being declared the winner.

How to Keep Score in Prisoner Darts

As we highlighted above, with a handful of people (maybe five or six playing all at once) you don’t necessarily have to record the last number you scored with your previous turn as long as everyone remembers where they last left off.

When you get larger player counts, or want to track score a little more accurately, it’s not a bad idea to use a chalkboard, a whiteboard, or even just a piece of paper to map out everyone’s progress around the horn.

When you decide to lockup a prisoner – or free one – is going to be entirely up to you, but it’s important to remember that the strategy behind this decision is going to change every single round.

You don’t necessarily turn any extra points by freeing a prisoner dart so much as you earn the potential to get an extra throw or an extra dart your next spin around.

How Do You Win at Prisoner Darts?

The only way to win at the game of Prisoner Darts is to be the very first person to go from 1 to 20 (clockwise) on the dartboard and score in a playable area for every single number.

That might take some particularly skilled players eight turns or so, but it also might take players 40 or 50 turns – especially if darts continue to get locked up along the way and yours get liberated by other players.

This is why it is so critically important to pay attention to where other players are on the dartboard when you are considering going after prisoner darts.

Sure, you might score a couple of extra throws that you wouldn’t have had otherwise by liberating a prisoner – but if someone is one or two throws away from winning (and is particularly accurate) that may not be your highest priority.

You really have to think your way across the board when you are playing Prisoner Darts, that’s for sure.

There are a couple of different tips and tricks you’ll want to use really dominate the game of Prisoner Darts, but nothing beats getting really good – and really accurate – with your throws.

Remember, you’re only going to have a limited amount of darts each turn to throw at the board and every single one of them needs to counts. You might also need the accuracy to liberate other prisoners to add to your arsenal, especially if you have fallen behind a little bit and need a few extra throws to catch up.

One of the most effective strategies in this game involves making the decision between pursuing the next few numbers on the board towards 20 or trying to capture new prisoner darts.

Some players are going to almost laser focus on liberating prisoners to gain extra darts even though they are close to the finish line, forgetting the mission completely and wasting more time – and potentially losing – along the way.

Others are going to be overconfident in their abilities to win, waste a few throws, and maybe lose the game when an extra dart or two (if they focused on a prisoner) could have made all the difference.

Prisoner darts is a game of immense skill since you will only be throwing one dart at a time. It’s also a great way to practice on aim since you have to make every shot count.

At the end of the day, it’s really all going to come down to feel, measuring up your opponents, and generally just going with your player instinct.

You’ll be able to hone and develop your instinct as you get more and more games of Prisoner Darts under your belt, relying on your experience to help you know when to push to the finish line and when to do a jailbreak!