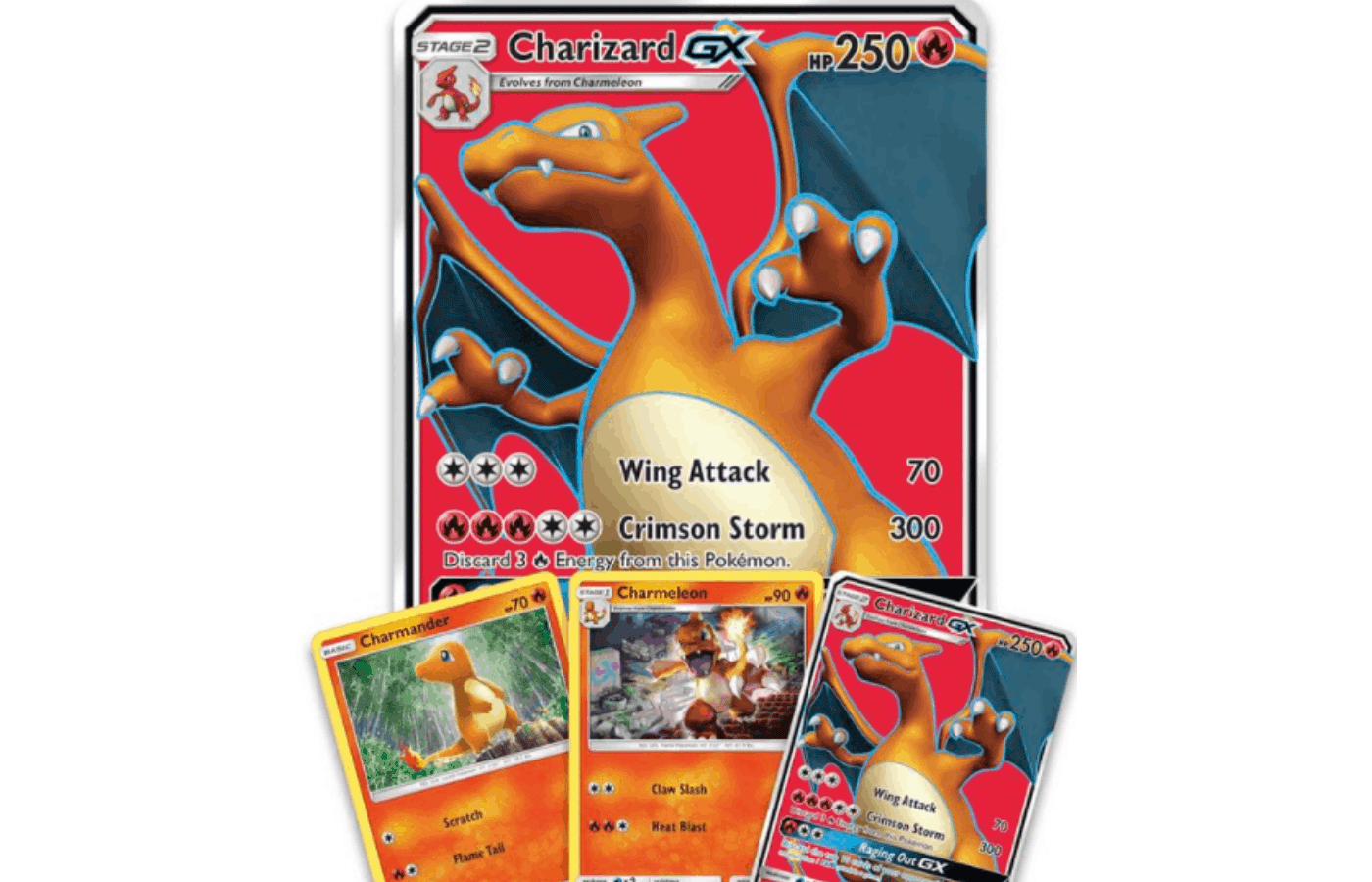 Pokemon cards have continued to evolve since they were first introduced in the 1990’s, when the strongest card was Charizard. Since then, many cards have been added that not only deal significant damage but have additional effects as well.

From cards that actually deal 300 damage like the Mega Rayquaza or the next evolution of the card that started it all, to cards with the potential to dole out 300 like Mega Gengar, they’ve even created a card that does 1,000 damage that was only available as a promotional card.

Whatever you’re looking for, though, there are things to look at when deciding on which Pokemon cards to invest in. With that in mind, let’s look at some 300-damage cards and some that might not quite do 300 but would be a great addition nonetheless.

What Are the Best 300 Damage Cards?

Without a doubt, one of the greatest 300-damage cards available has to be the next-level Charizard GX. With 250 HP, it’s move Crimson Storm costs 3 fire and 2 colorless energy to destroy the opponent. However, it does lose 3 fire energy in the process.

The good news is that it also has Wing Attack, which needs 3 colorless and deals a modest 70 damage while you get more fire.

Aside from Charizard, the next heavy-hitter is Mega Rayquaza with 230 HP.

If you get 3 fire, 1 electric, and 1 colorless energy together, you can unleash Dragon Ascent but keep in mind that you’ll have to pick 2 energy to remove. Unlike Charizard, though, Rayquaza doesn’t have another offensive move.

While they may not necessarily do 300 damage, there are 2 cards that have the potential to so they’re worth noting. Mega Tyranitar is one such card with it’s move Destroyer King. This move has a base damage of 110 plus 60 for every damage counter on the opponent’s Pokemon.

If there are 3 or more counters, that’s already 290 damage for 2 dark and 2 colorless energy.

The other card is Mega Gengar with 220 HP and arguably the highest damage potential here, because Phantom Gate allows you to steal the move of an opponent’s attack.

That means that, once you have 1 psychic and 2 colorless energy, you can mimic a 300-damage move or even, if you’re playing someone that has it, the only attack in existence that does 1,000 damage.

Though it was only available as a promotional card, Shadow Lugia is technically the strongest Pokemon card in the world with 300 HP. It’s move, Shadow Storm, needs 4 psychic energy to send 1,000 damage at your opponent with no energy loss.

Some of the things to keep in mind when you’re looking for a card that does 300 damage are the cost to use the move, the cost to retreat, how much HP the card has, and any additional effects or moves the card possesses.

Every card has a retreat cost associated with it, which might be a sound tactic when the strongest card in your deck is reduced to 10 HP, or Hit Points. On that note, how much it can get hit and stay out there should be a factor for your consideration.

Of course, none of that matters if you can’t use the move so pay attention to the cost for the move. Being 300 damage, none of them are cheap by any means but some require a sacrifice of energy that might affect multiple uses.

It’s also important to know ahead of time that any card with the “mega” evolution has the rule of gameplay that will end your turn as soon as you evolve them. Since many on this list are “mega” cards, that’s a tactical decision to factor in which one is better for your deck.

What are the Best Cards Close to 300 Damage?

If you’re looking for cards to boost your deck but may not have the money for some of the ones mentioned above or need cards with more tactical advantages, these are some of the best options out there.

With 230 HP, Venosaur finally got an upgrade to Mega Venosaur. It only has one attack, Crisis Vine, for 3 grass and 1 colorless energy, but that move is devastating. Not only does it deal 120 damage, but it poisons and paralyzes the Pokemon on the other end.

Another promising addition is Mega Sceptile EX, which has 220 HP and the move Jagged Saber. For only 1 grass and 1 colorless, Jagged Saber deals a respectable 100 damage but you also get the choice to attach 2 grass energy to any benched Pokemon and remove all damage.

Where Mega Sceptile EX has a team-boosting attack, though, Mega Blastoise will decimate the opposing team. Once again, Mega Blastoise has just one attack but Hydro Bombard gives 120 damage and splashes 30 damage to 2 of the opponent’s benched Pokemon.

The move costs 3 water, making all of these cards relatively low-cost for what they produce in damage and effects. They’re also generally less expensive than the 300-damage cards, so you’ll be more likely to add them to your deck.

Once again, the best card in all of Pokemon is technically Shadow Lugia with a high number of HP and the ridiculous amount of damage of an attack for only 4 psychic energy without repercussions. However, more accessible, it would be either Charizard GX or Mega Rayquaza.

They cost 2 and 3 colorless energy to retreat, respectively, but the combination of their moves and damage makes them dangerous if you can keep them alive. Still, you have other options for high damage potentials with cards like Mega Tyranitar and Mega Gengar.

If you want to bolster the damage output of your deck or support your team with bonus effects like paralyze or healing, though, there are some great cards available. Mega Venosaur or Mega Blastoise can change the direction of your game with a single move if you have the energy.