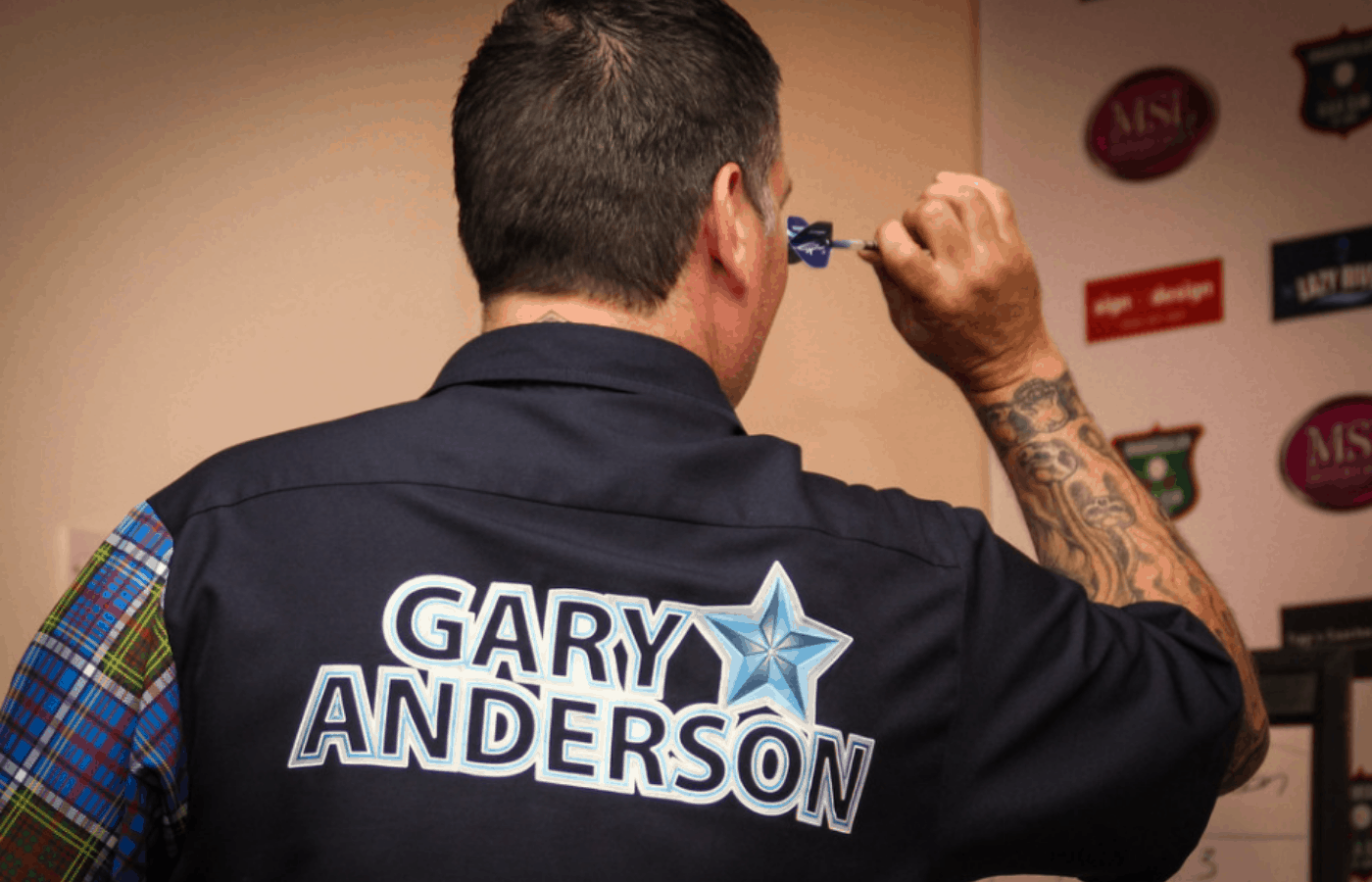 Gary Anderson has long been regarded as one of the best players in the dart world. It should come as no surprise that so many people want to match the equipment that he uses. So, what darts does Gary Anderson use?

At the moment, Gary Anderson uses Unicorn Maestro Phase 3 darts. Since he has a long-term contract with Unicorn, it seems that this is a set of darts that he is going to be using for an incredibly long time to come.

We do want to tell you more about these darts, as well as Gary Anderson as a player. So, let’s expand on a few of the things that have happened in his career, as well as give you a bit more of an idea of the equipment that he uses, shall we?

What Weight Darts Does Gary Anderson Use?

Gary Anderson uses 23-gram darts. Although he has used a few different sizes in his years in the sport, it seems that he has started to hinge himself on the 23-gram dart weight, which is great since this weight is going to be ideal for many people.

What Darts Does Gary Anderson Use?

Gary Anderson currently holds a long-term contract with Unicorn Darts. While he does have his own signature series, they are really just a fancier version of another set of darts offered by the company. As long as you pick up the Unicorn Maestro Phase 3 darts, then you are going to be playing with the same darts that Gary does. Let us tell you about a few of the features that you can expect from them.

As we said before, Gary Anderson relies on 23-gram darts. He knows how to play with them. He is not going to be a huge fan of playing with 24-gram darts or even 23.5-gram darts. This is something that could completely mess up his game.

This is why you will be pleased to know that the Unicorn Maestro Phase 3 darts come fully weight-certified. There is never going to be more than a 0.1-gram difference from the quoted weight. This means that if you are throwing them, you are going to be able to enjoy playing with a set of darts that really does weigh 23-grams. You are going to be playing as if you are a pro.

These darts are 52.3mm in length, which is about the standard for darts like this. This means that the transition to using these Unicorn Darts shouldn’t be too difficult if you are used to playing darts. You are going to be able to get to grips with them nice and easily.

The diameter of these is 6.4mm, which is about a middle of the road diameter. They provide enough thickness to give you a good grip, but not so much that you are going to be struggling on the release.

Again, this is something that you are really going to want to be looking for when it comes to playing with a decent set of darts. It doesn’t matter whether you are a new or experienced thrower.

These darts are 90% tungsten, which gives them their weight. The tungsten also helps them to sail through the air much more cleanly. This, hopefully, should allow you to ensure that the darts land right on target. This is one of the reasons why Gary Anderson loves these darts so much. He just loves how accurate they are when it comes to landing on target.

All of these darts come with ultrafly flights. These flights are well known for their ability to ensure that the dart hits the target exactly when you want it to hit the target. It isn’t going to be sending that dart off course or anything like that.

It is worth noting that Gary Anderson does not always use the ultrafly flights. He does shake things up from game to game, and sometimes he doesn’t even use flights that have been produced by Unicorn.

We suggest that you do not worry about this part too much. People change up their flights all the time based upon what they are trying to accomplish. It doesn’t mean that the flights that they are using are terrible. No product from Unicorn is terrible.

This is not the standard version of the dart. However, it would be amiss of us not to point out that Gary Anderson does have a black version of these darts out. They are known as ‘noir’.

The main difference between these and the standard darts is the fact that the Noir darts come in a presentation box. They also have an engraved signature from Gary Anderson. If you are a huge fan of his, then it may be worth checking them out.

While Gary Anderson did kick off his career with a win at the Welsh Open in 2001, we are sure that even he would admit that his career got off to a slow start. He had a couple of minor successes here and there, but this was coupled with him losing in the first round for several events too.

It wasn’t until 2007 that his career really hits its stride. He was able to pick up both the International Darts League and World Darts Trophy. Shortly after, he was lucky enough to pick up both the BDO British Open and 2007 Scottish Open. He was able to beat off many players that were classed as being far, far better than him at the time. He just left them in the dust.

Over the following years, he was able to pick up many different championships and league wins, further cementing himself as one of the best players that has ever competed in the world of darts.

In recent years, he hasn’t been competing anywhere near as much as he did in the past. However, if you are lucky enough to see an event featuring Gary Anderson, then you can be sure that the fella is going to be putting on the performance of a lifetime.

He may no longer win every event that comes his way, but you can still see the raw talent the guy has. Pair him with his darts and he is going to be fighting to the very last minute. This is not a guy that loses easily.

Gary Anderson is one of the most accomplished players in the world of darts. He has won just about every major event under the sun.

If you are looking to play with the same darts that he does, then you are going to be looking for the Unicorn Maestro Phase 3 darts. These are the exact darts that he uses on the circuit, although he does modify the flights from time to time depending on what he is looking to accomplish with his darts and the board.

If you are a massive fan of Gary Anderson, then you may want to check out the Noir version of his darts. They just have a slightly better look that the normal version, but they do carry the price tag to boot.