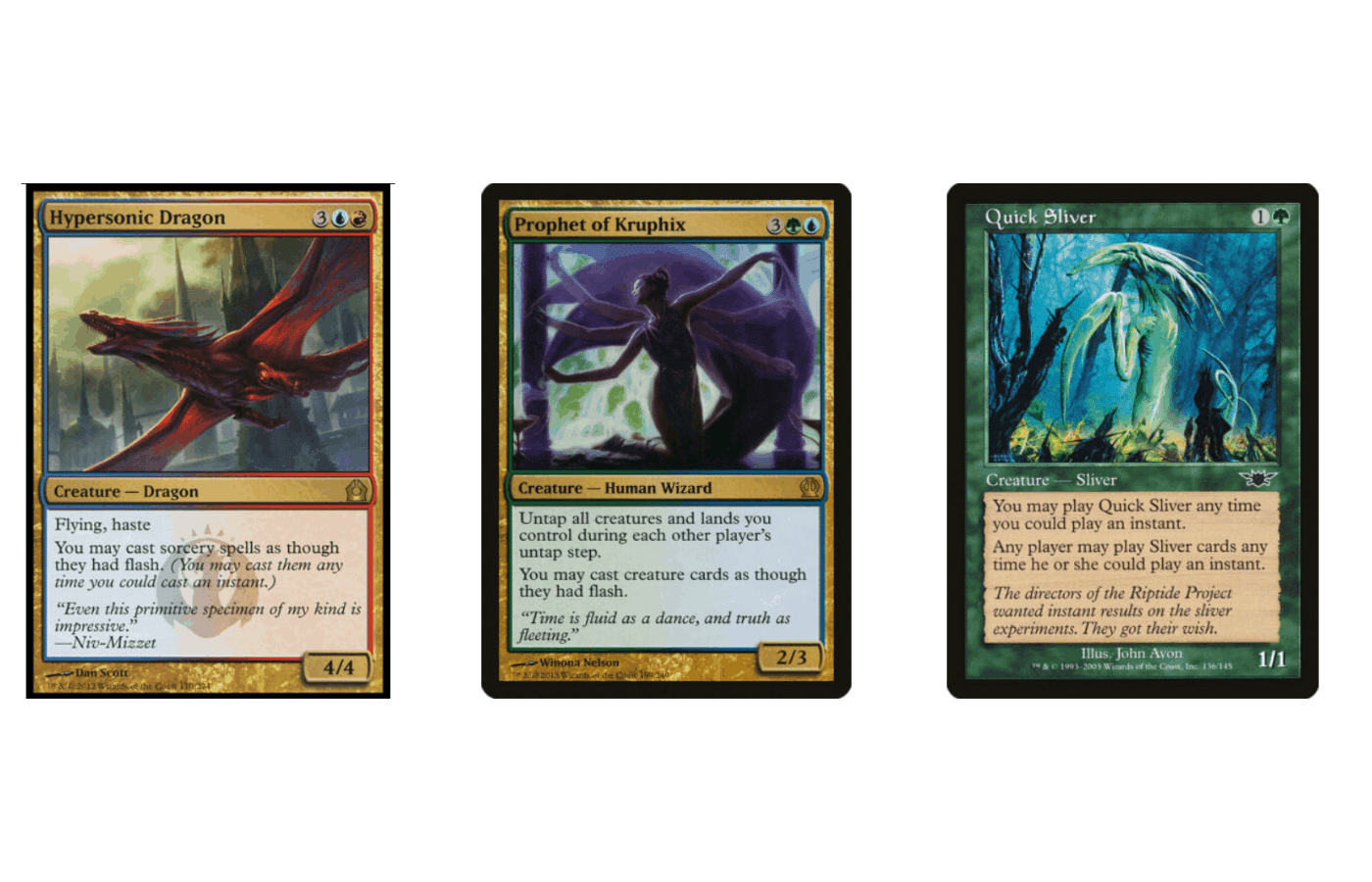 The flash keyword indicates a card that can be cast whenever you want in the game. It works much the same way as an instant insofar as the fact that you can cast it both during your turn and your opponent’s turn.

Let’s expand on this a little bit. This is because there are a few intricate things that you can do with Flash.

Do Creatures With Flash Have Summoning Sickness?

Of course, if you do have a creature with both flash and haste, then your creature won’t have summoning sickness. You will be able to play it as you normally would. However, most cards with haste and flash are not really all that viable in Magic: The Gathering unless you end up building a deck around it.

Why is Flash Good in MTG?

Perhaps the main benefit of Flash cards, and the reason why people build flash decks, is because they can completely slow down the flow of the game.

Normally, when you play a card in Magic: The Gathering, you are doing so while trying to guess what your opponent will do. This means that you are playing one move ahead of your opponent, which gives your opponent time to counter whatever you did on your move.

You are not going to run into that problem if you load up your deck with flash cards. The brilliant thing about flash cards is that you are going to be able to react as soon as your opponent plays their card. As a result, many of people with flash decks will try and hold back a small amount of mana. Or, in some cases, all of their mana. When they pass play over to their opponent, they will react accordingly.

If somebody is not prepared to deal with a person playing a Flash deck, then they are going to run into all sorts of problems with this play style. It means nearly every single one of their movements has the ability to be effectively countered.

In some cases, you may want to wait to play your instant cards when your opponent has run out of land. This means that you are going to be able to get your cards out without the risk of them being countered, which is always going to be a big plus in the modern game of Magic: The Gathering.

Do Instant Spells Have Flash?

No. While the cards do perform in the same way, they are not classed as the same card type. So, if there is a spell that counters an instant, it is not going to be able to counter a card with flash.

Unless countering is being called into question, then you can just assume that instants and flash cards are the same. You will never get an instant that also says flash on it. The flash would be somewhat redundant.

Can Flash Be Countered?

Absolutely! The cards would be way too powerful if they couldn’t be countered.
Now, the simplest way to counter a Flash card is to have an actual counter in your deck. There are plenty of them out there. However, this is not always going to be the most effective method.

The best way to counter Flash is to try and exhaust your opponent’s land on their turn. After all, if they do not have any land that they can spend, then they are not going to be able to throw those Flash cards at you. The best part is that, at the time of writing, no actual Flash deck should have a way in which they are able to counter your land depletion. That would be a completely different playing strategy.

We are not going to be naming any specific cards here since we do not know what Magic: The Gathering format you tend to be playing. The cards that you would want to use will vary based on the format. All you need to know is that if you are planning on countering a Flash deck, then look at the cards in your format that offer the following:

Are Flash and Instant the Same?

Yes, they are. Well, at least they work in the same way. As you may well know, an instant is a specific card. It is a sorcery card.

Why Is Flash Banned in Commander?

Flash isn’t banned in Commander. Things are not as simple as that, though. Let us explain.

As you may well know, when it comes to Commander, there are no rules with regard to the sets that you are able to pull your cards from. This means that, in theory, you can create a Commander deck based around any card from Magic: The Gathering history. This means that Wizards of the Coast do not have a great deal of control over the meta of the game.

The card called ‘Flash’ was banned from Commander in 2020 as it had a massive impact on the meta of the game. It made only certain decks viable, and these decks couldn’t be effectively countered. This made the game rather boring to the bulk of people that were playing because if they didn’t force themselves into the meta, they would lose.

Don’t worry, though. The keyword ‘flash’ has not been banned from Commander. You can still use those cards however you wish in the format!

Flash is a great Magic: The Gathering keyword on cards for those players that want to control the flow of the game.

Adding cards with ‘flash’ on them is a great way to be able to hold back a little bit and see what your opponent is doing before you play your cards. They can be tough spells to counter too.

You will be able to use flash cards in Commander. Contrary to popular belief, only the card named ‘Flash’ is banned from this format.