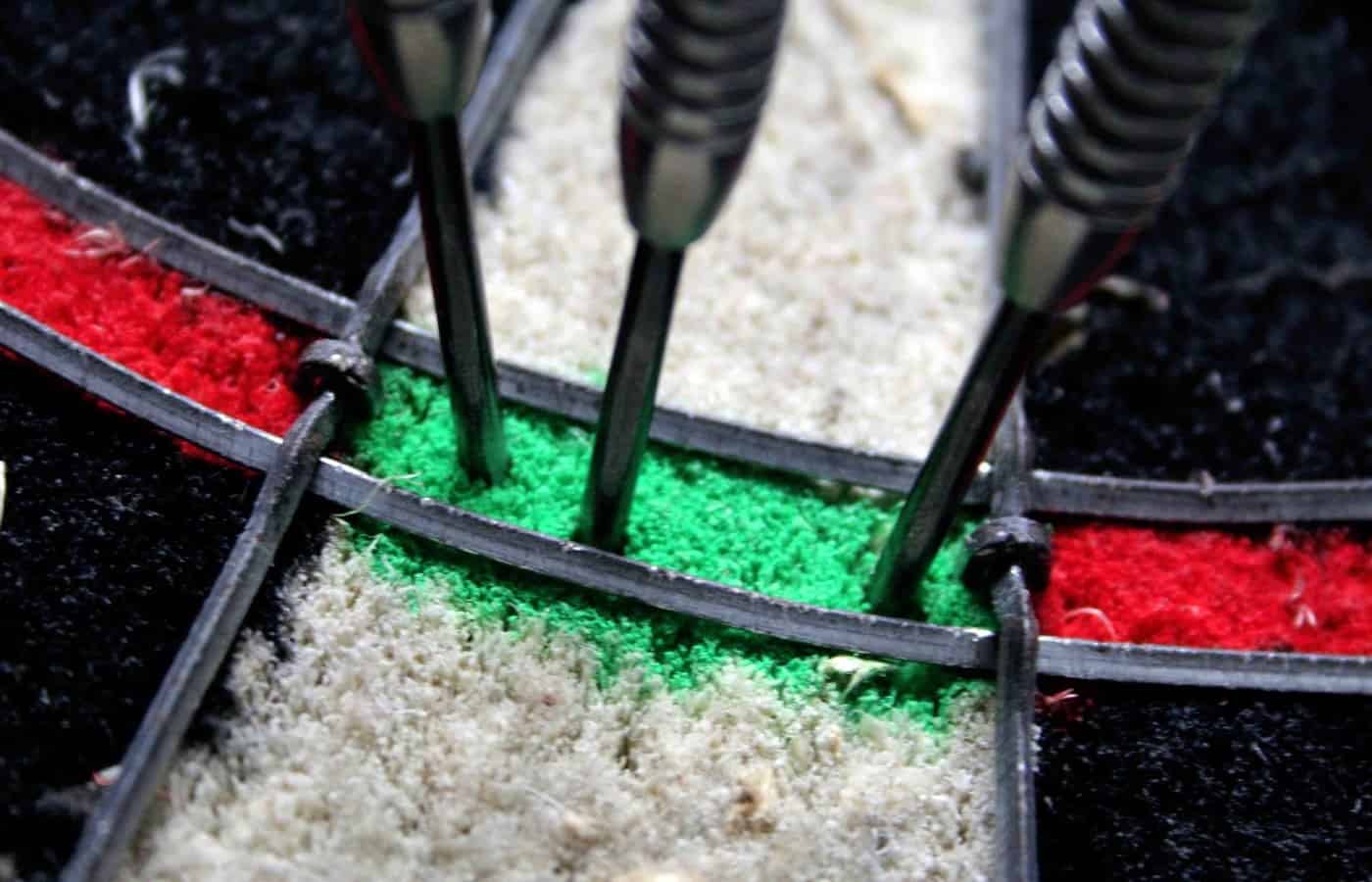 Most people watching a game of darts will know that triple 20 is the highest score possible score with one dart, but you will often see the players move from triple 20 down to triple 19. It begs the question, why do dart players go for triple 19?

There are a number of reasons for this. It is sometimes because the triple 20 is blocked by an earlier dart and they are looking for a cover shot, it could be to leave them on a specific finish, or potentially because a player has more rhythm on triple 19 and is struggling on the triple 20.

Using Triple 19 as a Cover Shot

A cover shot is used when one of your darts is blocking a bed that you are shooting for, mostly a triple 20. Choosing another triple like 19 or 18 is called a cover shot since it is too risky to throw at the 20 bed.

Triple 19 is the natural cover shot because it is the next highest shot on the board. For that reason, players will practice on this treble a lot. A few players will prefer the triple 18, Raymond Van Barneveld is a famous exponent of this.

The cover shot is a relatively new practice, back in the 80s and 90s, players like Eric Bristow and John Lowe would rather move along the oche and find an angle to squeeze the dart into triple 20 rather than find a cover shot. The advent of more practice and a change in playing styles has led to players in the last 10-15 years focusing on a cover shot more.

One other example for avoiding triple 20 will be that the previous dart is not in very firmly and the player fears if he aims at triple 20, he might knock the existing dart out, so will drop down to triple 19.

Triple 19 to Finish a Game

As the goal of darts is to finish on a double (or bullseye), sometimes aiming for the highest score with three darts (180) is not the best shot. For example, if the player is on an odd number, they will need to hit a high scoring triple to end on an even number.

As triple 19 is the highest odd number you can score, a player will often aim for this before heading towards a double. If a player has 209 left to score, triple 19 will leave him nicely placed for double 16, the most popular double in darts.

One other reason you will find a player targeting triple 19 is because they are simply struggling on triple 20 and having dropped down to triple 19 several times, they have found this to work better for them. It is very rare this will last more than a couple of legs; most players will return to triple 20 pretty quickly.

Players generally do not hit triple 19 as consistently as triple 20 because they do not practice it as much. You get the occasional player that does hit a higher percentage, for example, Michael van Gerwen hits 61% of his attempts at the 2018 Premier League Play-Offs, but as a general rule, the % hit will be lower than triple 20.

For the novice that struggles to consistently hit the number they are aiming for, sometimes triple 19 is considered a safe alternative because its surrounded by higher numbers. If you miss 20, you will generally end up in 1 or 5, whilst missing 19 will usually end with either 7 or 3, both higher options.

It is not a route players stay with for long, as they get better, triple 20 or a single 20 will always be the preferred option.

To Perform a Nine-Dart Finish

The nirvana for any darts player is to complete a nine-dart finish, meaning they clear 501 with nine-darts. The traditional route is to score 180 on your first two visits to the board, leaving 141 to finish on your last visit.

One of the most popular ways to complete that score is triple 20, triple 19 and double 12. Meaning triple 19 becomes a critical part of the most famous finish in darts.

There isn’t just one reason why a dart player would go for triple 19. There could be a seasoned veteran or a complete novice who both have totally different mindsets on why they are choosing to shoot for the triple 19.

Depending on how the darts have landed on the board can lead a dart player to make cover shots as a safe way to continue scoring. If a player is approaching the end of a dart session, it may mean that the only way they can finish is by hitting the triple 19.

Regardless of the reason, each dart player will make their own decision on the best time to start aiming for triple 19.