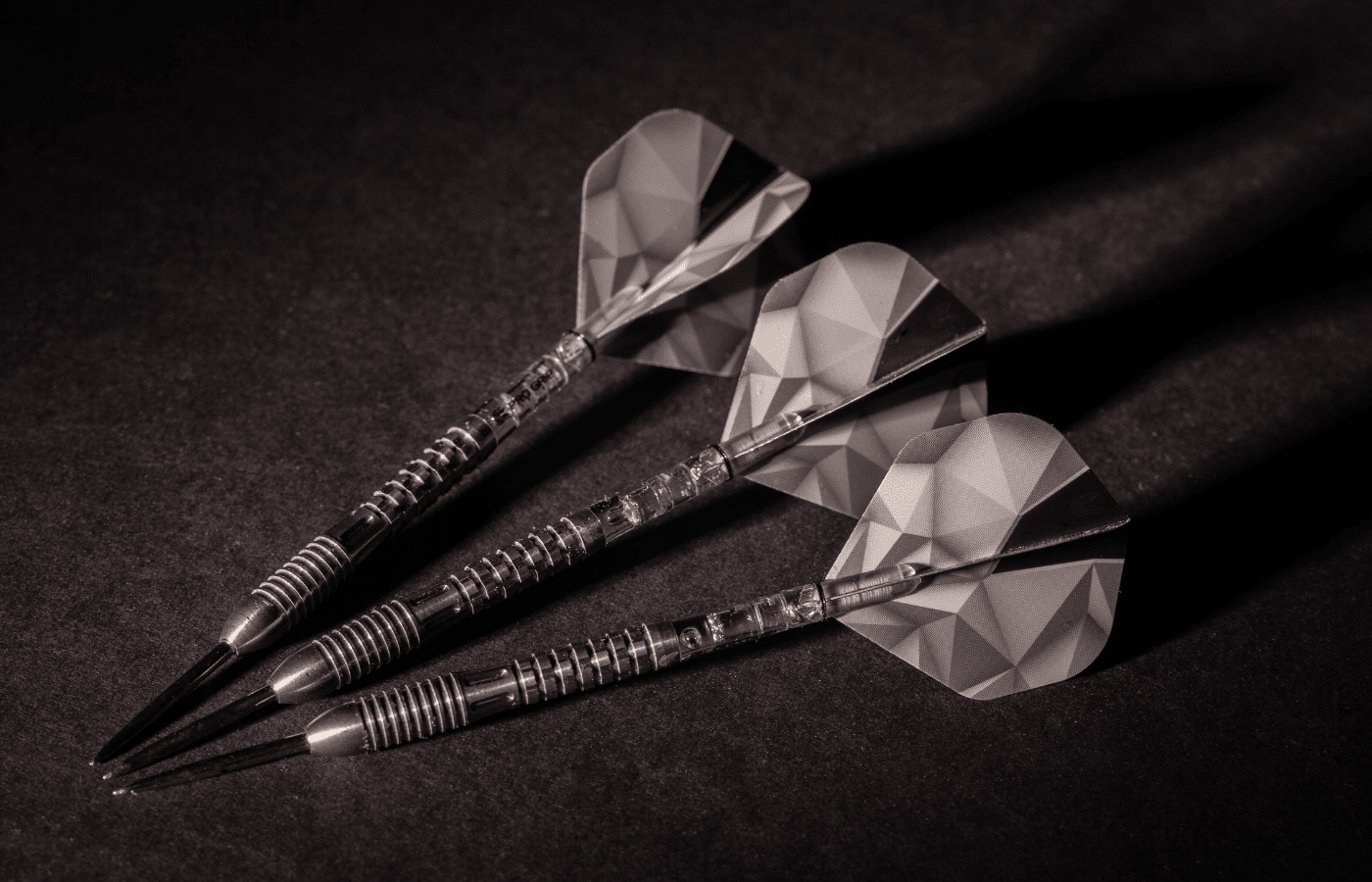 What better way to spend a weekend night out than hanging out at the bar with your friends and playing a rousing game of darts? But when collecting the darts have you noticed that some are heavier than others and wondered why that is?

Turns out just like humans have their own unique fingerprints and eye colors, we too have unique throws. The different weights of the darts affects how fast the darts fly and the curvature of the throw. The right combination of how you throw paired with the proper weight of dart, can lead you to a perfect game.

There are a lot of factors that go into making a dart for the game. The weight of the dart is one, along with where the weight is placed such as at the front or back of the dart, the size and shape of the feathers. In this article we’ll go through the different kinds of darts and what they’re each good for so the next time you’re out with friends you can bring your A-game, and win yourself a round of drinks.

What Is the Best Weight for Soft Tip Darts?

Soft tip darts, which have a removable tip for ease of replacement, tend on a whole to be lighter than their steel tip counterparts. Typically weighing in at about 12-20 grams total, there is a lot of variety between weights of darts.

Lighter darts, such as those that are around the 16 gram mark are recommended for all levels of game play, particularly beginners. The lightweight nature of the darts can help newer players perfect their aim and form without adding extra factors like a weighted barrel.

The best weight for soft tip darts is typically up to the player’s preference, but overall it’s best to start with lighter weights and work your way up. You can start with a lower weight and move the weight up by increments as you figure out for yourself what works.

What Is the Best Weight for Steel Tip Darts?

Steel tip darts have a tip made of, you guessed it, steel, that is not removable. This means if the dart tip breaks, it’s harder to get a replacement, but the steel tip does make the dart sturdier overall. In general, steel tipped darts are heavier than soft tip darts, though their weight averages can overlap.

The average darts player usually stays within the 20-26 gram weight, though some professional players who have been able to test which weight works best for them might go for much heavier darts or much lighter ones.

What Are the Different Weights of Darts?

There are many different weights of darts to choose from and the options vary from about 12-40 grams. Most players, however, stick within the 20-26 gram range. There is a rule in most competitive dart playing spaces that does not allow a dart to be heavier than 50 grams.

The weight of a dart depends on many factors such as the material the dart is made of, like steel, tungsten, nickel, and brass, or the shape and grip of the dart. Different materials are used when making the dart in order to affect how heavy the dart is, how it is shaped, what the grip feels like, and the tragectory.

What Is the Heaviest Dart Weight?

Most professional dart players won’t use anything that weighs more than 30 grams, and even more specifically the heaviest most players use is 28 grams. This does not, however, mean that heavier darts don’t exist and are never used, they just tend to be outliers in the game.

Competitions don’t allow darts that are heavier than 50 grams, so we know a 50 gram dart has existed at some point for that rule to have been created, but more likely the heaviest dart you might come across will be 40 grams.

The heaviest dart I have been able to find that can be bought online is 48 grams, a mammoth dart. To use a dart this heavy and be successful in your playing, is something best left to the professionals, and even the professionals don’t exceed 30 grams on average.

When it comes to the weight of a dart, heavier doesn’t necessarily mean a better play. In this case, it’s good to listen to the professionals who rarely use darts heavier than 30 grams.

Lighter darts are great for beginners who have not honed in the skills of accuracy yet. Their trajectory tends to be more parabolic, or curved and they take more force to throw them. The accuracy of a dart’s trajectory, unfortunately for the novices, depends mostly on the thrower.

If you’re going to be practicing a lot of dart throwing over a long period of time however, the lighter darts won’t tire your throwing arm as quickly as the heavier ones will.

The general consensus of seasoned dart players is that heavier darts fly straight through the air. This means that in order to hit that bullseye, your throw has to be spot-on accurate. The accuracy of a dart throw depends more on the player than the dart itself. There are many professional players who prefer lighter darts and many who like the heavier ones.

Heavier darts rely on the thrower to be as accurate as possible due to their straight trajectory. If you tend to throw the exact same way every time and your arm perfectly aligns with the bullseye then heavier darts can be a good choice for you.

Heavier darts, though they require less force to throw them far, their weight does lead them to wear a player out more quickly. So if you plan on practicing your throw for a few hours, prepare to have a sore arm in the morning.

How Do You Choose a Dart Weight?

The best way to choose the right dart for you is to try a few different weights out. A good place to start is darts that fall in the 20 gram range. This weight is pretty average between the heaviest and lightest darts you can find.

If you are a total novice or a brand new beginner to playing darts and your first few throws at 20 grams aren’t perfect, there is about a 50% chance that it’s the weight that’s wrong for you and 50% chance that you just need more practice.

Practice makes perfect, yes, but it is also a great way to familiarize yourself with how you throw. If you tend to throw high, then heavier weights might work better for you, if to the side, maybe lighter darts.

By beginning with 20 grams, you can figure out a starting point for yourself. It’s easy to adjust higher or lower based on how you throw at 20 and figure out what weight of dart is best for your throw.

There are many factors that contribute to how a dart performs. Weight is a big one. Knowing how weight affects the way a dart flies  toward the dart board can help you determine which weight is best for your particular throw.

Heavy darts fly straight so if your throw is accurate, heavy darts are a great choice. Lighter darts are more forgiving and great for beginners. Or perhaps what works for you is somewhere in the middle weight category. Either way, now that you understand how weight affects darts, you are able to make a better informed decision in your next competition or trip to the local bar.

Overall, it matters less the size of your dart and more what you do with it. Practice always makes perfect and it will take time to figure out what kind of dart works best for your best plays. And if all else fails, and you make a bet for a round of drinks and still, after reading all this end up losing the bet… feel free to blame the weight of the darts.