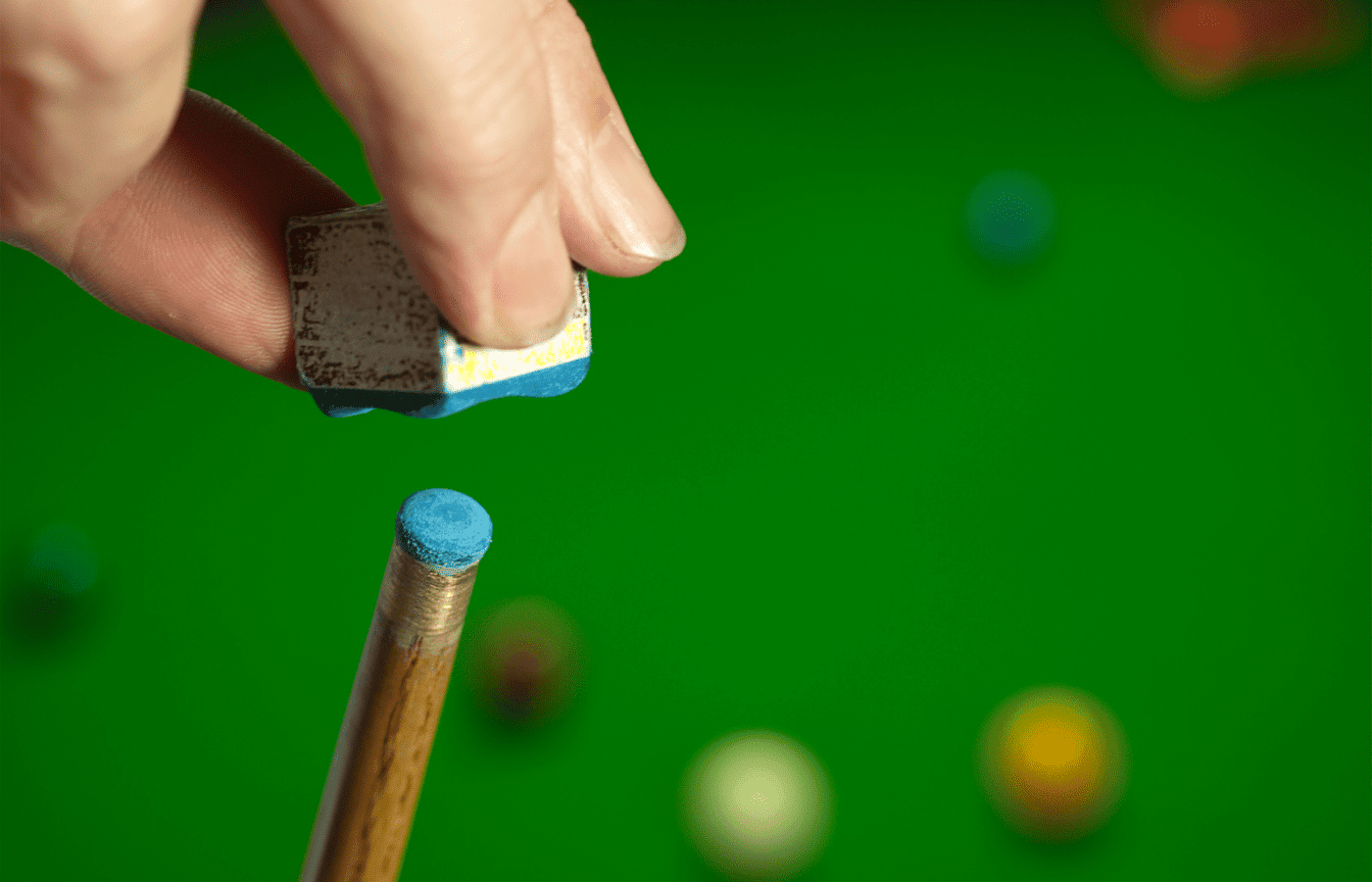 Keeping a snooker cue chalked will ensure that a snooker player is always getting off the best shot that they possibly can. A lot of professionals also say it’s out of habit.

It is also partly for grip reasons. It will ensure that a snooker player is always getting off the best shot that they possibly can. If a player has a well-chalked cue, then they only have themselves to blame if the shot goes wrong.

What Is the Purpose of Chalking a Snooker Cue?

The tip of a snooker cue is smooth. A snooker ball is smooth.

When you hit a snooker cue that doesn’t have chalk on it, you are hitting a smooth surface against a smooth surface. This will cause slippage. This means that the player striking the cue ball will have a lot less control over where it goes.

Once you add some chalk onto the top of the cue, it adds grip. The cue tip will make proper contact with the cue ball and it is going to go exactly where you want it to go.

Helps Add Spin to the Ball

It is especially important that a snooker player chalks the top of their cue if they are trying to put a spin on their shots. If they don’t, then there will be no spin, and the shot will end up being rather awful.

That being said, chalk doesn’t really wear off from the cue tip all that quickly. This won’t stop a lot of professional players from chalking their cue before every shot, though.

Allows the Player Time to Focus

It provides them with a bit of time to focus and really contemplate the next shot that they make. They know that they do not need to chalk the top of their cue all that often, but they do because they do it every shot anyway.

If you can think back a few years ago, then you will know that Ronnie O’Sullivan hit the maximum break in a record amount of time (a little over five minutes). If he hadn’t chalked his cue before every single shot, he wouldn’t have come close to hitting that amount of time.

In fact, he barely chalked his cue over all of the shots that he was making. He actually took quite a bit of a risk when he played like that! Although, it does go to show the amount of control he has over his ball.

How Often Should You Chalk Your Cue?

We recommend using only high quality chalk like this one by Blue Diamond, found on Amazon. However, there are more expensive and luxurious chalks out there, but Blue Diamond is highly respected among many top professionals and is offered at an awesome price.

You have to remember that chalk is very abrasive. The more you chalk your cue tip, the quicker you will be wearing it down. However, we would never recommend that you skimp on the chalking because you want your cue tip to last as long as possible. They don’t actually cost that much to replace.

If you look at the tip of the cue and you do not see an even layer of chalk, then it is probably time to add a bit of chalk to it. There shouldn’t be any of that cue tip poking through. All you should be able to see is the blue chalk.

If the shot you are planning to take involves a little bit of spin, then it is vital that you chalk your cue tip before you take that shot. We promise you, if you do not chalk your cue, then you will not be able to take the shot properly. Something like this could easily end up costing you the frame!

How Do You Chalk a Snooker Cue Properly?

A lot of people chalk their cue incorrectly. These people struggle to get an even coat on their snooker cue, and this means that they get absolutely no benefit from chalking the cue in the first place.

The best method is to hold your cue at a slight angle, pointing away from your body.

You will then want to be ‘brushing’ the chalk over the cue tip. Do not drill it onto the cue tip, light brushing motions is the way to go.

The idea is to ensure that you have complete chalk coverage on the pool cue tip. As we said before, you want to ensure that there is no cue tip showing through. If you have been regularly chalking your snooker cue during a game, then you probably shouldn’t have to chalk all that much.

Knocking the cue against the table will eventually cause the cue to become bent. This is going to make it even harder for you to be able to take the shots you want!

Although professional snooker players may chalk their cues a little too often, it has it’s benefits. It helps give them a little time to focus, and also helps them achieve great shots.

If you are going to be playing snooker regularly, then you really will need to learn to get into the habit of chalking your snooker cue.

It is a major component of the game and, if you do it properly, your shots will become a lot more accurate, particularly if you are trying to add some spin to them.