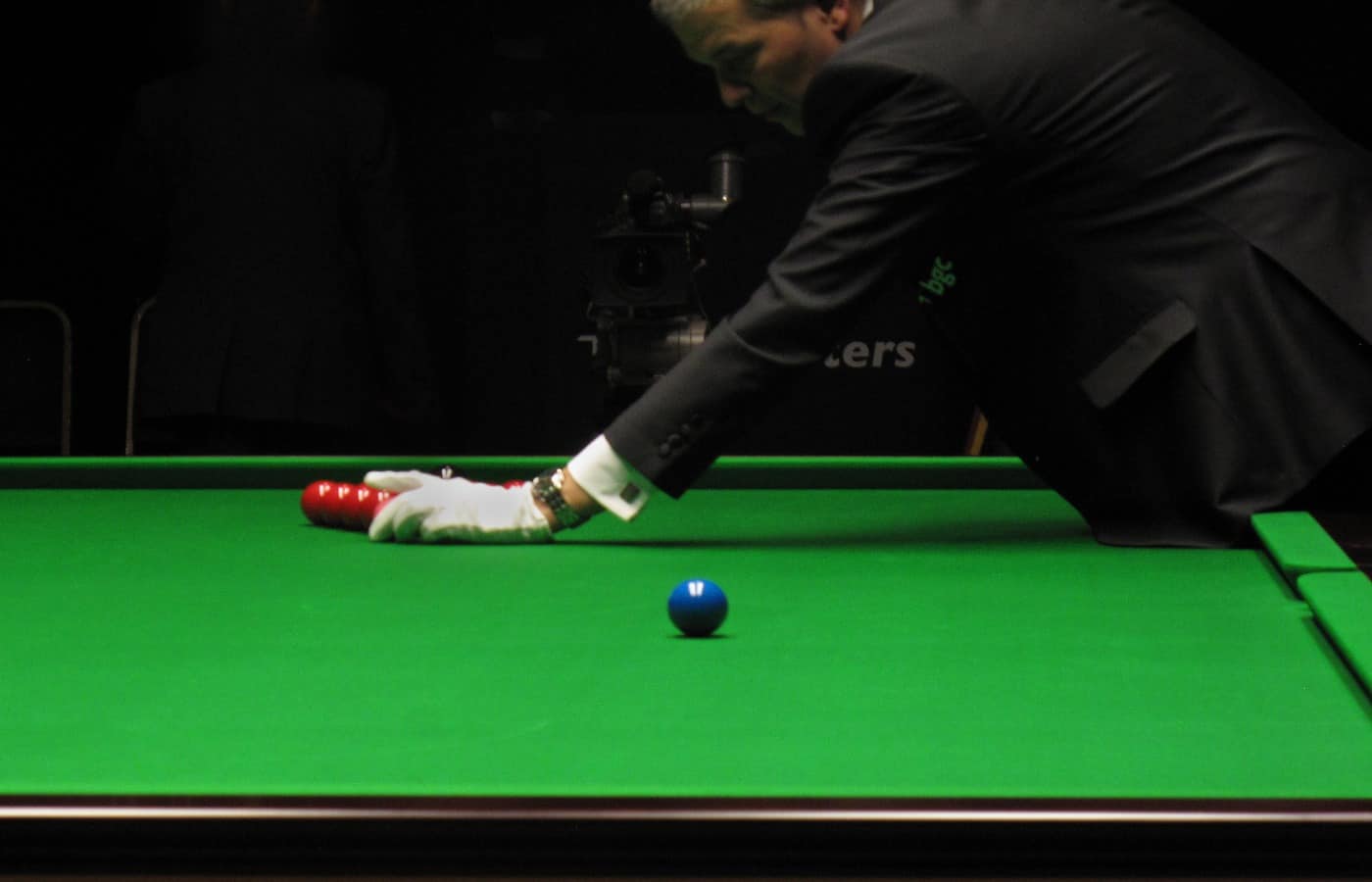 First founded in the fifteenth century, billiards became a sport of choice among royalty. This popularity of the game in the uppermost upper class led to the game resulted in the moniker “a gentleman’s game.”

Snooker has its roots in the game of billiards. As an adaptation of the game of billiards, snooker, too, became known as a game of gentlemen. This moniker is no surprise when you consider that the game was founded in an officers mess in Jabalpur by Colonel Sir Neville Francis Fitzgerald Chamberlain.

What Does Being a Gentleman Have to Do With Tapping the Table?

Being a gentleman means showing good sportsmanship while also maintaining a sense of decorum and propriety.

One of the ways that players maintain decorum during a game of billiards or snooker is to keep quiet while each player takes their shot. Much like the game of golf, this silence lets the active player concentrate on their shot without distraction.

Why the Table Tap?

Since the room is so quiet when playing a game of snooker or billiards when a player commends their opponent on making a good shot, their verbal commendation may go unheard by onlookers. So, to ensure that onlookers see their “good sportsmanship,” the complimenting player also taps the edge of the table.

In other sports, players may recognize the achievements of other players with a loud cheer, a high five, or a slap on the rear. These jubilant exhibitions, however, are very far from gentlemanly behavior and would never have a place in a snooker match.

How Important Is Good Sportsmanship in Snooker?

How important is it for a snooker player to exhibit good sportsmanship? It is important enough that the World Professional Billiards and Snooker Association World Governing Body include it in their official statement:

“The Sports of Snooker and English Billiards are to be contested with the highest standards of sportsmanship and integrity.”

The organization also makes mention of etiquette and sportsmanship in the “Official Rules of the Games of Snooker and English Billiards.” In fact, there is an entire section of the rules book dedicated to “Unsporting Conduct”, “Conceding”, “Time Wasting”, and “Penalty.”

The Penalty for Unsportsmanlike Conduct in Snooker and Billiards

Integrity is not only important to the World Professional Billiards and Snooker Association World Governing Body; it is equally important to the players. Snooker is one of the few sports where players hold themselves to the same standards as referees of the game.

This assumption of responsibility and integrity is the perfect example of why players value etiquette and sportsmanship in the way that they do. It is equally important to those players that their audience notices their compliance with these standards hence the table tapping. A quietly spoken word may go unheard, but a physical gesture is harder to miss.

A failure to tap the table in recognition of a good play is not necessarily seen as unsportsmanlike. Tapping is more of a “courtesy” to let others know that a good play did not go unnoticed.

Showing great sportsmanship in snooker has been a part of the game since it started. Tapping the table after your opponent makes a good shot is a great way to show your sportsmanship.

Good sportsmanship in snooker and billiards is very important. It’s so important that it’s in their rulebook, and you can even be penalized for unsportsmanlike conduct.

Although you are not required to tap the table when your opponent makes a good shot, it’s a great way to show that you aren’t a poor sport and makes you look like a professional whether you win or lose.