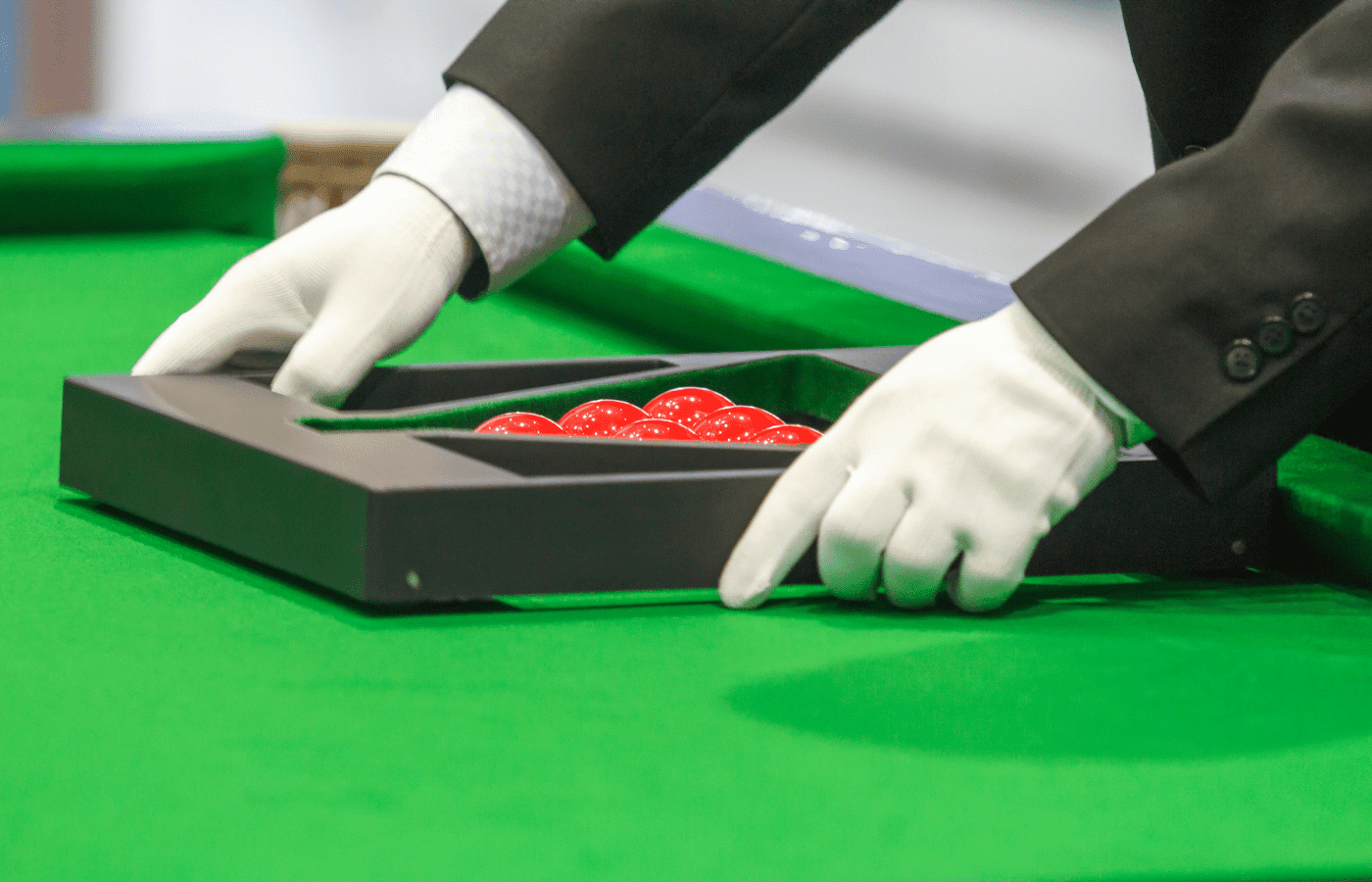 A snooker referee will be handling snooker balls several times throughout the game. They will be forever picking them up out of the pockets. They may also have to move the cue ball on occasion.

If a snooker referee handled the balls with their bare hands, then they would transfer dirt and grime onto the balls. It may not be a lot, but it will have an impact on the way that the ball moves.

The Purpose of Wearing Gloves

For example, let’s say some sweat or grease managed to get on a snooker ball. A small amount can change the speed at which the ball moves, or even the angle that it moves at. This is going to make a snooker player’s shots a little bit more difficult.

Every so often, balls on the table will also need cleaning off. The gloves will come in handy for this. They allow the referees to polish up the balls nice and quickly. This helps to ensure that snooker remains a game of skill rather than a game of trying to predict how much dirt and grime is on a ball.

To be honest, the colour of the gloves doesn’t matter all that much. In theory, referee gloves could be any color. However, a referee’s uniform has grown up with professional snooker, and it is fairly standard for them to wear white gloves nowadays. Although, that is on the World Snooker Tour. In other tournament settings, you may find that snooker referees have different color gloves.

It is likely that referees on the professional circuit wear white gloves due to the way in which the sport grew up. As you may well know, snooker is a game that has its birth in parlor games. It was essentially a sport for rich people and it often featured at major social gatherings.

Obviously, during these events, people would often be wearing black tie attire i.e. they looked very, very smart! White and black are common colours for events like this. Therefore, wearing white gloves would have fit into this. As the sport went professional, the outfit was kept.

The white gloves probably work in the snooker referee’s favour anyway. The white colour means that any dirt or chalk will easily show up on the gloves. This means that they can remove them right away without worrying about getting any dirt onto the balls!

The same happened with snooker players. This is why you find many of them still wearing bowties and waist coats. It is a hallmark of where the sport originally developed from.

Snooker referees will only wear cotton gloves. These are often a ‘one size fits all’ glove.

You will actually be surprised at how high quality these gloves are. By all accounts, they are exactly the same gloves that historians wear when they are reading ancient documents.

The reason why they wear cotton gloves is because cotton is a very breathable fabric. This helps to prevent the snooker referee’s hands from sweating too much which can, of course, have an impact on the balls.

Cotton gloves are also brilliant at keeping dirt, dust, and grime at bay. This means that when a snooker referee touches the balls with their hands, it is unlikely that they are going to be transferring anything to the ball.

Do Referees Change Their Gloves Throughout the Game?

As we said before, the purpose of the gloves is to ensure that the referee is not transferring any dirt to the snooker balls. Therefore, if dirt appears on the gloves, then the referee will have to change them.

In professional games, it is likely that the referee will change their gloves between frames. This will help to ensure that the gloves remain in pristine condition.

It is unlikely that they will change them during a frame. This is because the game will have to pause. After all, the referee would have to wash their hands before touching a new pair of gloves to minimise the risk of contamination.

Professional players should never wear gloves during a game of pool. This is because a snooker player should never ever be touching any of the balls on the table with their hands. If they do, then the frame could be awarded to their opponent.

In an amateur setting where you do not have a referee, you still probably wouldn’t want to be wearing gloves.

Obviously, if you are in an amateur setting, it is likely that you are going to be touching the balls fairly frequently. However, if you wear gloves, then you are pretty much going to be hampering how you hold the cue. This could make your shots a lot worse.

If you are playing snooker at an amateur level, then try to avoid touching the balls as much as you can. Every so often, you may want to wipe the balls off with a cloth. THis will help to keep them nice and clean.

At the end of any snooker game, make sure that you clean the balls off. If you are playing snooker at a professional snooker hall, then they will probably do it for you. However, it is still common courtesy to at least try and clean them off a little bit.

Snooker referees wear gloves to avoid transferring dirt and grime to the balls as well as to look professional during a game.

The white gloves are more down to the fact that it is part of the snooker uniform on the professional circuit as opposed to anything else.

This is just an outfit that evolved as the sport grew, and there is no special reason beyond this except ensuring that referees look as professional as possible.