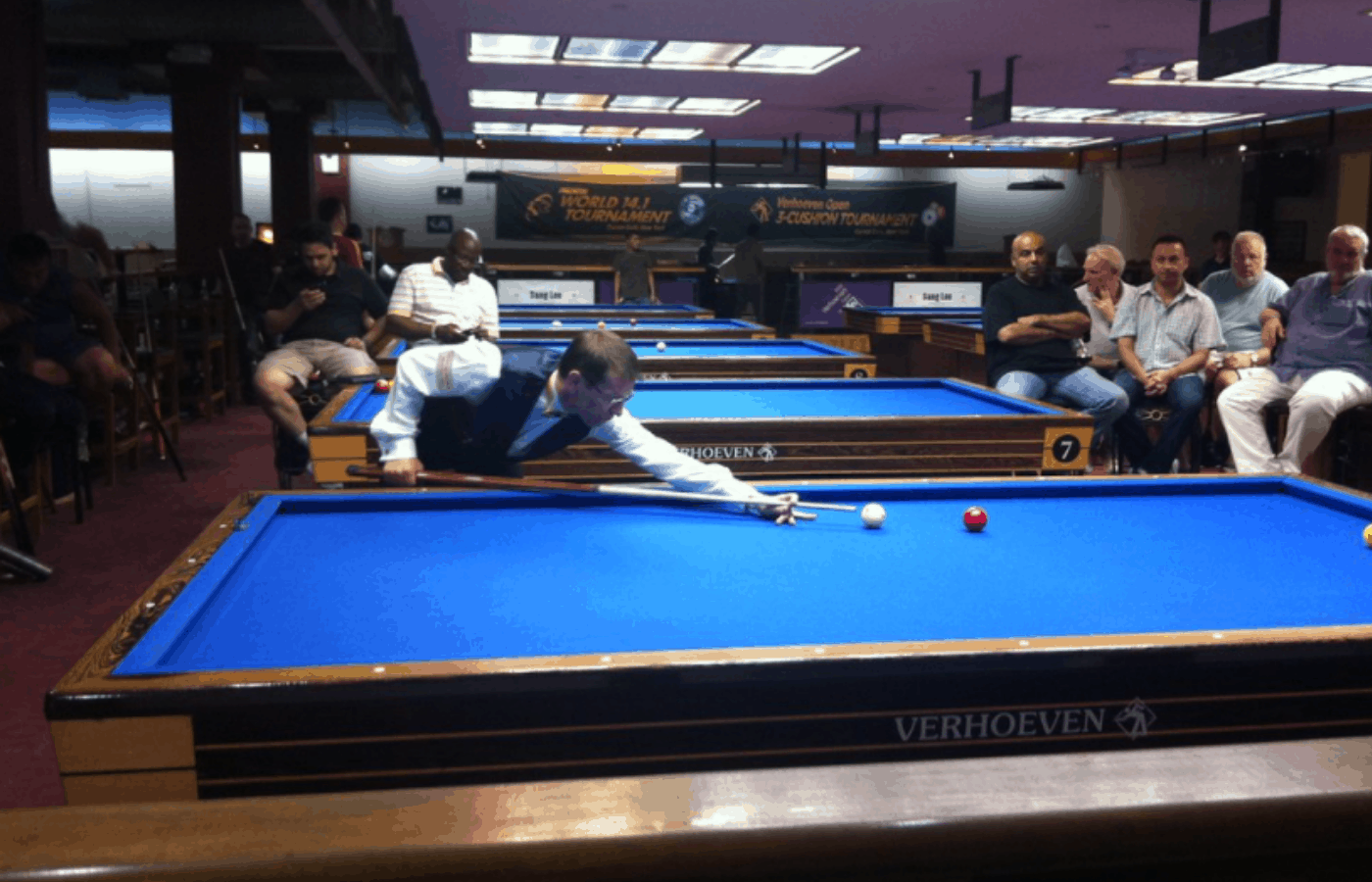 Some pool tables do not have pockets because they are used for a different type of cue sport called carom billiards. During a carom billiards game, players maintain three object balls on the table at all times and use different strategies to score points. This category includes games such as straight rail, balkline, one-cushion, three-cushion and artistic billiards.

If you’ve ever seen a pool table without pockets you’ve probably wondered about its purpose. It may seem like someone has made a mistake, or overlooked a key feature of the table’s design, but in reality pocketless tables are built for a specific purpose.

Keep reading to find out how billiards can be played on a table without pockets, how the rules differ from regular pool and how you can participate.

What Is Carom Billiards?

Carom billiards, sometimes called carambole billiards, originated in France during the 18th century. It’s a type of cue sport that is played exclusively on billiard tables without pockets. At the height of its popularity, national tournaments were hosted throughout the world. Today, despite its decline in active players, carom billiards is still a recognized category of cue sports.

The games included in this class of cue sport require use of a cue stick, three billiard balls and a pocketless table. Each billiard ball has a very specific purpose, and has a different meaning depending on the game being played. Carom billiard tables may also feature lines and shapes in order to mark out zones with different point values.

You may only be familiar pool, in which the purpose of the game is to clear the table of object balls. So how is a game of carom billiards won without the option to “sink” balls in pockets?

The goal of carom billiards is not to reduce the number of object balls on the table, but to ricochet the balls against specific objects to gain a set number of points. The first player to reach that predetermined number is the winner.

There are several games housed within this category including straight rail, balkline, one-cushion, three-cushion, and artistic billiards. Continue reading to get more information about these games and how you can play.

This is the most simplified version of carom billiards and is a great place for beginners to start playing on tables without pockets. Once you understand the basics, you can move onto more complicated iterations of carom billiards.

This game is considered a variant of straight rail. By creating additional rules and regulations, balkline is a much more complex game and requires more strategy of its players.

Balkline tables are segmented into nine distinct rectangles. Each of these sections have a predetermined point value that players can earn by having an object ball occupy its space. The longer the ball remains within the borders of that space, the more points are awarded.

Interestingly, Balkline games are grouped into different divisions based on the measurements of its table zones. A millimeter difference between line placements can completely change the way the game is structured.

During the early 20th century, Balkline was one of the most popular cue sports played in the United States but was soon overtaken by eight-ball pool – the well-known pocket game played today. It’s much rarer to find one of these tables in a local pool hall and may need to be custom ordered.

Named after the game’s most important regulation, one-cushion carom is played by hitting two object balls and at least one rail cushion in one cue. This game is primarily based in Europe and doesn’t see as much interest in other areas of the world.

This game is very similar to one-cushion carom but requires players to hit additional cushion rails in order to succeed. A winning move will initially make contact with one object ball, at least three separate cushions and finally hit the second object ball at the end.

If this sounds complicated, that’s because it is! This game is very difficult and received criticism from disgruntled pool players throughout the late 19th century.

Despite the complaints, this game is the most popular carom style cue sport played in the United States today. The Union Mondiale de Billard, an organization that oversees three-cushion billiards, continues to host championships after more than 100 years in operation.

In these games, players are tasked to aim cue balls in a way that produces specific ricochet outcomes. Aptly named, artistic billiards takes a lot of ingenuity in order to understand how to make the balls follow a desired path.

There are 76 predetermined shots that players are required to recreate in order to earn points. Some outcomes are much more challenging than others, so three attempts are provided for each turn. The maximum score a player can reach is 500 points, but the highest recorded value remains at 427.

Artistic billiards are a relatively new invention compared to other cue sports. Regulated competitions began in the 1980’s and are continuing to see more interest in recent years. A majority of its players are based in western Europe.

Now that you’ve learned about different types of carom billiards games, you might be interested in playing a game yourself. There are a few different ways you can get involved.

If you have a local pool hall in your area, you might be surprised to find that you already have access to a pocketless pool table in your own neighborhood. This is a great place to meet other players and start practicing your technique.

Another option to consider is trying online games that simulate a pool table without pockets and allow you to get familiar with the rules. This is great if you live in an area with less access to billiard tables because you can play from anywhere!

Before you start playing on a table without pockets, you can also observe experts play live and learn from their experience. Carom Café Billiards is a pool hall based in Flushing, New York that hosts daily livestreams on its website.

This will allow you to see how players position themselves to achieve top scores. If you’re a visual learner this is perfect for you!

Although they’ve seen varying degrees of popularity since their invention, some carom billiards games are still considered a “major world cue sport.” This contributes to why you will continue to see pool tables without pockets today.

It may be rarer in the United States, but across Europe, Asia and Latin America carom billiards are a common pastime.

Next time you come across a pool table without pockets, try your hand at a friendly game of carom billiards and practice the knowledge you’ve learned in this article. Maybe you’ll even have some fun!