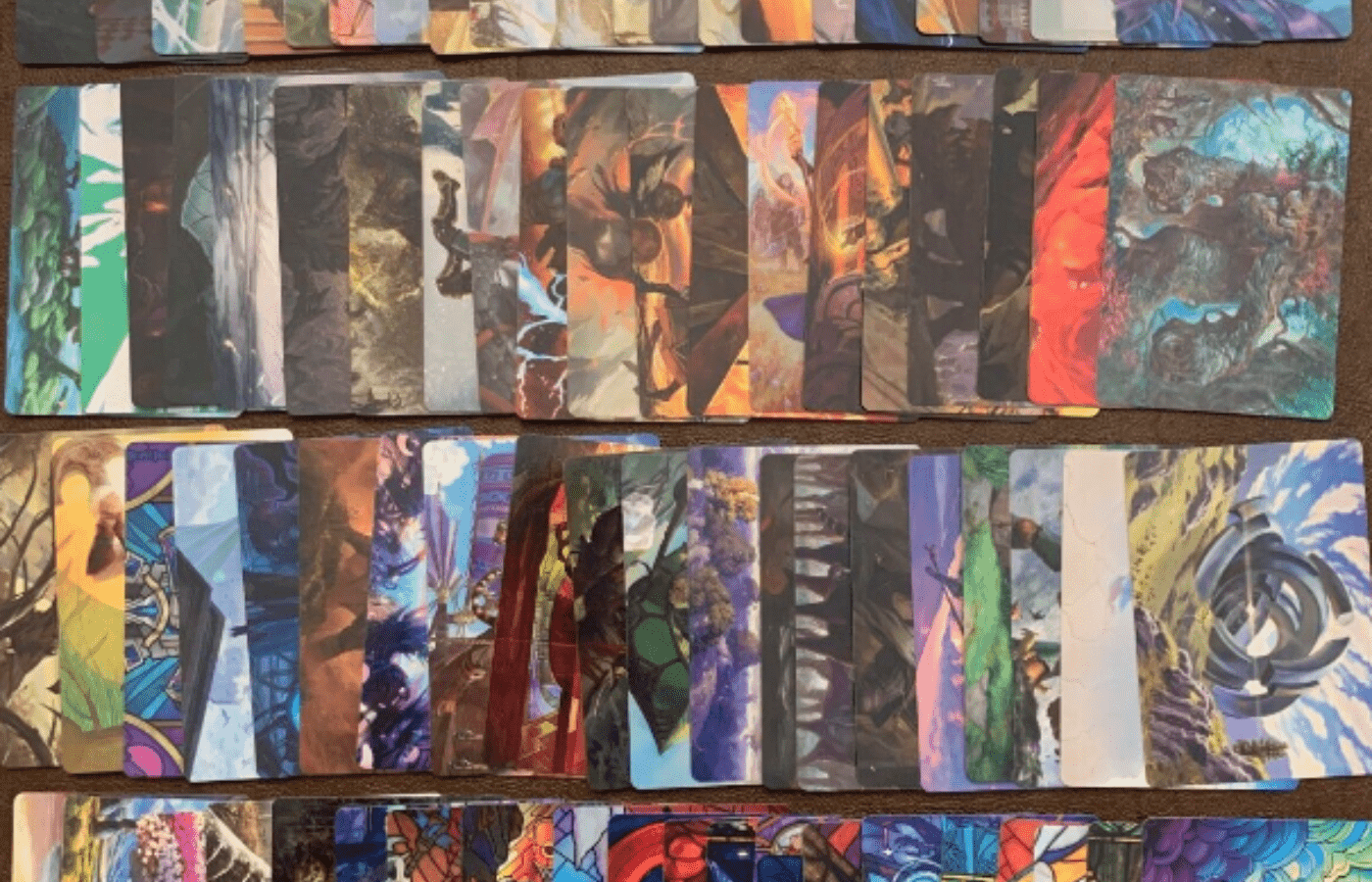 Magic the Gathering has some pretty amazing cards available. Every so often, you may stumble across MTG art cards. So, are MTG art cards worth anything?

MTG art cards are not worth anything. MTG cards rarely hold their value. The only time a card is worth anything is if it is used in play. It doesn’t matter what format. An art card could look absolutely stunning, but if it doesn’t get played, nobody is going to want it.

Of course, we know this may not answer all of your questions about MTG art cards, so shall we go into a bit more depth?

What Are MTG Art Cards?

The idea of an MTG art card seems to vary between people.

What MTG defines as an art card is a collectible card that can be found in some MTG boosters. It is not designed to be played with. Instead, it is just a stunning piece of artwork meant to show off the talents of MTG artists.

Other people may see ‘extended art’ cards as art cards as MTG art cards. However, do bear in mind that extended art cards are cards that have been painted by collectors. They are not official card art.

Are MTG Art Cards Worth Anything?

Not really. While there are probably some MTG art cards that are worth a small amount of cash, they are distributed with such frequency that the price doesn’t seem to hold all that well. It is not uncommon for full sets of MTG art cards to be selling for under $10 at the conclusion of an expansion set.

You have to remember that most people that play MTG do not do so with the intention of collecting cards. They are looking for the best cards possible. They don’t need every card in the set.

This means that the cards which cannot be played in any format tend not to hold their value that well. In fact, most people avoid them. It is great if you are collecting the cards, but not so much if you aren’t selling them.

Does MTG Have Full Art Cards?

There are also full art lands that have been included in some sets. These are a bit rarer than the tokens, and there does seem to be a bit of demand for them, although that demand seems to have died off recently.

The only other MTG full art cards available have been given away as competition prizes over the years. These cards have been given for participation in various events related to MTG (including the Game Days), as well as placing highly in tournaments. These cards are just full art versions of their booster pack counterparts.

What Do You Do With Art Cards MTG?

There isn’t a whole lot that you can do with them.

If you have pulled them from a booster pack, then you can collect the set, but there is not much sense in holding onto the additional cards that you get. You may as well toss them away, because they are quite common.

If you have pulled a full art land or a full art token, then keep them. These cards do tend to have a little bit of value to them. You aren’t going to be making a huge amount of cash, but there are a lot of people out there that will take them off your hands.

If you have won a full art card in a competition, then you can use it in your game. Alternatively, you can sell it on. Depending on how rare the card is, some people may be willing to pay for it. You probably won’t make much on it, though.

What Are Extended Art Magic Cards?

In recent years, a community has grown up that deal in Magic: The Gathering card alters. Essentially, they are modifying the artwork on the cards that they play with. In most cases, this means the extension of the borders on the card (hence why they are called extended art cards).

These cards are legal to play with as long as the following conditions are met:

If you start getting into the extended art Magic community, you will see some pretty awesome designs out there.

What Are The Most Valuable Art Cards in MTG?

Most of the art cards in MTG are not worth all that much.

The only ones that seem to be worth money are either the full art tokens or the full art lands. If you sell these ones, you may be able to make a couple of dollars more than if you were selling the standard card.

Some of the competition cards may be worth a bit of money, but a lot were distributed and unless the card still receives play, chances are you won’t get much money for it.

Magic: The Gathering art cards are not worth much. They are just a way for Wizards of the Coast to showcase the talents of their artists.

You may find that you can get some cash if you have a full art token or a full art land, but you probably won’t get much money for them.

Really, MTG art cards are a fun collector’s piece and nothing more. If you collect the cards, you will love them. If you play the game, most will be useless to you.