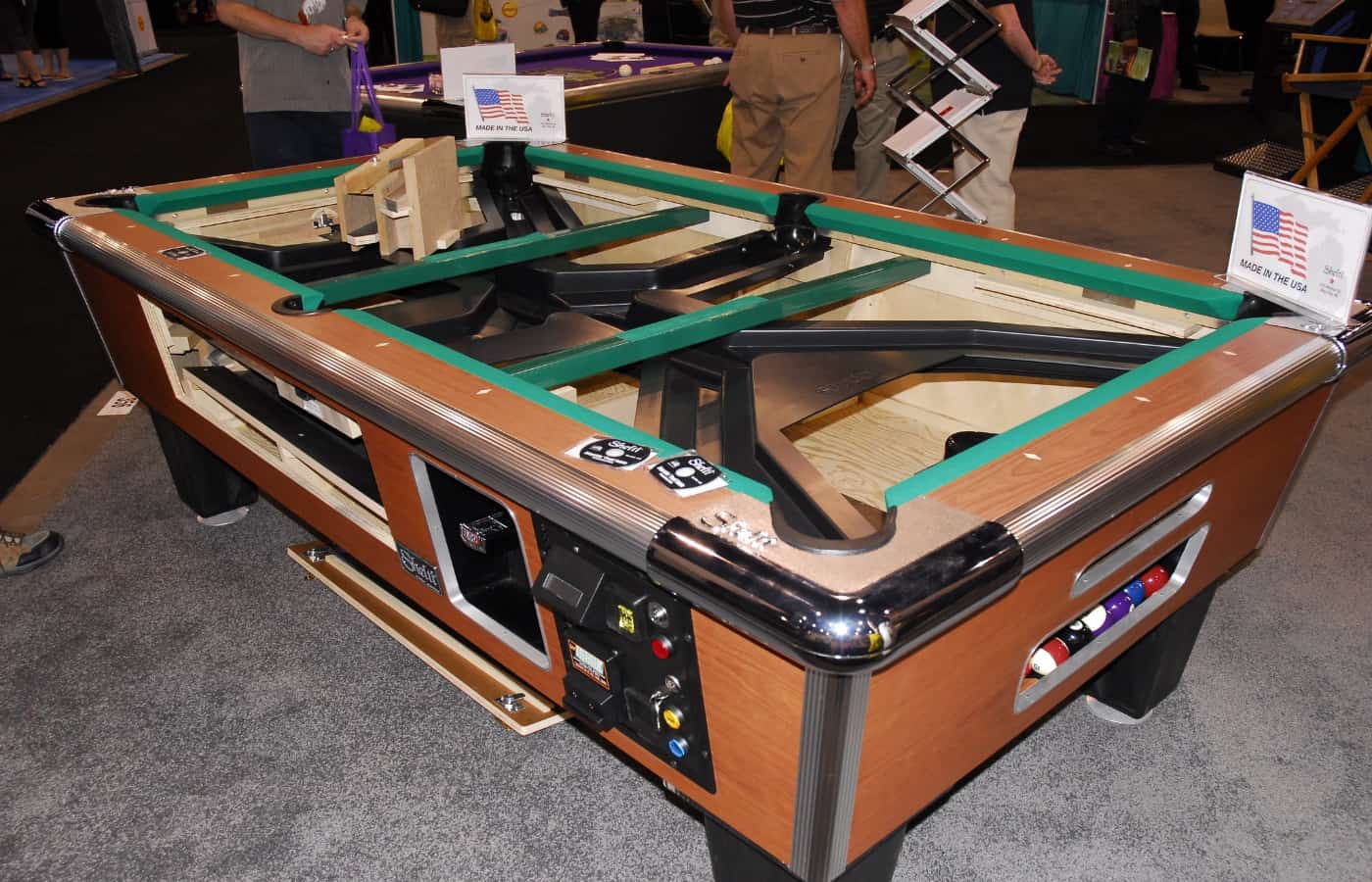 If you grew up believing that pool tables were capable of sorcery, you’re not alone. When a player sinks one of the colorful pool balls they can’t get it back for the rest of the game. However, if they accidentally sink the white cue ball the table somehow knows and sends it right back.

How does a pool table know the white ball (cue ball)? Any theories you had about magical tables can be put to rest. The pool table is actually able to recognize the white cue ball, so they don’t get sent to the storage area with the rest of the pool balls.

There are two different ways that the pool table can recognize the cue ball, each depends on which type of cue ball you are playing with. The cue ball is either a different size than the other balls or is magnetic.

How The Pool Table Recognizes The White Ball

There are two main methods that are used to make a pool table recognize the pool ball. The size of the cue ball, and magnets.

When you sink a pool ball, the table sends it down to the storage area to wait until the next game. One way that the pool table is able to recognize the cue ball is by the size. A regular pool ball is 2.25 inches, so often they will add an additional 1/8 inch to the cue balls.

A larger ball won’t be able to fit through the return chute. Instead, the table will send it to the closest accessible slot. The return chute of the pool table won’t accept anything that’s even a sliver larger than 2.25 inches.

They have also made smaller cue balls, but many pool players didn’t like these. They were too light and would bounce back after they hit a ball. Since the pool balls were heavier than the cue ball, they were more difficult to sink.

In 1966 they decided to try out a new way for billiard tables to recognize a white ball. This was done with a magnet. There is a sensor in the table that will reroute the white ball with a magnet in it back to the players so they can continue the game.

Many of these balls are either dotted or covered in metal. This allows the ball to be pulled into position. There have been several different styles of cues balls designed throughout the decades with this method being applied.

This magnetic cue ball by Aramith is a top pick on Amazon. It It is used in most coin-operated billiards tables. Aramith has built a name for themselves for having some of the highest quality and longest lasting billiard balls in the sport.

How Does the Inside of a Pool Table Work?

In todays modern coin-operated pool tables, magnetic cue balls are the balls of choice. The size of the cue ball is 2.25 inches, which is the exact same as the rest of the numbered balls. The cue balls either have metal inside of them, or are coated with a metal skin which is how Aramith produces their magnetic cue balls.

A strong magnet attaches to the cue ball in the separation area and pulls it toward a track that leads to the head of the pool table where the player will then receive the ball.

The bigger, or weighted cue balls, are used in older model coin-operated pool tables. These tables actually have more than one method when distinguishing the cue ball from the rest of the balls. They have oversized balls, as well as heavier balls depending on the pool tables design. The heavier cue balls roll through a track that activates a rocker and drops the cue ball onto the right track that leads to the head of the table.

Which Method Is Better?

If you are just going out for a night and enjoying a friendly game of pool, then it doesn’t matter which type of white ball you choose to play with. Both are suitable and shouldn’t cause any problems that would affect your game. Unless you have someone in the group that is a real stickler for how they play pool, you likely won’t notice a difference.

Some will say that the balls with magnets are better. They often feel this way because they don’t like the feeling of playing with a ball that is off on size. The slightly bigger ball could be affecting how they play the game and they simply aren’t as comfortable playing with it.

Yet, others are turned off by the magnetized ball. They loathe the doctored balls with metal on the outside and refer to them as mudballs. These balls are uneven and often roll along the table unintentionally. They prefer to play pool with the standard, unaltered, cue ball.

So, you may be disappointed to find out that pool tables aren’t magic after all. The cue balls have been designed differently than the rest of the billiard balls, which is how the pool table can tell the difference. Since the table is able to recognize the cue ball, players don’t have to worry about them getting sent to the storage compartment.

Coin-operated pool tables are made to distinguish the cue ball by its size, or by having a magnetic cue ball. To professional players, both methods are controversial due to the cue balls not being the exact same as the other balls. Some can see this as an unfair advantage or disadvantage depending on the player.

Next time you accidentally sink your cue ball it won’t be a mystery on how it got back to you.