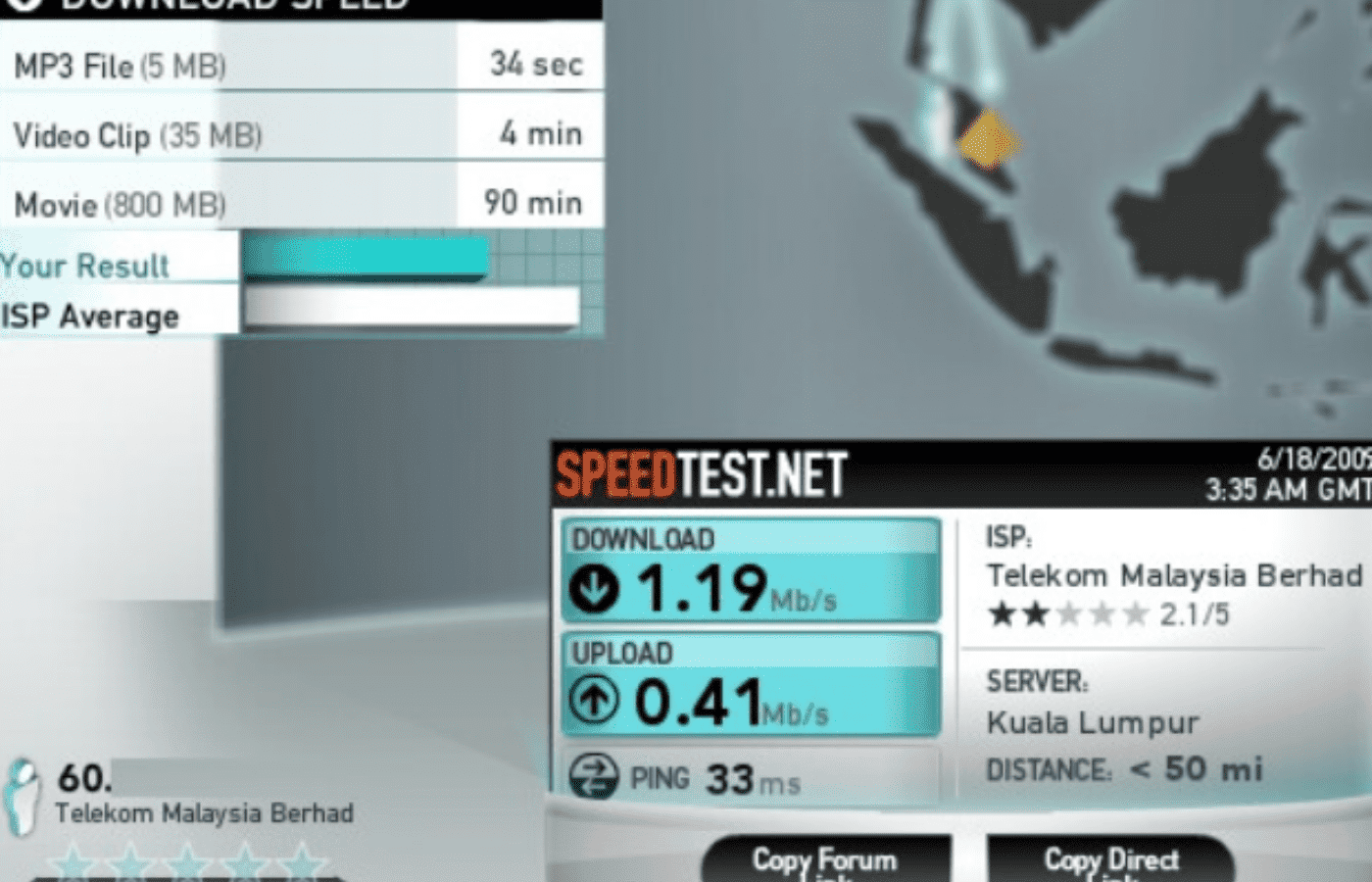 With a speed of 512kbps, you will only be able to download at most about at 62.5 KB/sec. This internet speed is considered to be very slow, especially if you will be using your internet to do more than just basic web browsing.

To compare this internet speed with real world usage, the popular streaming service Netflix requires at least 1.5 mbps of internet speed to stream their shows. This is also for just the basic quality streams as well, if you are planning on watching in HD or Ultra HD, the needs for your internet speed will greatly heighten.

The following is a small table showing some common file sizes and the time it would take to download these files if your internet speed was 512kbps.

With a speed of 512 kbps, you should be able to do basic web browsing and email opening without much issue. Just don’t expect to download or upload large file sizes in a timely manner.

We only recommend this internet speed if there is nothing else offered in your area. If there are faster speeds available, avoid this internet package at all costs.

Is 512 Kbps Fast Enough for Netflix?

Streaming video is definitely going to be a difficult task with such a slow internet speed. Even on Netflix, they recommend a minimum download speed of 1.5 mbps. This is the bare minimum required to even have the service start up.

Although 512 kbps does not meet the minimum internet speed requirements for Netflix, you can still try to stream the lowest possible stream. Streaming with a slow speed will most likely result in long loading times, as well as constant buffering and poor quality.

Youtube is a little different from a streaming service like Netflix. With Youtube, you can click on a video and just wait for it to fully load before playing, even with a slow speed. You might not be able to stream the video perfectly upon opening, but after waiting a few minutes you should be okay.

According to Youtube’s internet speed requirements, standard definition requires a speed of at least 1.1 mbps to stream effectively.

Is 512 Kbps Fast Enough to Work From Home?

512 kbps is just too slow to use if you will be needing to send and receive large files. This is especially true if your job requires the use of Zoom voice and video calls.

Zoom is the primary reason that you will want to have a fast internet connection. It is used at just about every company that has workers at home.

As you can see from their requirements, this does not even meet their most basic qualities, which means you can encounter issues while using their service. Issues like dropped calls, and buffering will be the majority of encountered problems during 1 on 1 and video calls.

Is 512 Kbps Enough for Gaming?

Currently, to play online video games at a somewhat decent experience, it is recommended that your internet service has a minimum download speed of 3 mbps and a minimum upload speed of 1 mbps. 512 kbps does not meet this minimum requirement.

With such a slow internet speed you can definitely expect ping/latency to be well over 100 ms. This will make the gaming experience very laggy and choppy at best and is definitely not recommended.

Not only will such a slow download speed affect your ping, but downloading video games and updates will take ages to finish, especially since many of the files get into the gigabyte range.

Is 512 Kbps Fast Enough for a Family?

512 kbps is barely fast enough for one person to browse the basic web, so it will definitely not be good enough to be shared in a household. It should be able to support multiple users using the internet for very basic tasks such as opening emails and going to low data websites, but don’t expect anything more.

512kbps is only able to download at most about at 62.5 KB/sec. There was once a time in history, decades ago when this was considered to be fast. In today’s technologic era, this internet speed is obsolete and is considered to be extremely slow.

We recommend purchasing an internet speed of at least 25 mbps which is what is considered to be high speed broadband. It offers the best bang for your buck in terms of cost to functionality.