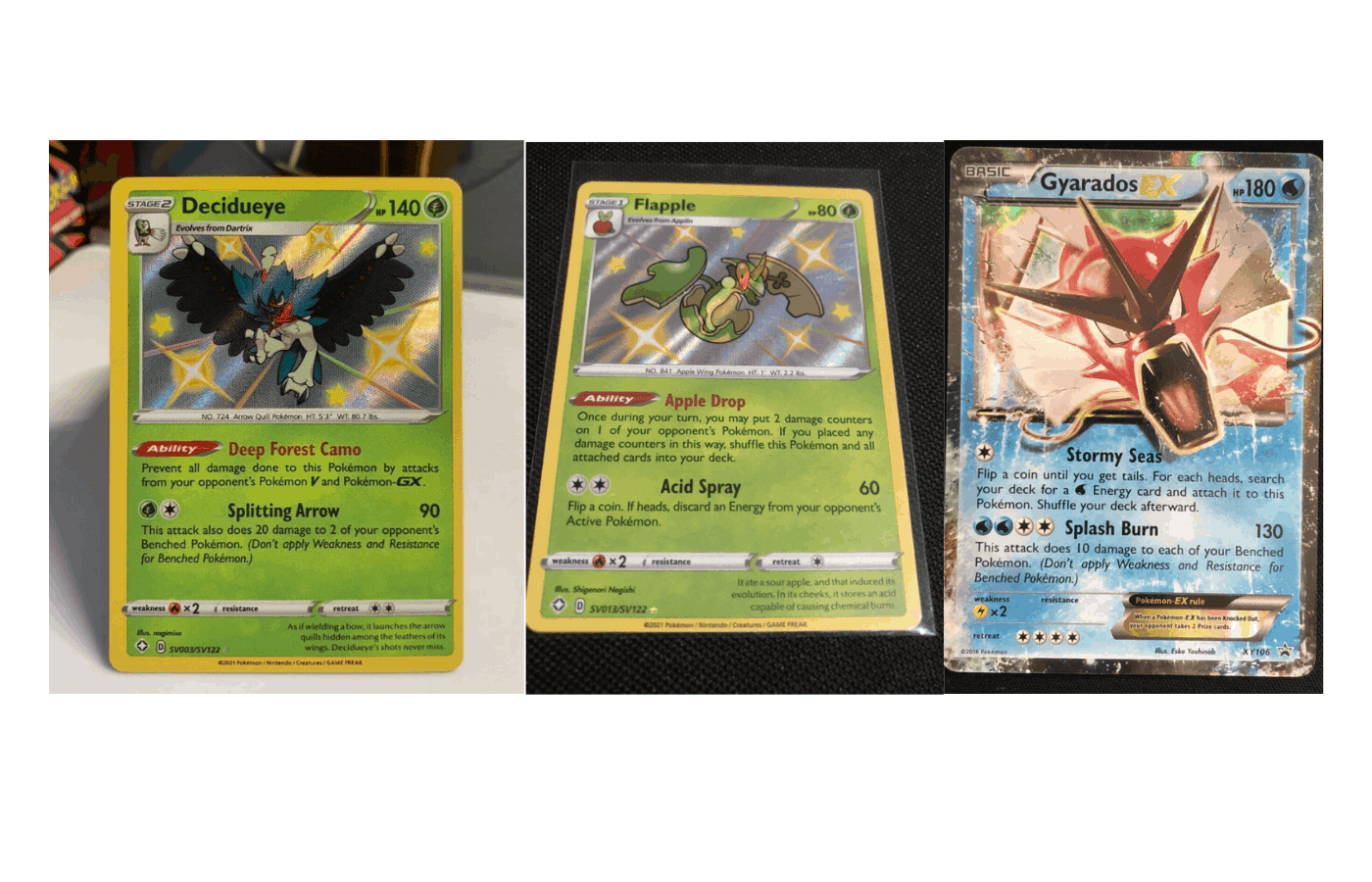 So, how do you get shiny Pokemon cards? You can get shiny Pokemon cards from booster packs. However, the chances of pulling them from a booster pack is approximately one in three hundred. The rarity means that if you try to buy them from a reseller, then you will be spending a whopping amount of cash on one too. It is not uncommon for prices to start at several hundred dollars and go up from there.

Since we know that there are some people that aren’t quite sure what a shiny Pokemon card is or how to tell that they have one, we want to expand on things a little bit. We are hoping that, by the end of this page, you will have a solid idea about what Pokemon shiny cards are, plus understand a little bit about how rare they are.

What is a Pokemon Shiny Card?

If you have ever played a Pokemon game, including Pokemon Go, then you will know that shiny Pokemon are Pokemon that are a slightly different color to normal. The same concept applies when it comes to Pokemon shiny cards. The Pokemon is a different color to what you would normally expect.

Shiny Pokemon are numbered cards. Some of them are part of the standard set, while others are secret rares. Of course, the secret rare shiny cards are among the hardest to find.

Shiny Pokemon have been included in most Pokemon sets since Neo Revelation.

If you are planning on making a deck with Shiny Pokemon, then it is interesting to note that you can include a maximum of one version of that Shiny in your deck. Luckily, none of these cards are especially powerful, which means that you probably won’t be building a deck around them anyway.

What Are the Chances of Getting a Shiny Pokemon Card?

This means that to come close to guaranteeing a Pokemon shiny card, you would have to spend over $1,000 on booster boxes and, even then, you still have no guarantee that you are going to be pulling a shiny.

How Do You Get a Shiny Pokemon Card?

As we said, booster boxes for some sets are going to include them. However, if you are looking to collect shiny Pokemon cards, then pulling them from boosters probably isn’t going to work out all that well for you. You would have to be opening hundreds and hundreds of booster packs. It just isn’t viable.

If there is a specific shiny Pokemon card that you are after, then your best bet is to buy them directly from a reseller. However, the rarity of the cards means that you are probably going to be paying a hefty fee for this. Even the least-desired of the shiny Pokemon could easily go for hundreds of dollars.

How Do You Tell If a Pokemon Card Is Shiny?

If you play the Pokemon video games, then you will know that a Pokemon is shiny because it has sparkles around it. Sadly, that does not happen in the Pokemon TCG.

The only way to know whether a Pokemon card is shiny is to either have a solid knowledge of the various Pokemon cards in a set. The second way is to have a knowledge of the colors of Pokemon. If the Pokemon is a different color to what it normally is, then you know that it is going to be a shiny card.

There will be no shortage of information online about shiny Pokemon cards. So, if you think that the card you own is a shiny, then feel free to tap into the vast databases of knowledge!

Yes. Since they are expensive cards, fake shiny cards do exist. If you are buying a shiny Pokemon card from a reseller, then you should probably ensure that you only buy Pokemon cards that have been PSA graded. You must also be able to verify that PSA grade. If you can’t do that, then there is no guarantee that you are picking up a shiny card.

Yes. Shiny Pokemon cards are among the most valuable cards that you can draw. It is not uncommon for them to be between hundreds of dollars and thousands of dollars on the resale market. This is why it is so important that you understand exactly how to spot a shiny card in your booster packs.

If you have a shiny Pokemon card that you love, then we suggest that you sleeve it up as soon as you can. It won’t be long before those micro scratches start to appear on the card if you don’t. In fact, chances are that the shiny card may also have some small scratches on it simply because it was placed in the booster pack.

What Should You Do If You Pull a Shiny Pokemon Card?

Sleeve it up as soon as you can. These cards can easily be worth hundreds, if not thousands, of dollars. Do not include it in any of your decks. Instead, you are going to want to be getting in touch with PSA as soon as possible in order to find out how you can get your card graded.

It is vital that you get the card graded as this will help to preserve the resale value. It will also help to ensure that the card is kept in prime condition.

This green Espeon is up there with the rarest cards in the Pokemon game. This is because it was never handed out in boosters. As a result, only a limited number of players got their hands on one. It is uncommon to find this card priced below $8,000, even in slightly poor condition.

This is a black Charizard. It is a bit cheaper than the Espeon and the Umbreon. in fact, it is pretty cheap for a rarer Charizard. While the best condition versions of this card sell for several thousand dollars, they can start at just a few hundred dollars.

This black Charizard can sell for as high as $7,000. The price on it only seems to be climbing too. Just like the previous Charizard, the poorer quality versions can start at a few hundred dollars.

The Shining Charizard from Neo Destiny may look like a rather basic Pokemon card, but it can easily sell for $10,000 in good condition!

Shiny Pokemon cards are the rarest of Pokemon cards in the game. They are so rare that you could easily open several hundred booster packs and you will still have no guarantee of being able to see a shiny card.

If you are looking to get your hands on your own shiny cards, then pretty much the only real option you have available to you, short of opening dozens of booster boxes, is to buy the card directly from a reseller. Do bear in mind that this is not going to be cheap, though.