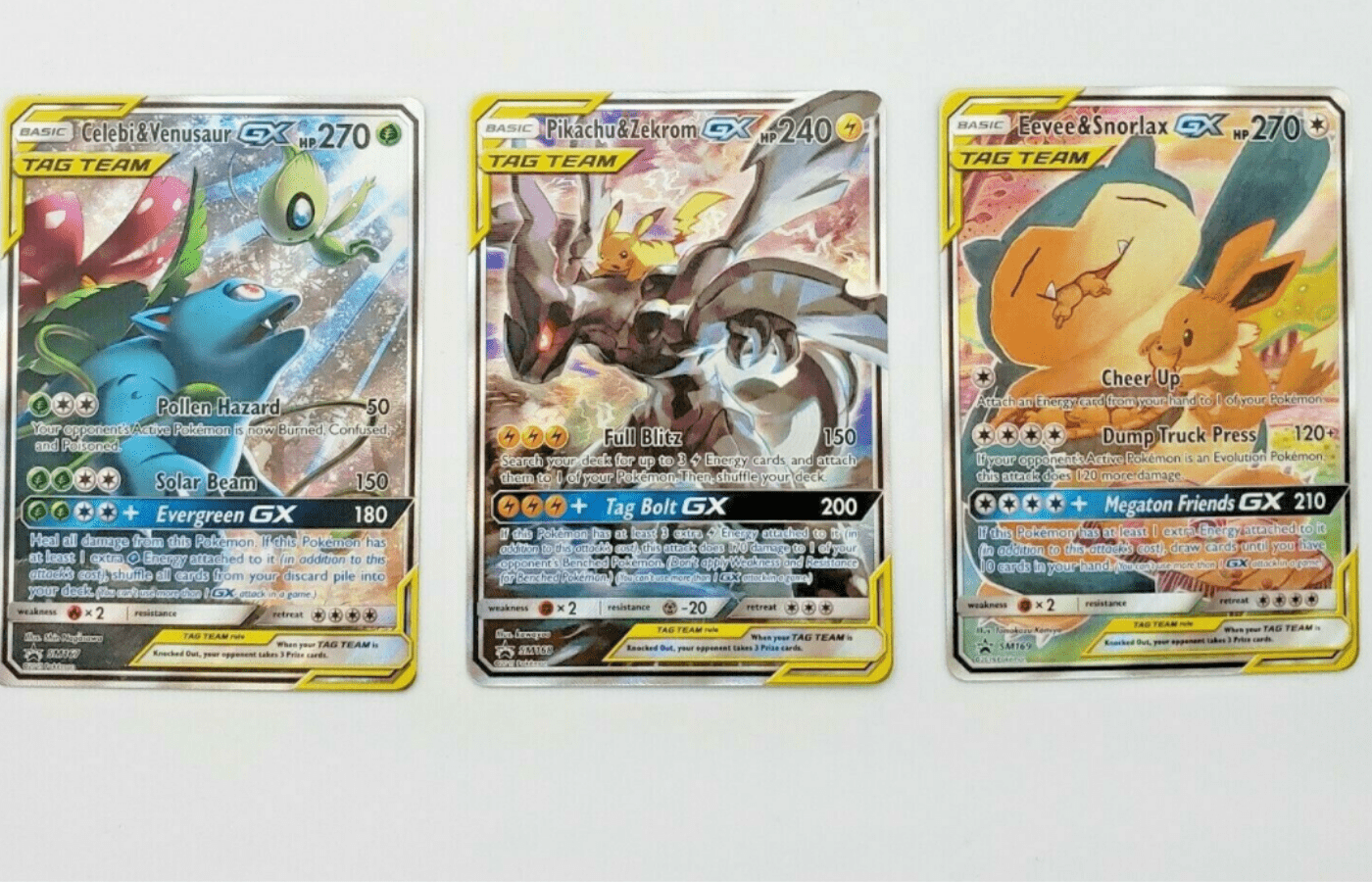 Pokemon tag team cards are among the coolest and most powerful cards in the game. These cards feature dual Pokemon. They are exceedingly rare. It is no wonder everybody loves it when they pull one from a pack.

In order to get tag team Pokemon cards, you will need to open certain Pokemon trading card game sets. They were initially launched in the Team Up expansion, but they have been included in multiple sets since then. If you want to find out whether a particular set includes tag team cards, we suggest that you read through the setlist.

Throughout the rest of this page, we want to tell you a little bit about how tag team Pokemon cards work.

How Do You Get Tag Team Pokemon Cards?

There are two ways that you can get your hands on tag team Pokemon cards:

If you really, really want to get your hands on some tag team Pokemon cards and aren’t too fussed about how playable the card is in the modern game, then your best bet will be to pick up the Tag Team set. A good chunk of the cards found in that expansion are going to be tag team cards.

Other than this, you will want to look at sets that were launched since Tag Team. Most of these will include GX tag team cards. However, they are going to be a whole lot rarer than your typical Pokemon card. We will take a look at that in a bit more depth soon.

If you regularly pick up Elite Trainer Boxes to boost the number of cards you have at your disposal, you will notice that there is a booklet in there. This booklet will list all cards in that particular set. This will let you know whether you can get tag team cards in it or not.

Of course, you can also carry out a quick Google search to know whether tag team cards will be included in the set.

To check the current price and availability of Tag Team Pokemon cards, click here to view the selection on Amazon.

It depends. If you pick up the Tag Team expansion, then they are not especially rare. This is because they are going to be the focal point of the expansion. The common cards are not exactly going to be the most powerful cards in the world, but unless you are playing with them, this probably won’t matter too much.

Pokemon tag team GX cards are incredibly rare, though. This is assuming you draw them from sets other than the tag team set. It may take a good few booster packs before you can pull one.

Some Pokemon tag team cards are going to be rarer than others. As is a staple in the Pokemon TCG now, any card that features Charizard is automatically going to be one of the rarest cards in a set.

What Are Tag Team Pokemon Cards Worth?

It depends on the card. The value of cards will be determined by how sought-after they are. Rarer cards that can be used in actual competitive play will be worth a lot more than common cards that people just want for the artwork.

This means that a Pokemon tag team card can be worth anything from a few cents to over $100.

If you look at various card selling sites online, you will get a feel for how much your particular card is worth.

For the most part, tag team cards work in much the same way as a typical Pokemon card. They are just a slightly more powerful card. You will be able to have a maximum of 4 of each card in your deck.

While most people think Pokemon tag team cards only feature Pokemon, they also come in a trainer, supporter, and special energy varieties. Again, you will be limited to a maximum of four each in a deck.

These cards will work in much the same way as your typical trainer, support, and special energy cards. Just read the instructions on the card and it will tell you exactly what you need to do.

For starters, each GX card will have a GX move attached to it. This is an incredibly powerful move that will often take a good few energy cards to power up. This move can knock out virtually any Pokemon on the field, or it will often have an effect that can be used to draw cards, etc.

There is a caveat to these powerful moves, though. This is the fact that you can use the move just once per game. Once you have used a GX move on a Pokemon, you will not be able to trigger the GX of any other Pokemon until one player has drawn all six of their prize cards.

There is a further rule tied to tag team GX cards, though. Because these are way more powerful than normal GX cards, there has to be a special prize for knocking them out.

If a player is able to successfully knock out a tag team GX card, then they are able to draw 3 prize cards instead of 1. This means that a well-constructed deck could, in theory, win a game just by knocking out two Pokemon!

Pokemon tag team cards can be obtained from most sets after Tag Team.

Pokemon tag team cards are some of the most powerful cards in the game, especially if you are playing a Pokemon GX tag team card.

Some of these cards can be rare, and some may be worth more than $100!