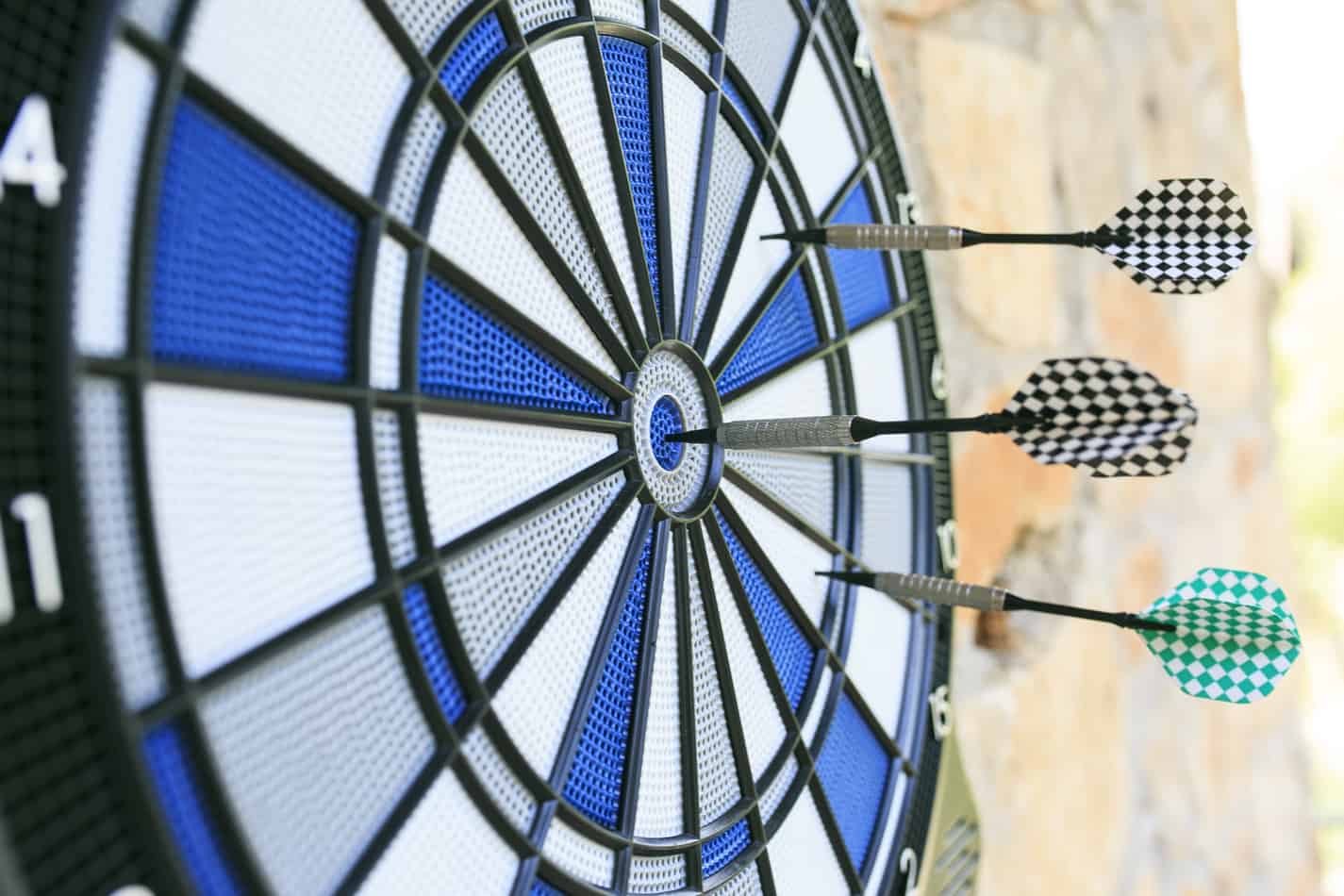 This will challenge even some of the most experienced dart players and isn’t for the faint of heart. Don’t let its challenge scare you though because if you can pummel through the difficult fight, you will be left with feeling victorious.

Bermuda Triangle Darts at a Glance

Using three darts per round, each player must hit a designated target. If the target number is missed using all three of your darts, your score is then halved! That’s just a sneak peek at what to expect when playing this game.

In this detailed guide, we will be discussing the basic rules along with some great tips and strategies for new players and beginners. Every game has its variants, but in this guide we will be going over the most popular form of Bermuda Triangle Darts (Halve-It) that you will find being played.

What You Need to Play Bermuda Triangle Darts

Do you have a dartboard? Check. Do you have darts? Double check. That’s all you need! Although Bermuda Darts started primarily as a Soft Tip Darts game, it can be played on any dartboard with any darts regardless of the tip type. A bristle or electric dartboard are the most common, but you can play this on a wooden or magnetic dartboard as well.

For the best dart experience, we recommend playing games on a high quality bristle dartboard like this one by Winmau. The Blade 5 by Winmau reduces dart bounce outs, and will last you for years to come with proper dartboard maintenance.

This game requires that your dartboard has the standard 1-20 targets as well as an inner and outer bullseye since there are two rounds specifically designed just for the bullseye targets.Once you have a standard dartboard and a set of darts you’re ready to play!

Well almost ready. You need a competitor as well. Don’t be fooled though. This game is a completely viable solo dart game that can help increase your dart skills.

In Bermuda Triangle Darts, the rules are fairly simple. There will be a total of 13 rounds where you will throw three darts at the designated target. Each target is broken up into its own round. The rounds go in a certain order and look like this:

Each round will start with a certain target in mind. Strap up and grab your three favorite darts and prepare to dominate the board. Round 1 starts with “12” as your target number. You will be aiming for a single, double, or treble “12”. The goal is to have the highest score possible when choosing your targets.

Continue this routine of play through all of the rounds listed. However, there is a small game changing mechanic that you need to take into consideration when choosing your prey on the board. If you miss any of the targets in any round with all three of your darts, your total score is cut in half.

If you are on the bullseye round and you miss all three shots, your total score is now cut in half which means all the hard work from the previous rounds is dissipated.

This is the point where your friends become your enemies. A small streak of bad luck can throw the current point leader into last place.

How to Keep Score in Bermuda Triangle Darts

Keeping score can be both simple and complex. Like I mentioned earlier, the goal of this game is to have the highest score possible at the end of round 13. Round 12 is worth 25 points per throw regardless of if you hit the bullseye or not. In every other round, standard scoring is applied.

This means if you hit a double 20, you get 40 points. The game changing pitfall that you may encounter is halving your score. If in any round you miss your target with all three of your darts, your score is completely cut in half.

If your current score is 180 and you missed all three darts this round, your score is now at 90. This rule can happen at any point in the game, but is most common during the bullseye round. Keep track of each players score throughout each round as to not get confused.

How Do You Win Bermuda Triangle Darts?

At the end of round 13 add the total score for each player to determine the winner of the game. The player with the highest score at the end of the game wins.

Don’t forget to mark any round where the player has missed the target with all three darts so you can implement the half-score penalty. That’s it!

It’s very easy to get into the mindset of hitting every treble on every single round, but unless your a world class dart’s player, this probably isn’t the best approach if winning is your end goal.

We recommend to take it slow at the beginning of each round. Start by aiming at the larger targets and once you have landed a successful hit, move on to the double or even treble areas.

This will help you avoid that dreaded half-score penalty that can really take a toll on your score. Imagine missing all three throws on round 11 because you were going for treble 20 each time. Play it safe and land at least one dart before going all out.

Once you have a number of games under your belt, you can start getting into the advanced tactics like progressing from throwing singles to only going for doubles, and trebles. If you spend the time and dedication to master this game, you will see all your hard work and efforts transfer over to all the other dart games you play as well.

Bermuda Darts is both a fun and challenging game for all skill levels in the world of darts. It requires precision, accuracy, patience, and good sportsmanship.

Try playing this game solo to help increase your dart throwing skills. You will be surprised at how quickly your precision and accuracy will improve when you regularly implement this game into your practice sessions.

At the end of the day remember it’s just a game, and don’t be too hard on yourself if you aren’t getting the scores you want. Thank you for reading and give this game a go!