Do you enjoy the fun family feud that comes with UNO? Then you’re going to love UNO Flip. The game is similar to the original one – with a dark side. This can be a great start, even if you’ve never played UNO!

UNO Flip is a spinoff of UNO. What’s unique is that its deck has cards with two sides, Dark and Light. The game starts with the Light side until the Action card called Flip is used to turn over to the Dark side – with crazy rules to set competitors back!

Today, we will discuss the different cards of UNO Flip and the game rules – to bring the Dark side of UNO to your next party!

What Are The Different Cards In UNO Flip?

There are 112 cards with both Dark and Light sides on either face. And these include 18 numbered cards for each color and Action cards.

Related: Best Board Games to Play on an Airplane 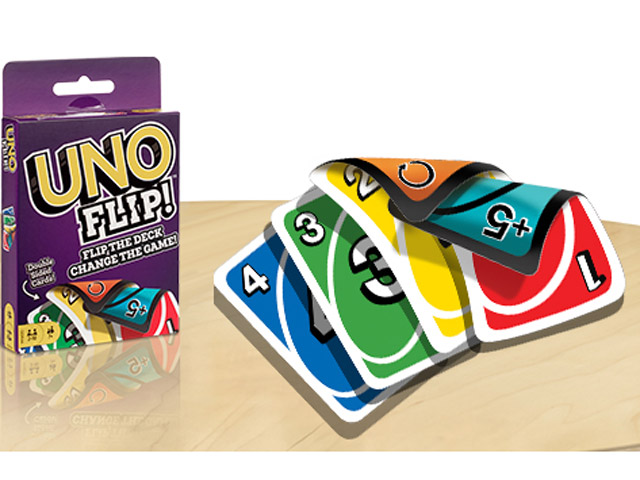 Every card in UNO Flip has a value – including the Action cards. Below is the list of UNO Flip card points

Related: How Many Cards In Phase 10: An Extensive Guide

Take a look at the rules of playing UNO Flip below –

So, if the Discarded card is a Green 5, the first player must play a Green card of any number or a 5 card of any color. They can also play an Action card if applicable (per the rules mentioned later).

If none are available, the player must draw a card from the Draw pile. They can either play this card or forfeit their turn.

The player may also choose not to play a playable card in hand – and draw a new card. But if this newly drawn card is not playable, the player cannot play any other card they hold.

For instance, you’re playing with two other players. The cards in the hands of others are: Blue 6 and Green 2 with one player, and Red 5 and Flip card with the other player.

The total points accumulated by the winner will be > 6+2+5+20=33 (as per card values mentioned earlier).

If you want to understand the rules a little better, check out this video! And remember to download and print a few copies of our UNO Flip rules PDF file.

UNO Flip Card Meanings: What Do The Cards Mean On UNO Flip?

Check out when and how to play the different cards and how you can change the game!

Let’s start by looking at the cards’ meanings unique to the Light side of the UNO Flip deck.

If you play the Draw One card, the next player takes a card from the Draw pile and loses the turn to play. If this is the first card flipped to start the Discard pile, the first player draws a card and forfeits their first turn.

The “+1” sign identifies the Draw One card. There are two cards for each color – you can play it to match the last played card.

So if the player before you has played a Red 6, you can play a Red Draw One. You can also play it if the last card is also Draw One.

If you play the Wild Draw Two card, you can change the next card’s color. The player, after you, draws two cards and loses their turn.

If the Wild Draw Two card is flipped at the start, it must go back into the Draw pile, and a new card is drawn. The Wild Draw Two cards, identified by the “+2” symbol, can only be played if you don’t have a playable card that matches the last Discarded card’s color.

For instance, if the player before you has played Yellow 5, and you don’t have a Yellow card, you can play Wild Draw 2. You are not allowed to play a 5 card in another color or a yellow Action card.

If a player thinks you have a playable card, they can challenge you to show them your hand. If they are right, you’ll have to draw two cards. But if the challenger is wrong, they’ll draw four cards and miss their turn.

If you play the Skip card, the next player loses their turn and waits for the next turn. The first player has to skip their turn if it is played at the start of a game.

The stop symbol on the face can identify this card. There are two Skip cards for each color, and you can play it to match the last played card on top of the Discard pile.

Now let’s look at the cards on the Dark side, which are upgraded versions of the Light side cards we discussed. Since we start the Dark side only in the middle of a game, there’s no question of flipping them to start the Discard pile.

If you play the Draw Five card, the next player has to draw five cards from the pile. They also miss their turn to play in this round.

The “+5” symbol identifies this card, and there are two cards for each color. You can play it to match the color of the last card on the Discard pile.

So if the card on top of the Discarded deck is a Teal 2, you can play a Teal Draw 5 card. You can also use it on another Draw Five card on the pile.

When you play the Wild Draw Color card, you must call a color, and the next player has to keep drawing cards till they find the color you chose. They also lose their turn to play.

Say you call orange, and the next player draws a pink card. They will have to draw another card – and it will continue till they find an orange card.

A deck symbol identifies this card; you can only play it if you don’t have any card to match the color of the last played card on the Discarded deck. A player can challenge you if they think you have a playable card in hand.

When you play the Skip Everyone card, all the players lose their turn to play. That means you can immediately play your next card.

The open circle arrow on the face can identify this card. Two Skip Everyone cards for each color can be played to match the last card on the Discard pile.

Some cards are present on both Dark and Light sides, and the rules are the same. They are as follows –

The number cards are the basic elements of the UNO Flip game. There are four colors on each side, and each color has 18 cards numbered 1-9.

So, there are 72 number cards in total in the deck. You can play these cards to match the number or the color of the last Discarded card on the pile.

If you play the Reverse card, the order in which the players play their cards will become opposite. If this is the first card in the Discard pile, the dealer will have to start the game and go counter-clockwise instead of following the usual clockwise direction.

So, if you’re going clockwise, this card will change the direction of play. So, the player on your right will take the next turn instead of the player on the left.

The Reverse card might be played when the game is already going in a counter-clockwise direction, i.e., from left to right. In that case, the player on your right will get another turn instead of the one on the left.

Two arrows can identify this card in opposite directions. There are two Reverse cards in each color for both sides, and you can play one to match the last Discarded card.

You can change the next card’s color when you play the Wild card. If turned up at the beginning of the game on the Light side, the first player can call the color.

If you play this card and call Red, the next player will have to play a card in that color – or draw a card from the pile. They can also play another Wild card and call a new color.

You can play the Wild card even if you have other cards in hand to match the last Discarded card. There are four Wild cards on each side, which can be identified by the presence of all four colors of the side.

If you play the Flip card, all the cards in the game must be turned over to the other “side” – with new numbers and colors. Since the cards’ two faces don’t match, a Green 7 card on the Light side might have Purple 1 on its back!

There are two Flip cards for each color on both Light and Dark sides. They are identified by the symbol of a card with an arrow, and can be played to match the last card’s color.

Since you’ll start the game with the Light side, the first Flip card will change the game to the Dark side – until a Dark side Flip card turns the game back. The cards in the hands of the players, the Discarded pile, and the Draw Pile will be flipped.

While flipping the Draw and Discard piles, you must turn the whole deck upside down, not individual cards. So, while playing the Light side, the card at the top of the pile will go to the bottom after flipping.

The deck has 112 cards, including the same Special cards used in regular UNO Flip. So, the set of rules is the same as well!

UNO Flip allows you to be a little strategic. You can monitor the backside of your competitors’ cards – and play the Flip card accordingly. So have more fun by keeping the UNO Flip card meanings at the tip of your fingers.

link to Why Is Minecraft Still Popular?

Minecraft has largely been popular since its original release in 2011, captivating players all around the world. Still a beast in pop culture, youtubers and twitch streamers still focus their game...