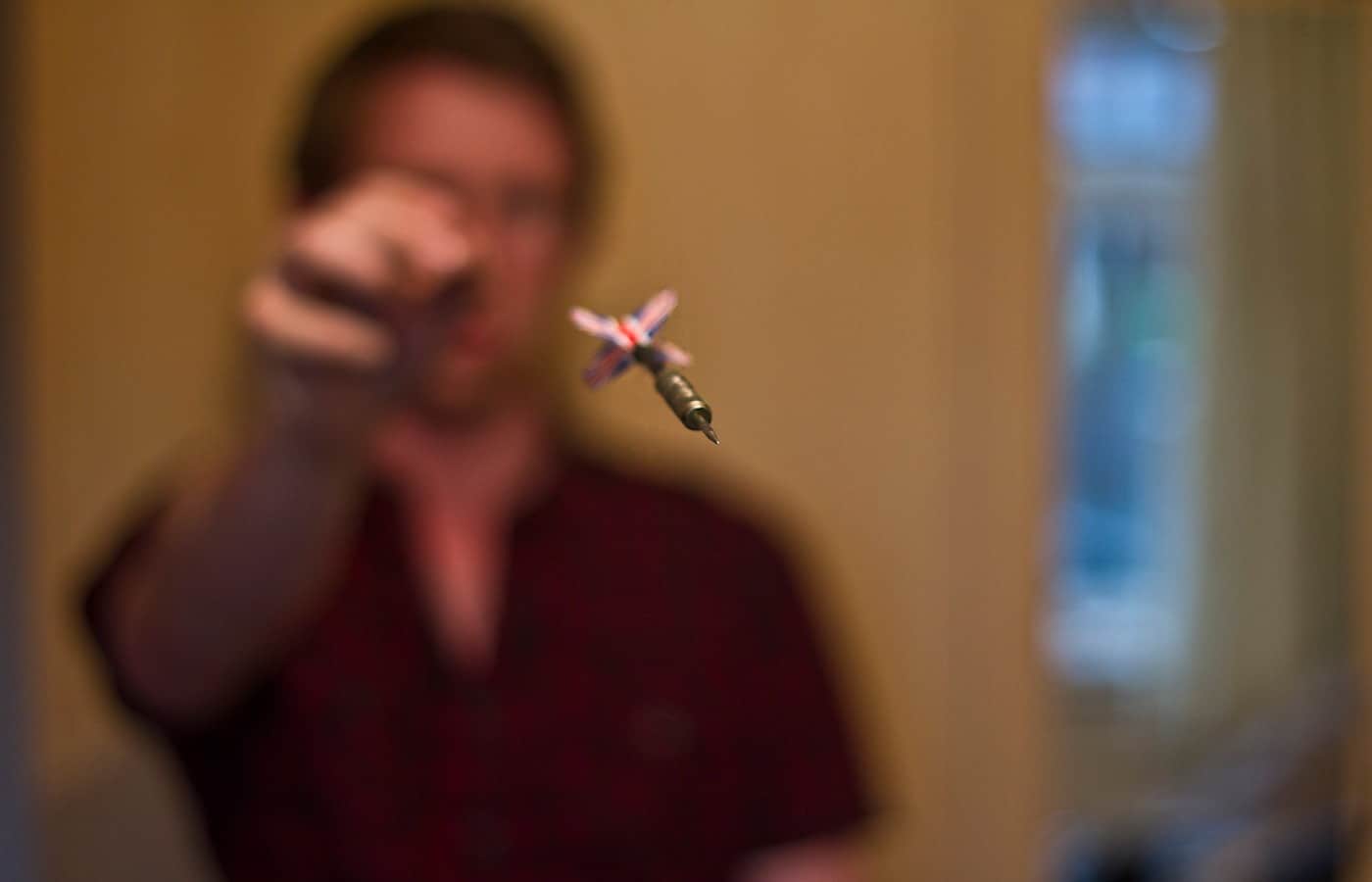 If you’re new to darts or are just curious about the official do’s and don’ts, then you’re in the right place. We’re going to be answering the much-asked “can you throw darts underhand?” question.

The short answer is, no, you can’t throw darts underhand. Not only would this not be very beneficial to you or the game, but it is also simply against the rules.

The official rules state that you must throw one dart at a time, deliberately. Each dart must be thrown with the point facing the dartboard directly. If this doesn’t happen and you throw in some other way (underhand, for example), it will be considered a foul throw and won’t count. Unfortunately, underhand throwing just won’t cut the mustard here!

Can You Throw All 3 Darts at Once?

What Is the Proper Way to Throw a Dart?

Now you know that you can’t throw darts underhand, let’s take a look at how you can (and should) throw them, shall we?

The first thing you need to make sure of is that your feet are hip-width apart and you’re standing behind the throw line (sometimes referred to as the “oche”). Your feet cannot cross the throw line at any time. Even when you actually throw the dart, your toe should never move over the front edge of that line.

The rules state that you can throw from any point of the playing area. You can stand on either side of the throw line as long as your feet don’t go beyond the front edge.

Your front foot must remain rooted to the ground while you’re setting and aiming your shot. However, you’re allowed to let your back heel rise. Just make sure the rest of your foot is in contact with the floor.

Ideally, your front foot should be turned towards the middle of the dartboard. This allows you to throw accurately and can help to keep the rest of your stance aligned too.

Finally, your shoulders and hips should be straight. Your legs, hips, and shoulders should be pin straight to let you throw nicely. Having said that, you can lean your upper body over the line as you throw the dart (keeping your toes behind the line, of course).

You should hold the barrel of the dart with 3 or more fingers. Professionals tend to use their thumb, middle finger, and forefinger, but over time, you’ll find the position that’s best for you.

Try to keep your fingers long and open. When you’re starting on your dart-throwing journey, it’s tempting to grip as if your life depends on it. But, that won’t do your throw any good. So, try to stay relaxed.

Once you’re happy with your grip, raise it to your eye level. You should aim for a 90-degree angle from your shoulder to your elbow to the dart. While you’re at it, keep the tip raised upward.

Remember, the needlepoint should always be facing the dartboard directly so you’re abiding by the rules. You want all your throws to count!

This is the part that will take the most practice. Eventually, everyone will be asking you for tips. But for now, you need to learn the basics.

For a much more detailed and in depth guide about choosing a dart, and other throwing techniques, you can check out our other article about how to throw darts like a pro.

If you’re new to darts, there can be quite a few rules that you may not be aware of. How to throw a dart properly boils down to deliberately throwing one dart at a time with the point facing the dartboard.

The type of dart you use, your stance, your grip, and how you throw all play a big role in accuracy. You must practice all aspects and experiment with different darts to see which works best with your style.

Darts is an easy game to play, but hard to master. If you dedicate enough time and practice efficiently, you will have amazing accuracy.