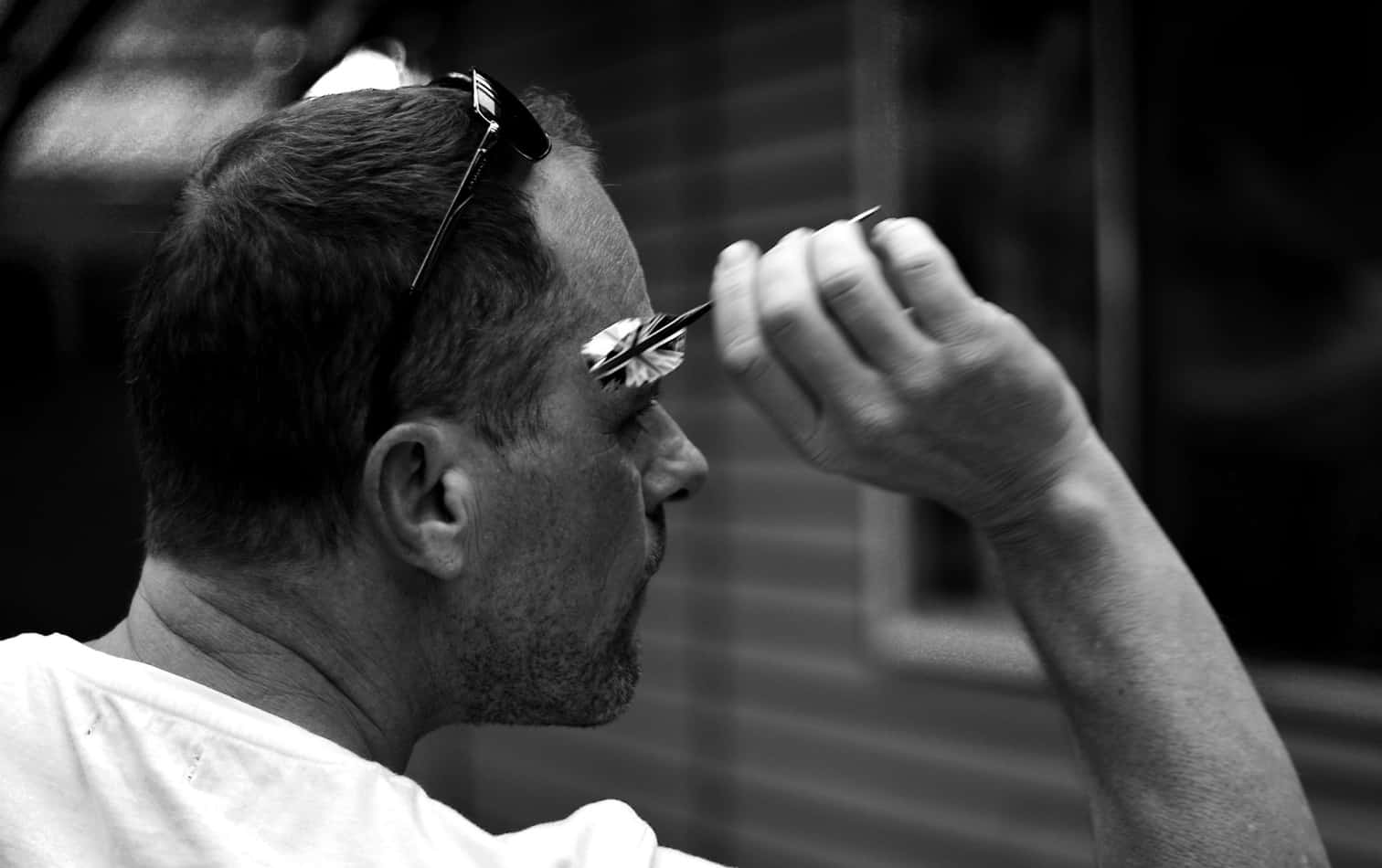 Throwing darts like a pro is not an overnight task. Perfecting your dart throw can take years of practice. There is a lot more involved than just aiming and throwing your dart at a dartboard if you want to be as good as a pro.

The secret to throwing darts like a professional is to know that you have to practice more than just aiming good. You also have to learn and practice the proper dart throwing stance, the proper way to grip the dart, as well as the proper technique of throwing and releasing the dart.

Once all of these factors are practiced and perfected, only then will you be able to separate yourself from the aspiring amateurs and into the level of a professional. We will break down each factor step by step in order to help you up your game when it comes to throwing darts. Let’s begin.

Choose a Dart Barrel That Suits Your Style

There are various types of dart barrels on the market that cater to the different grip styles by dart’s players.

The way the barrel of the dart is weighted also affects its flight which is another factor that comes with user preference.

The flight of a front weighted dart is also more parabolic in nature as it will have a natural curve when thrown before hitting the target.

Rear weighted darts are less common, but they are great if you like to grip the dart near the back of the barrel.

The flight path for a rear weighted dart is also parabolic when thrown, but with a much less slighter curve than a front weighted dart.

A dart that is evenly distributed in its weight throughout the barrel is the most common type of dart. Center weighted darts are great for any grip style as there is usually grip in the front, center, and rear.

Center weighted darts tend to fly straight as the weight is evenly distributed between the dart.

The first step in a proper dart throwing stance is the positioning of your feet. There are many different ways to stand behind the oche, and they are all mostly personal preference. The most common way to stand is to have one foot forward while the other runs parallel to the throw line.

The positioning of your front foot may change depending on if you throw with your right or left hand. Some professionals, like Phil Taylor, stand with both of their feet directly parallel to the throw line for maximum stability and the least amount of movement when throwing.

Once you have found a type of stance to your liking, the next thing you will want to focus on is the distribution of your weight. A good rule of thumb to take into consideration is to have the majority of your weight on your front foot.

Having a slight forward lean will help with your stability and posture before you throw your dart at your desired target. This should come naturally as you shift the majority of your bodies weight onto your front foot.

Gripping the Dart for Maximum Performance

The next phase is just as important as your dart thrower’s stance. It’s the way you grip your dart. There are many different styles of gripping a dart, and it is mostly preference. Among many of the professionals, it is most common to have at least 3 fingers on the dart.

How to Throw and Release a Dart Properly

Once you have a grip that is comfortable, you then want to hold the dart in front of your eyes and use your dart’s flight similar to a cross-hair. Keep your dart as level as you can with your line of sight and take aim.

With a slight forward lean, slightly retract your elbow while keeping your entire body still. Quickly extend your elbow in a forward throwing motion. Release the dart when it is level with the target you are trying to shoot for. This is where looking down the dart’s flight comes in handy.

Don’t beat yourself up trying to find the best grips and stances. One of the best tips i can give is to look up a few of your favorite professional dart’s players. Watch videos of their stance, grip, and throw.

Dart’s is an easy game to play, but difficult to master. It requires a lot of dedication, practice, and self-awareness if you want to play as good as the pros. Start with choosing a dart that has a barrel and weight distribution that compliments your play-style.

Try a variety of different dart stances to see which one suits you best. You may find that you are more consistent throwing with a certain stance over another.

Once you have your dart and stance down, you then need to work on your grip and throw. Just remember to stay consistent and practice. Try playing different solo games that help with aiming. Bermuda triangle darts is a great game to play solo that will also help improve your game.