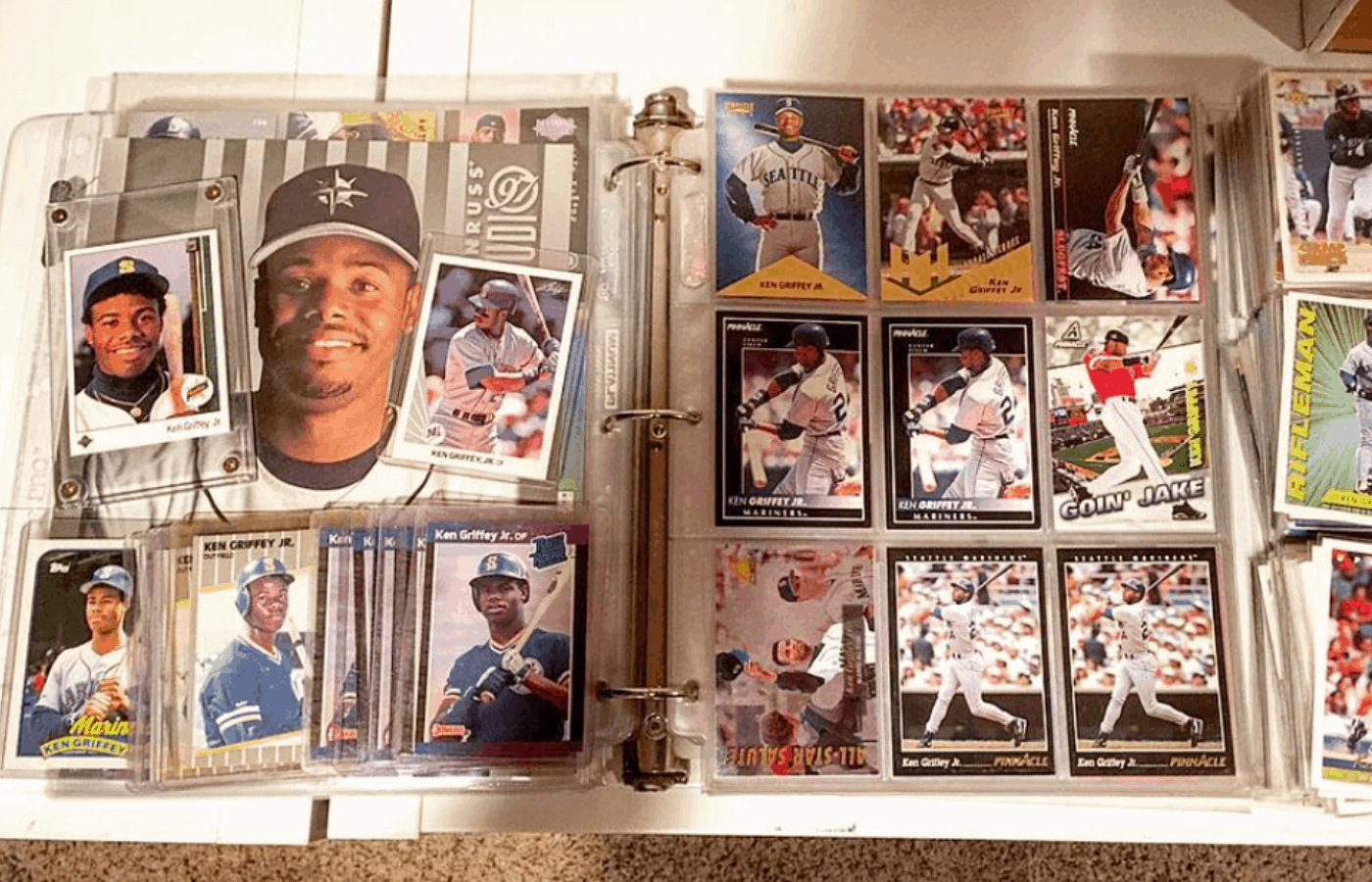 Starting a baseball card collection isn’t as simple as just going to a card store and buying a few that look cool. You need to focus your initial collection, figure out where to get them, and know which cards to start collecting first. It also helps to know what cards are worth more.

There are way too many cards out there to just start and it can get overwhelming, so it helps to start with a plan. Knowing what cards you’re looking for to complete whatever set or theme you’re going for will ease you into it at the beginning.

A lot of people assume collecting certain items is a dead end, but baseball cards have been making a comeback in recent years so you might also want to know how to properly store your collection. Either way, you’ve come to the right place so let’s get started.

How Do You Start Collecting Baseball Cards?

Before you start buying cards, you should narrow down what you’re looking for. With so many cards, sets, and subsets out there, it helps to know a theme or specific set. The most common ones are teams, players, parallels, rares, or to just build a set.

It’s important to note that every collector does things differently, so don’t be afraid to forge your own path or come up with your own theme. Still, these are a good place to start. If you have a favorite team, this is as good a place as any.

Essentially, just keep your eyes out for any card that involves a particular team and snatch it up. This can be anything from players on that team to celebratory cards. As for collecting player cards, though, that’s a whole different ball game.

It may sound easier because you only have to focus on one player, but any given player could have hundreds or even thousands of cards in existence depending on when they played and their history.

If you’re looking for something with a shorter run that might be easier to navigate while being harder to locate, rare cards are a good idea. Parallels usually have around 20 cards in the set, where you’ll have to find the base player card and every color variant.

You can also just go for antiques, referred to in baseball cards as “vintage.” These are cards printed before 1980 and you’ll basically just get to pick which ones you like the most, but collecting rare cards can be more expensive for a first-time collector.

If you’re just looking to dip your toes in the water, possibly the best way to begin is to build your first set. Essentially, this involves you picking a series and collecting every single card in that series.

While there are generally hundreds of cards in a typical series, unless it’s a shorter run of top players from the previous year, this is a great way to hone your collecting skills and narrow down what you’re most-excited about when it comes to the cards.

By seeing all the stats, maybe you’ll decide that you want to go for the top hitters moving forward or find a favorite player that you want to focus on. Set building is an ideal place to start if you’ve got no prior experience collecting cards.

Where Do You Get Cards?

In the modern world, collecting cards has never been easier with so many options. Generally, the best way to get cards is at a card store, online, or through trading or some kind of event. Stores are easiest for first-timers because the employees can make recommendations to help.

The card world is at your fingertips on the Internet and can quickly be too much unless you know what you’re looking for. Once you do, though, it’s as easy sometimes as typing the team or player onto Ebay or Amazon. You can also join a card database online to keep track.

Trading with fellow collectors is a great way to not only get rid of unwanted cards, but use them to obtain what you need to complete a set. Of course, there’s always events referred to as “box breaking.”

Box breaking is like Storage Wars with baseball cards, where collectors buy in at an up-front price for whatever team or player they’re looking for and any card of those sets that comes up when the owner opens the box is put aside.

That one can be both exhilarating and heart-breaking because there’s no guarantee you’ll get anything but you might also get a rare card that you would’ve spent a lot more on.

What Baseball Cards Should I Start Collecting?

There are over a million cards in circulation, so you might want to know the different ones that are out there. These include base cards, subsets, rookies, and then a plethora of various cards that are harder to find.

Go With the Basics

Base cards are the most common ones in existence, with thousands being released each year. Sometimes they’re split up into multiple series’ but that’s still a lot spread out between the numerous baseball card manufacturers.

The base sets typically center on the players from the prior year, though sometimes they’ll focus on the best players. The latter usually have a shorter run, so they’re harder to find but worth looking into.

Since there are so many base cards out there each year, subsets are exactly what they sound like: Sets within the thousands of base cards. Subsets are usually a maximum of around 40 cards that center on similar player statistics, such as batting averages or pitching ability.

The way to know what subset a card falls under is a shared symbol printed on those cards, so it’s easier to identify which subset a base card belongs to. However, subsets aren’t worth as much as many other cards for some reason.

A common mistake that people assume is that rookie cards are from the year a player makes their grand debut on the diamond. In fact, rookie cards are whenever the player first had a card in a big release.

For example, a player could start playing in the MLB in 2005 but have their rookie card from a 2003 set. An important change was made by the MLB to stop this, making rookie cards only available with the player’s MLB debut year via a rookie stamp on the card.

However, manufacturers found a way around this rule by using minor league players as insert cards instead. Because of this, you can technically have a “rookie” card from a player’s minor league years and an official rookie card of that same player.

Speaking of inserts, these are like when you get a french fry in your onion rings. They’re rare sets of cards with one randomized in a card pack, so they’re not as easy to collect unless you know what you’re going for.

You also have parallels, which are basically off-color versions of a base card. The border is usually a different color or foiled and most parallels have serial numbers to identify them. Autographed cards are pretty self-explanatory.

The last hard-to-find cards are called relics, which used to involve memorabilia used in actual MLB games. Modern relic cards now can also include clothing simply worn by a player, be it at a signing or for a PR event. Either way, they’re more expensive and rare in comparison.

Are Baseball Cards Worth Collecting?

The most important thing to understand at the beginning is that collecting anything is probably not a “get rich quick” scheme. Baseball cards are no different and it can take years to have a collection worth selling.

With that being said, consider it a long-term investment where patience is its own reward. Rookie cards won’t be worth much when a player is just starting, but you never know if you’ll have the next Babe Ruth or Alex Rodriguez.

The best part about collecting baseball cards is that there are options for any budget, because you can buy a pack of cards for a few dollars or invest in a few vintage cards for thousands of dollars. It’s all up to you, but patience is key.

Is Baseball Card Collecting Dead or Is It Making a Comeback?

As mentioned earlier, there was a period of time in the early-2000’s where baseball cards weren’t as viable of an investment. However, in the last decade to 15 years, there’s been an increased interest in them and collectors are on the rise.

Because of that, this is actually a prime time to start collecting with cards being a viable investment once again.

Tips For Storing Your Collection

If you’re just starting out, you might want to know how to store your cards so here are the basics:

By this point, you should be good to start your baseball card collection. Set your sights on a theme, whether it’s a specific team or a rare set of parallels, and figure out the best way to shop for cards in that run.

Keep in mind what cards are the most valuable unless you’re collecting for a more personal reason, like a favorite team or player growing up. If you’re in it for a more financial investment, relics and vintage cards can be worth a lot as well as rookie cards.

Whatever you decide to collect and how, remember that baseball card collections are a long-term deal and it might be years before your collection hits peak value. Still, if you have patience and protect your cards you might have a great collection someday!