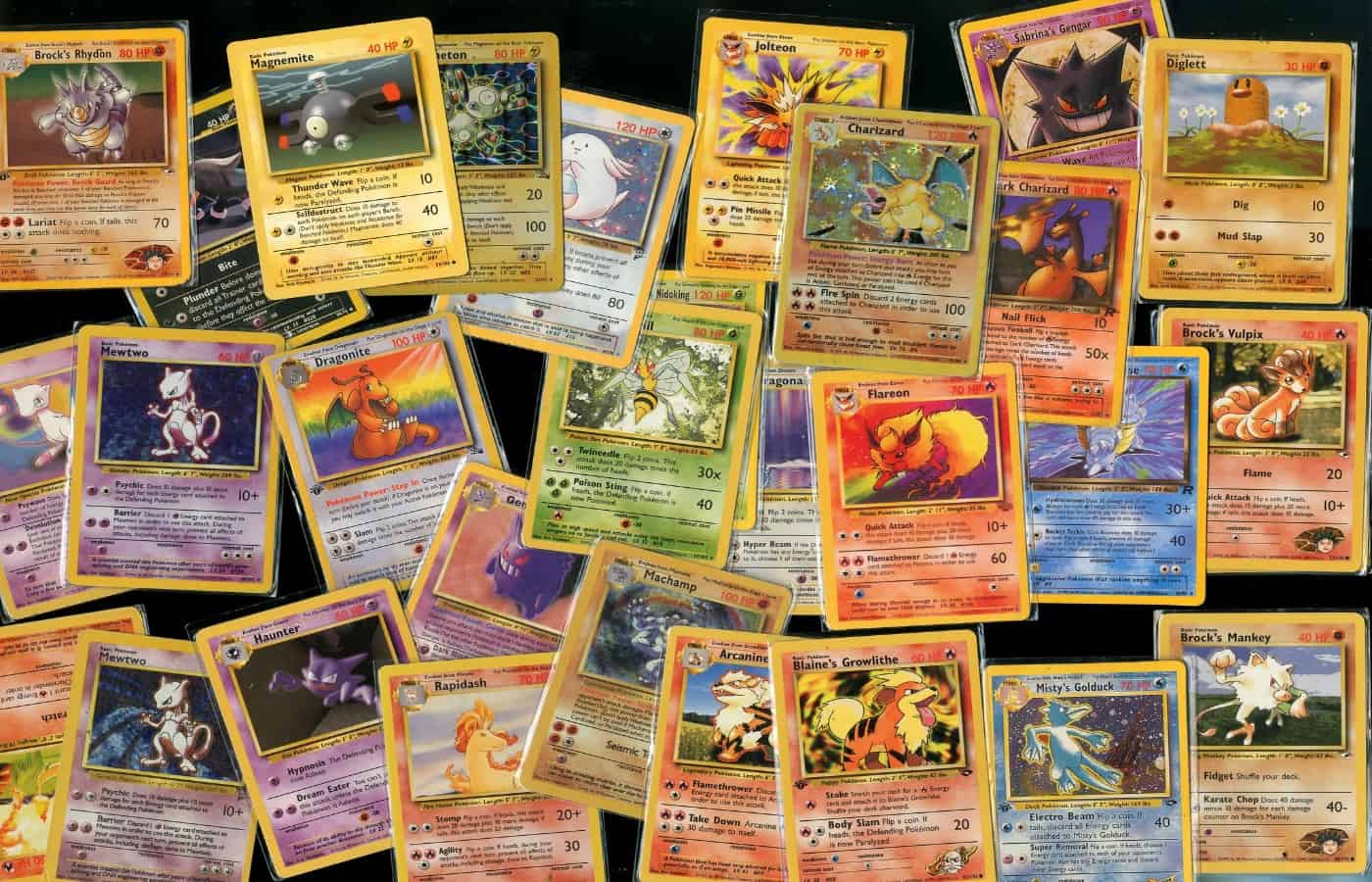 Although some fake cards are still easy to spot, some companies have been getting very good at making fake cards. Print quality, differences in font and text size, and spelling errors are just a few ways to spot fake cards.

Fake Pokémon cards are not just a thorn in the side of collectors, they are also illegal to sell. So, as a Pokémon card collector, how do you identify a fake from the real thing? We have got some helpful tips to help you distinguish between the two.

Look at the Back of the Card

The back of a Pokémon card is often the biggest giveaway when checking cards for authenticity.

The second thing to look at is the area to the top right of the Poke Ball. On a genuine card, this area is blue with splotches of darker blue. On a counterfeit card, this area does not have the characteristic dark blue splotches.

Color Quality on the Front of the Card

You can also spot a badly faked Pokémon card from typos! Authentic cards generally do not have typos on them. Fake cards often get made overseas where English is a second language, and they are prone to spelling errors.

Note that occasionally, genuine cards get misprinted. These misprinted cards are widely publicized by Pokémon collectors and even prized as collectibles. That is to say that if a real Pokémon card gets misprinted, you will easily be able to find out by hopping online and asking around.

The Font Used on the Card

All Pokémon cards have the same fonts. If you notice a difference in the font used – for example, if it looks smaller, less bold, unevenly spaced, you can be sure that the card in question is a fake.

Text on the Front of the Card

The text on the front of a genuine Pokémon card is also slightly worn-looking. Compared to the real card, the black font on a fake card is darker and looks as though it has been printed over a few times with color to make it appear darker.

Check and Feel for Perforations on the Card Edge

A cheap way to create counterfeit Pokémon cards is to print them on cheap cardstock that gets punched out of a larger sheet. Since they get punched out, these cards almost have perforation marks along the edge. Genuine cards have smooth edges.

Size of Icons on the Card

Although this may seem like a small difference, when you put an authentic and fake card next to each other, it is a rather noticeable difference.

Pokémon cards with holographic foil are frequently counterfeited but are easy to spot due to a few common mistakes.

One of the simplest features to spot on a fake Pokémon card is the enumeration. Specifically, look at the health points and the damage dealt.

Genuine Pokémon cards will max out at around 300 points for health and damage dealt values, but some fake cards have values that surpass 11,000!

When made from cheaper materials, counterfeit cards will have a different feel to them. A genuine card will feel thick and like a quality card. Try this with the card that you suspect to be counterfeit, and you will notice a difference.

Fake cards can feel thinner and easily bend with no resistance, where genuine cards are thicker and are more resistant to bending.

In addition to fake cards, counterfeiters also print up entire packs of counterfeit cards. Just like the individual cards, though, there are some ways to identify fake Pokémon booster packs.

Feel the Pack of Cards

When you pick up a fake Pokémon booster pack, you will feel that the foil around it is quite loose, and there seems to be a lot of extra air inside the foil.

Genuine Pokémon booster packs have tightly fitted foil and do not have extra air in the packaging.

You will also notice a difference in the thickness and weight of the fake booster pack. Counterfeit cards are lighter and bend easily, where authentic cards are heavier and do not bend easily.

The foil wrapping on booster packs also differs when comparing a counterfeit and real Pokemon booster pack. The foil on a fake pack is thinner and generally feels of worse quality. A genuine booster pack, however, has a thicker foil that does not tear as easily.

Inspect the Color of the Packaging

Counterfeit packs of booster cards almost always have a noticeable difference in the color of the packaging. The foil of a fake booster pack may be faded or far too saturated, but when placed next to an authentic booster pack, you will notice a difference!

Look at the Size of the Packs

One of the most noticeable differences between a counterfeit Pokémon booster pack and a genuine pack is size! Putting the two side by side, a pack of fake cards may be a different size from the authentic card pack.

This size difference may be in the cards themselves or the dimensions of the foil pack.

Pay Attention to the Cost

There is an old saying that if something is too good to be true, it probably is. This saying is particularly true when you are talking about collectibles. If you find a Pokémon booster pack for a price that is far below every other seller of the same item, there is a good chance that this is a counterfeit pack.

When considering the cost of a booster pack, be sure to look at the number of cards in the pack. Obviously, a set of ten cards is going to cost more than a set of three cards.

Where the Cards are Purchased

When you purchase cards from a well-reputed or legitimate seller, you can expect to get authentic cards. When you buy from a lesser-known seller or a seller with questionable feedback, you put yourself at risk of being conned.

Before you purchase any cards or booster packs, do a little research on who you are buying from. Does the person or store have feedback in the collector’s community? Are there multiple complaints citing counterfeit products?

Oddities When You Open the Pack

When you buy a fake booster pack, you will also notice some oddities when you open the foil. Sometimes you will find that the cards look drastically different from authentic cards, and other times, it may be as simple as cards being frontward and backward in the pack instead of all facing the same direction.

Is It Illegal to Sell Fake Pokemon Cards?

YES! It is illegal to sell counterfeited trademark items like Pokémon cards!

Infringement of copyrights and trademarks are prosecutable by the US attorney’s office. The company or individual who holds the trademark or copyright may also pursue a lawsuit for infringing on their rights.

When you buy Pokémon cards, give attention to every detail of the cards that you get to be sure that they are legitimate. Be sure to look at the back of the cards, the color and quality of the front, as well as any other small indicators that might give away if the card is fake.

Knowingly buying counterfeit items can mean hefty fines, not to mention the fact that the cards you have purchased have no value at all!

If you are unsure whether to purchase a card because you feel that it is fake, know that it is better to be safe than sorry and walk away!