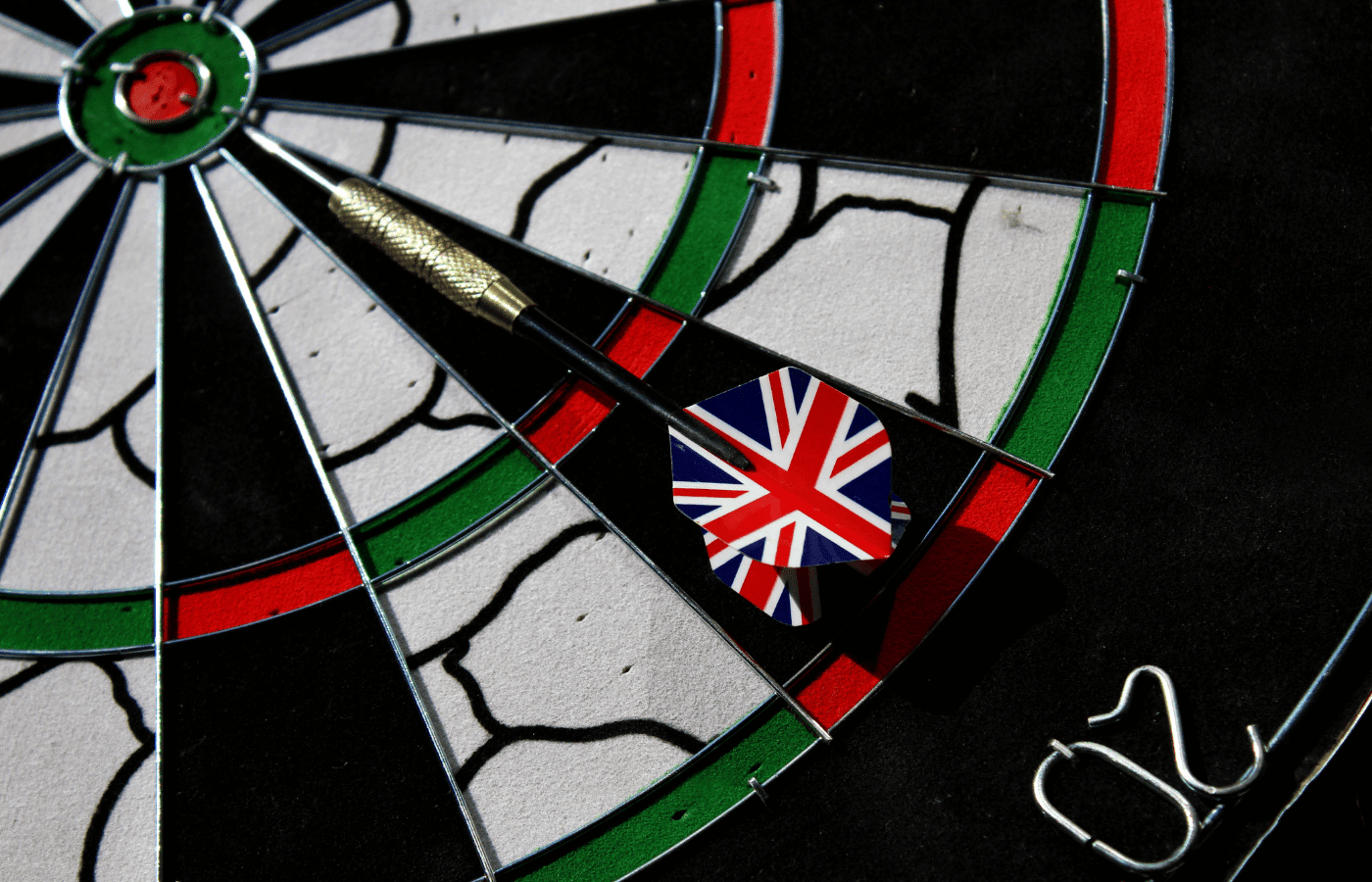 Another popular game choice among dart players is English Cricket darts. It is one of the most popular dart’s games to date, and has been for many years. It tests accuracy, precision, and is very competitive to say the least.

English Cricket challenges even the greatest of dart players and is also a great game to practice accuracy and precision. Although it doesn’t use all the numbers on the dartboard, it does use some of the highest scores on a dartboard, as well as the bullseye.

If you’re a beginner, don’t be scared, its a great game to help you improve your dart throw as well as help get your feet wet in competitive play.

English Cricket Darts at a Glance

What You Need to Play English Cricket Darts

The great thing about English cricket darts is you don’t need many things to begin playing it. You can play it from any room in your house, as long as you have room for the 7 feet 9.25-inch oche.

Let’s start with the most basic yet most essential thing that you’ll need – a dartboard. There are a variety of excellent options available. Popular brands include Unicorn and Winmau; these dartboards are durable and will stand the test of time.

The Professional Darts Corporation in the United Kingdom uses Unicorn dartboards for all their events. Either of these dartboards will do, but you could use any full-size dartboard on the market. You must make sure the board has 20 numbers with double and triple rings.

You’ll need a great set of darts to play this game. The best tungsten arrows on the market are brands like King Cobra, Bottelsen Hammer, Centaur, and many more.

It’s crucial to try which darts suit your throwing style, and they come in all shapes and sizes, so you might have to try a few out to find the perfect darts.

Although not essential, a dart mat is a great thing to have if you’re looking to play English cricket darts. It will measure the perfect distance between you and the dartboard. Furthermore, it will protect your floor from being destroyed by bounce-outs, where the dart falls out of the board.

Many dartboards will come with a scoreboard, and some don’t. However, you will need one to play English cricket darts. If you’re playing in an English pub, you’ll probably have a scoreboard anyway. But if you’re at home, you may need to purchase one or draw one on paper.

There are many fantastic dart games that you can play alone, but English cricket darts is one where you need opposition. If you have two players or two teams, you can play this game. However, it is entirely possible to practice this game alone.

Now you have everything you need to start playing the game, let’s talk about the game rules and play it.

When beginning the game, you must make sure you have the scoreboard ready and completed. Proceed to write the two teams’ names on the top, and between the names, there needs to be a vertical column.

The column must have the numbers 15-20 and B for the bullseye. It would help if you recorded all the scores on the scoreboard to keep track of the scoring.

Before you begin playing, you must decide who throws first or which team throws first. You can do that via a simple coin toss, or you can do the best of 3 throws and see who scores the highest – they will throw first.

Like regular dart games, each player or team will take turns and throw three darts. The teams or players will try to hit the 15-20 or the bullseye. A team or player’s primary goal is to close out the number, but you must hit it three times to do this.

How to Keep Score in English Cricket Darts

You can play this game without keeping score by taking note of who is first to close all the numbers and the bullseye.

But most players and teams will opt to count points as this is the traditional way of playing English cricket darts. If the dart hits the double ring, it is two hits. And if the dart hits the triple ring, it counts as three hits. Ideally, a team or player will be aiming for the treble to close numbers faster yet score the most points.

The bullseye counts as two hits, and the outer ring is just one hit. Furthermore, the points that are awarded to the player are the same as the number you hit. For example, if you hit double 20, then you will score 40. If you hit treble 18, then you’ll score 54 points. And if you hit the bullseye, you will score 50 points.

After the number has been closed, you will get the points added when an opponent hits a number that you’ve already closed.

How Do You Win in English Cricket Darts?

The most popular strategy used by players is to start at the highest number and work their way down. Many players like to finish on the bullseye because it’s hard to hit, and it’s the legendary finish in a game of darts.

To win a game of English cricket darts, you must close all the numbers and have the highest total score. If the player or the team closes out all the numbers yet is still behind in points to their opponent, they will need to keep scoring on all the numbers they haven’t closed out yet.

The aim is to close out the numbers as fast as you can and, more importantly, score as high as possible while the numbers are open.

If your opponent closes every single number on the board before you pass their score, they will win the game. Alternatively, if you close all the numbers and your score is ahead, you will win the game. The best strategy is to score as many points as possible, which is why most players will directly target the trebles.

The game does sound confusing on paper, but it’s straightforward once you begin to play. The best way to win the game is by repeatedly targeting the highest numbers while closing out the number. For example, if you hit three treble 20s during your throw and hit 180 points, that’s a massive step towards victory.

Alternatively, if you close out the number by only hitting three single 20s, that gives your opponent an advantage.

Being good at English cricket darts is very similar to regular darts. You must stay relaxed during the game to prevent the body from jerking and pulling the dart; if there is any movement during the throw, you will pull the dart with the action. Staying loose and focused is the key to hitting the best scores during the game.

It would help if you also focused on key fundamentals of your game, such as the darts’ grip. If you have a grip that is too tight or soft, it can compromise the accuracy of the darts.

It is the best idea to practice everything from your grip, your stance, and the speed of the throw repeatedly to perform well during a game of English cricket darts.

Playing English cricket darts is a game that you master through practice, and you can practice this game on your own. In your spare time, go over and over the scoring system and your technique to prepare yourself better for the game.

Use Your Preferred Set of Darts

Another great idea is to make sure you have the right darts. It’s possible to pick up any set of darts and enjoy this game, but if you want to perform at the best of your ability, use a set of darts you practice with. It’s essential to be comfortable with the weight of the dart, leading to consistency and high-performance.

You must also make sure you have a good set of flights on the darts. If you have damaged or worn flights, it can lead to inconsistency in the throwing of the darts. It’s the best idea to have a set of flights that you use regularly and have them ready for your game.

Another great tip is to have a dartboard that isn’t old and worn. One of the common complaints of players is the dart falling out of the board when attempting to hit doubles, trebles, and bullseye’s – that is very common on old boards. And guess what? You won’t get the point for a dart that falls out. It’s a lose-lose situation, so have an excellent dartboard ready.

English cricket darts is a popular game between dart players in England. It’s a fun game that you can play for fun between friends, and a game that can be played competitively at the same time.

Although the game takes a short while to understand, it becomes second nature once you start playing the game.

And better still, it’s a fantastic way to improve your overall darts performance for other games.