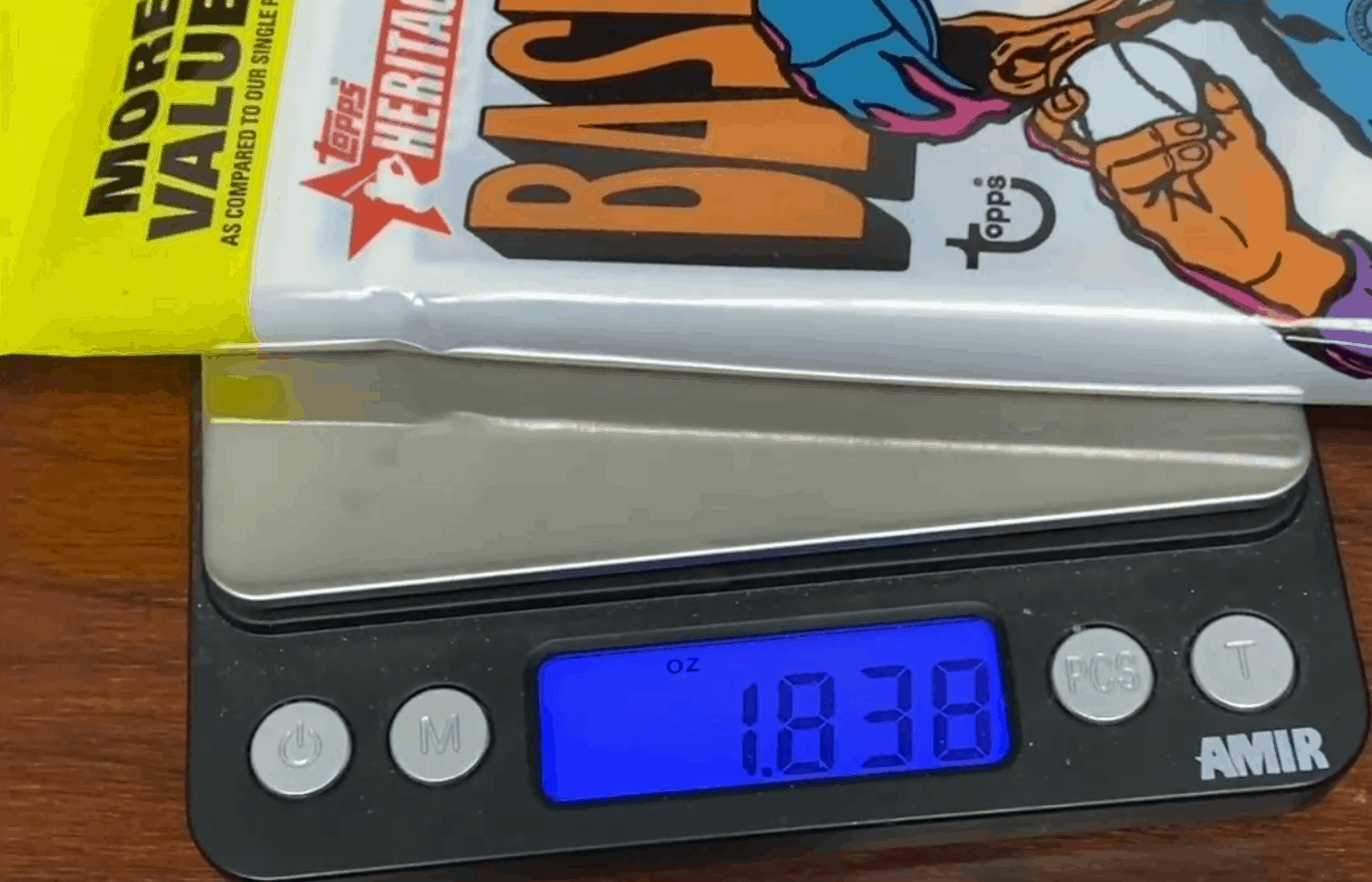 Some sports card packs weigh more than others. But this is difficult to determine since various manufacturers swear there’s no difference in printing. But, this comes from an article written in 1991 published in the Chicago Tribune titled, “Looking for Premium Cards? Bring a Scale,” by John Leptich.

However, we can verify this claim still exists from an email inquiry to Topps from June of this year, 2021. The company stated under no uncertain terms that they have no idea how much a single baseball card of theirs weighs.

So, how do you weigh sports card packs if the companies themselves won’t divulge that information? At the very least, you will first need to acquire a gram scale. But, if you have a box or pack with some heft to it, you’ll need a flat scale.

How Do You Weigh a Sports Card Pack?

You can usually weigh a sports card pack with a simple scale. They’re fairly inexpensive and you can buy them at home improvement stores, art supply shops, science surplus stores and major superstore centers. But, before you go weighing a sports card pack, you should determine your reasons for doing so.

If you’re looking to weigh a pack of cards for shipping purposed, then you’ll have to weigh it so you know how much you’ll pay in postage. This information will be valuable to potential buyers so they can decipher the pros and cons of buying with the subsequent shipping costs.

But, if you’re looking to get a pack containing a special card, like a holographic one or one laden with 24K gold, this practice is not advisable to do in-store.

If you are trying to weigh sports cards we recommend using a scale like this one, which can be found on Amazon, since it is pocket sized and weighs in .00g.

Weighing Packs in the Store

To many people who respect the integrity of sports card trading, pack weighing has become quite the scourge among the hobby. In the event you’re attempting to find a pack with a special type of card inside, these packs are going to weigh more. The practice isn’t illegal, but it is a form of cheating.

Although the ethics of the situation may not be immediately apparent, think of it like this: you win big while everyone loses and wastes their money. It’s about being fair and maintaining a sense of personal dignity. And, before you may want to argue how life isn’t fair, which is true, why would you personally want to add to that unfairness?

Of course, there are degrees of nuance to this type of unethical behavior. But, this practice is becoming more normalized. and become an ever-increasing problem since the introduction of Pokeman cards becoming part of the mix. So, even if it is inevitable, it’s still wrong to do.

How to Weigh a Sports Card Pack

How you weigh the pack of cards will depend on if you have a flat, pad-type scale or a dinky handheld one. For digital flats, turn on your device and calibrate the scale to ‘0.’ Set the pack on top of the surface and wait for the numbers to stabilize.

For manual scales and handheld ones, ensure you have a well-calibrated scale before beginning. When all is a-go, place it on the tray or clip the pack at the top in the center. If you have a vintage pack, be very gentle with clipping it. Wait for a steady balance and take the reading.

Of course, when in doubt, you could always go to your shipping provider and use their scales too. Most often they have accurate calibrations and they’re free to use. This may be a good idea to do for the purposes of double checking the calibration validity of your own scale.

How Much Does a Pack of Baseball Cards Weigh?

It’s difficult to say how much a pack of baseball cards weigh. If it’s a small pack of less than 10 cards it can weigh anywhere from one ounce to four ounces. But, if it’s a large pack with around 67 cards, it can weigh just over 12 ounces. In the case you have box with 330 cards then you’re looking at around 1½ pounds.

What compounds this is whether there are premium inserts or not. Premium packs will weigh more than the average. For instance, Upper Deck 1991 baseball packs will either have special Fergie Jenkins, Nolan Ryan, Hank Aaron, Gaylord Perry or Harmon Killebrew cards.

Leaf baseball also featured the special Gold Leaf Rookie cards that same year. These are borderless cards with some gold piping. Both of these pack types weigh significantly more.

What Is the Weight of a Football Card Pack?

Football trading cards have the same weight discrepancies as baseball cards. Basically, the more cards you have in a pack, the more it will weigh out. Using a solid scale will be your surest bet.

What Is the Weight Difference Between Specialty Packs of Football and Baseball Cards?

On average, you’re looking at packs being around ½ gram heavier when they’re specialty packs that include things like superstar player cards. However, that can become heavier by a gram or more in the case of gold gilded or holographic ones.

Many manufactures claim they use the same card stock for an average set of cards. Only specialty cards or limited edition prints may comprise a thicker or heavier type of material. Most compose cardboard with a single card weighing anywhere from ½ gram up to two ounces.

What determines such a difference in weights is the material. So, although many cards are of cardboard, there are some cards made from plastic, silk, porcelain alloy or other woven fabric. Of course, this also depends on the original printing year and how much ink goes into printing them.

How Do You Weigh Blaster Packs?

You will need a heavier duty scale to weigh blaster packs, so visiting the place you plan to ship from may become an imperative visit. Blaster boxes are what go to retailers to open and sell the packs inside. These are large numbers of cards with a great amount of weight to them.

But, these are also available for purchase by the public. They come in a range of sizes and packaging types. These are a fairly new phenomenon and mostly began in the 80s and 90s, when trading sports cards was at the pinnacle of its popularity.

Blaster packs have a set number of individual packs and come at a price below what the normal cost for each pack would be individually. The price will depend on the quality and quantity of the cards along with any special bonuses inside, like a free pack or a featured insert.

Do not weigh blaster packs at the store, it’s in poor taste and you may find yourself smeared in an online forum post or in a video on YouTube because someone caught you in the act. Sure, you might become famous, but not in the way you’d probably want.

Can You Weigh Basketball Card Packs or Football Packs?

You can weigh both baseball card packs and football card packs, but the ethics remain the same as mentioned above. What is your purpose for weighing them? If you’re looking to buy, sell or trade your cards online with the added shipping potential, then you’ll need a scale to determine the weight.

Usually a gram scale will work for most packs, but heavier ones, like blaster boxes, will require something capable of handling the heaviness. Scales provided at shipping centers will be freely available for your use. But, if weighing cards is part of your online business transactions, it may be wise to invest in a solid one of your own.

Because of the delicate ethical nature surrounding the weighing of sports cards like ones from baseball and football, it’s important to determine your reasons for wanting to weigh them in the first place. If you’re looking to do business in the trading game, then you’ll want to get a scale so you know how much things weigh.

But, if you’re looking to weigh the cards simply to be greedy, then you may want to reconsider your priorities. For decades, weighing packs in-store is very much a shyster-type of move. Although this isn’t illegal, it isn’t fair to others.

Yes, packs with premium inserts like 24K gold piping or holographs will cause any pack to weigh more overall. But doing this is less than dignified or respectable. Besides, with cameras in every store and on each person’s smart phone, do you really want to become the creature feature of the week?