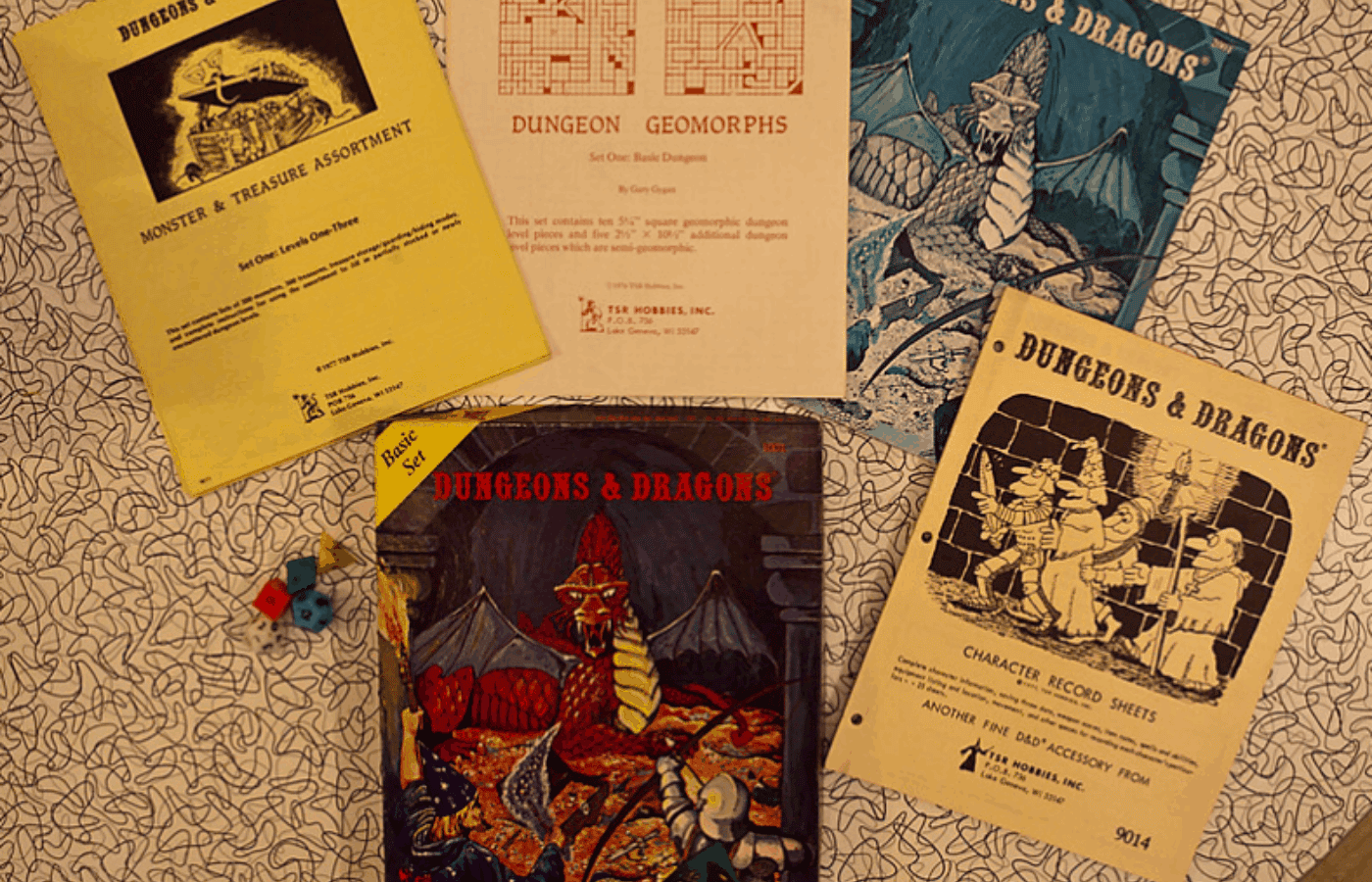 Back in 1972 in a basement in Lake Geneva, Wisconsin, Gary Gygax and David Arneson were playing a Lord of the Rings styled game that Arneson had written called ‘Blackmoor’. The game had 18 pages of rules and had been inspired by a medieval combat simulation game that Gygax had written called ‘Chainmail’.

After a fun gaming session Gygax asked for a copy of Arneson’s 18 pages of rules and got to work, expanding those original 18 to 50 pages and testing the resulting game with his two children. Dungeons and Dragons was born. There is no doubting that everyone has heard of it. 40+ years later it’s still the subject of the occasional joke and jibe (to the uninitiated) but is Dungeons and dragons still popular?

Not only is Dungeons and Dragons still popular today, but it’s probably going to outlive everyone reading this. Don’t believe us? Today we’re going to talk about Dungeons and Dragons and how it’s impacted past and modern culture. Those of you who have never played it might not realize it, but pieces of the game and its influence are all around you. Let’s get started with why it is so popular.

Why Is D&D so Popular?

In France there is a famous cave called ‘The Chauvet cave’ and inside of it there are some paintings on the wall depicting what is believed to be a volcanic eruption. It’s a 36,000-year-old piece of evidence that states quite clearly that storytelling is a deeply ingrained part of human experience. If we had to quantify why D&D will never die, that would have to be the reason.

Dungeons and Dragons is a game of the imagination. It’s an epic story that never ends and you get to be part of it. Now, if you’ve never played it, you’re probably imagining a bunch of people just playing some sort of ‘story improv’ and there’s a little truth to that but it’s also quite a bit more.

Take the clever execution of the game. What you need to play are your rule books, some regular paper, a little graph paper (to map dungeons), and the iconic dice:

The Dungeon Master is the ‘main storyteller’ who designs and rules the world that players will be exploring and to keep the fantasy realistic and thus more fun, the dice decide the result of your actions, how your characters fare against different attacks like spells of poisons, and often what treasures you get.

In fact, there are enough randomized tables that with a set of dice you can play it alone (in places like, cough, detention).

Once you’ve learned the rules, the sky is the limit, so the game is the ultimate form of storytelling. Since the only limits are imagination, there is always something to do, and you can be anyone you want to be. Want to be a fireball-hurling, evil wizard? You can do it. Feel like picking locks and walking across a tightrope like Batman? Roll up a Thief-Acrobat character and you’ve got it

Wizards, Warriors, Priests, Assassins… the roles you can play are many and varied but as in real life, you’d better be careful… Sometimes the dragon wins.

Ultimately D&D is still around because storytelling and imagination are at the core of what it is to be human. What can stop imagination?

When Did D&D Get Popular?

If you were around in the 80’s you might remember that if you looked around the old ‘Toys R Us’ stores you could find these interesting little books known as ‘Dungeon Modules’ right next to the 1983 Dungeons and Dragons box sets that depicted a 2-story house-sized Dragon on its hoard of gold with a single, valiant warrior sporting a shield, a horned helmet, and a sword that he’s swinging at the massive beast on what is presumably his last day alive.

These dungeon modules had titles like ‘Tomb of Horrors’ and ‘Hidden Shrine of Tomoachan’ and inside each was a fully mapped dungeon, already populated with monsters, traps, treasure, and riddles. Kids and adults were playing them everywhere and this is when things started to take off, though mostly in secret because playing Dungeons and Dragons kind of made you a geek and a bully-magnet.

Oh, and ‘Tomb of Horrors’ was extremely unfair when you got to the boss villain, earning Gygax a lot of hatred ever since it’s 1978 release. If you played it back in the day, you know what we’re talking about!

Anyways, playing back then got you a ‘geek’ label and from certain religion groups, it also got you a ‘satanic’ label, too. Times have changed quite a bit and to demonstrate how much, we’ll start off with that whole ‘Dungeons and Dragons is Satanic’ thing.

Back in the early 1980’s when two troubled kids sadly took their own lives, religious groups found out that said kids liked playing D&D and the witch-hunt was on. Whether this had a baneful effect, we really couldn’t say. Those of us who lived through that simply remember that some of our friends had to hide their rulebooks.

You could still buy them at bookstores and Toys R Us, though, so it’s more likely that the controversy boosted sales.

Fast-forward to modern day and no one seems to have the opinion that D&D is bad anymore. In fact, it’s being used in very interesting ways. Therapists are using it to teach social skills to autistic kids. Some teachers organize summer camps and after-school groups where they play D&D.

One UCLA researcher even modified the original game and played it with a third-grade class, discovering with amazement that the kids were improving their reading comprehension, conflict management, and their math skills!

If you like Game of Thrones, it might interest you to know that George R.R. Martin is a Dungeons and Dragons player. So are some other celebrities that you might have heard of, such as Vin Diesel, Joe Manganiello, Stephen Colbert, Deborah Ann Woll… try Googling ‘D&D celebrities’ and you’ll see for yourself, there are quite a few out there.

It’s not just for ‘nerds’ anymore.

There have been Dungeons and Dragons movies, cartoons, and it’s all over video games. Classics such as Neverwinter Nights, Baldur’s Gate, and Icewind Dale are a few examples that follow the official rules, but most of role-playing video games out there wouldn’t even be around if we didn’t have D&D.

It’s also had mention on numerous popular shows, with D&D jokes being popular staples on cartoons like Futurama, The Simpsons and Southpark. Cult shows like Mystery Science Theatre 3000 even lobbed out classic gem-quotes like the one on episode 301 – ‘Cave Dwellers’, where a man in medieval garb is thrown into a snake pit and the show’s host, Joel, quips ‘ouch, I fell on my 8-sided dice!’.

Another mark of the games popularity is that people pay top dollar to play it in interesting locales or with particularly clever ‘Dungeon Masters’. For instance, in Staffordshire, England people are paying $2650 to spend 4 nights playing Dungeons and Dragons in Caverswall Castle!

Some people are even making extra cash by hosting games. According to a story in Bloomberg Businessweek, there are Dungeon Masters out there who earn as high as $500 for one gaming session. These sessions are done at birthday parties, team-building events, and even bachelor parties.

While we can’t say that it’s going to be here forever, Dungeons and Dragons is a game that is beloved worldwide and it’s not going to change anytime soon. In fact, in 2020, sales jumped 30%. Whether this was a response to quarantine or not is hard to say, but the game is still going on strong after 40+ years.

The rules have undergone numerous iterations, with the current edition being ‘Dungeons and Dragons 5E’ and if you have never played it is well worth the investment. Alternately, look for Comic Book conventions coming to your town. Cons always have gaming sessions going on and newcomers can always find a group to welcome them.

Is Dungeons and Dragons still popular? You bet it is. It’s the stuff of epic stories and the heroes and villains are sitting at the table with you. So, find yourself a group and you can see for yourself. Just be sure to bring along some Cheetos and Mountain Dew and you’re sure to be welcomed!