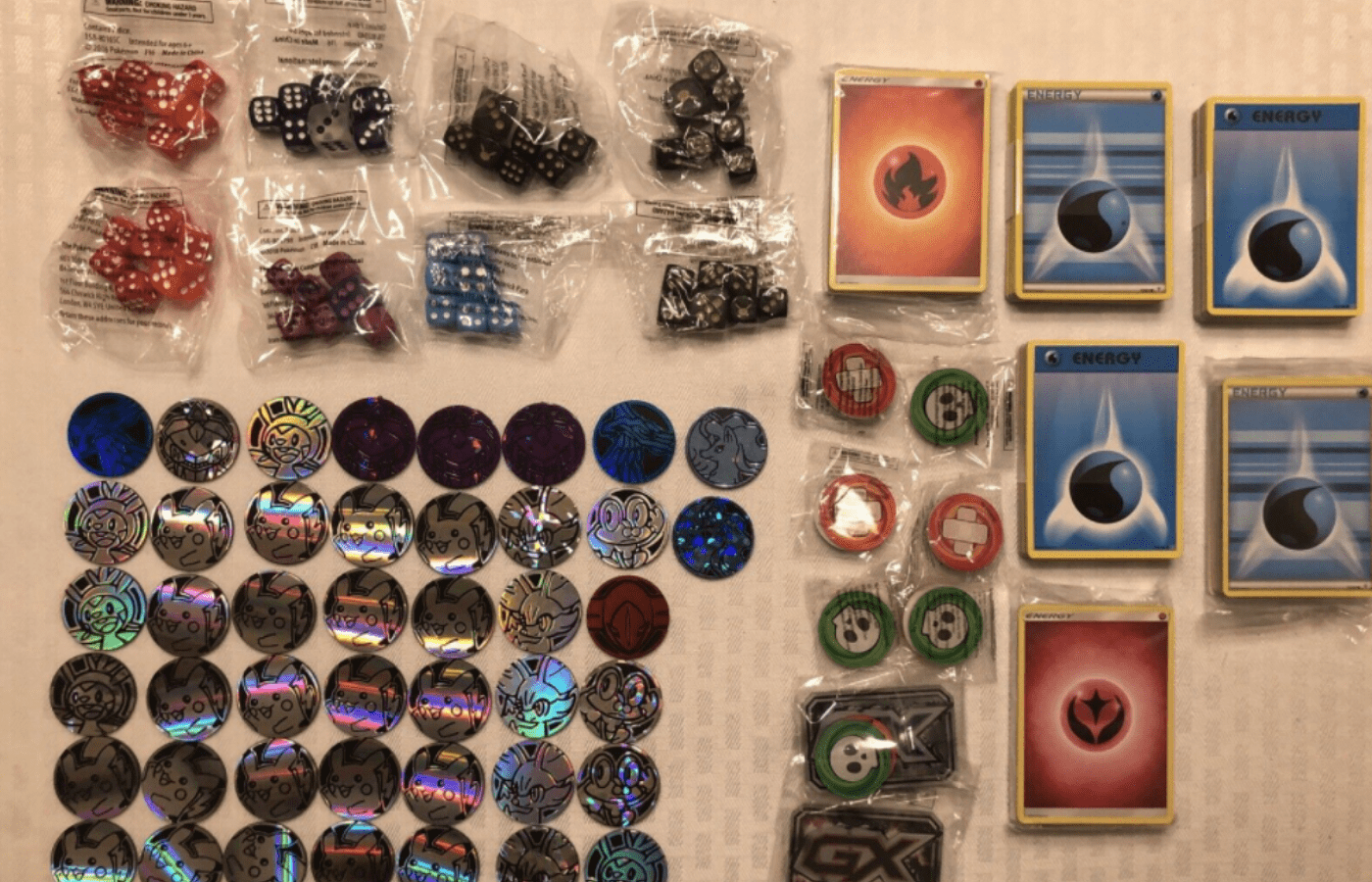 If you watch an official Pokemon Trading Card Game tournament, you will notice that people are using dice. So, what are they for? Do you really need one? That’s what we want to take a look at on this page.

Pokemon dice and counters are used for a lot of different things in the game. They are often used to display the health of a Pokemon. However, they can also be used to show damage boosts, status effects, and they can even be used to determine who makes the first play in the game.

Throughout the rest of this page, we are going to tell you absolutely everything that you need to know about Pokemon dice.

Do You Need a Dice/Damage Counters to Play Pokemon Cards?

No. You could just play the game using just the trading cards, but you are making your life a whole lot harder.

The main purpose for dice in a game of Pokemon TCG is to show how much a health a particular Pokemon has left i.e. they act as a counter. If you do not have dice, then you are going to need to try and remember how much health a Pokemon has. This can cause all sorts of issues if you are in disagreement with your opponent.

Some people will also use dice to track status effects on their Pokemon. However, this isn’t really the main use for the dice. Nowadays, you can purchase special counters that you can place directly onto those Pokemon cards. If you purchase an Elite Trainer Set, then there will always be a few counters in place.

The final reason why people use a dice is to determine which player goes first. Basically, the dice can act like a much fairer coin. We are going to talk more about that in a short while!

Why Do You Receive Dice/Damage Counters in an Elite Trainer Box?

Many people purchase Elite Trainer boxes when a brand new Pokemon set launches. This is because it is often going to be the cheapest way to get your hands on several booster packs at once.

If you dive into an Elite Trainer Box, you will often get a lot more than just the booster packs, though. You will get some card sleeves, status indicators, damage counters, and some dice!

The reason why you get dice in one of these boxes is that the box has been designed for those that are planning to play the Pokemon trading card game competitively. This means that you get everything that you need to enter a competition inside of the box. This is why you get all of those energy cards!

In theory, you can use any dice that you want to manage damage on Pokemon. However, the ones that you get inside of the box are so much cooler because they are official Pokemon dice!

To check the current price and availability of Pokemon Dice and Damage counters, click here to view the listing on Amazon.

What Are the Different Types of Dice in a Trainer Box?

When you open that trainer box, you will notice that you have two different types of dice.

The main ones inside of that box will be 6 damage counter dice. These will be the standard six-sided dice, although they will be rather small. They are designed only for damage counting. You cannot use them as standard dice. This is because they have not been balanced correctly, and thus if you roll them on a table, you will get the same outcome from the dice most of the time.

The second type you get will be much larger. This is known as a coin flip dice. It will have been properly balanced to ensure that when you roll the dice, you will get different outcomes from it.

Are Pokemon Dice Worth Anything?

Most of the time, no.

At the most, Pokemon dice are going to worth just a few dollars. They are actually one of the least valuable parts of a Pokemon Elite Trainer box.

The whole reason why they do not have much in the way of value is that the vast majority of people that buy Pokemon TCG cards are doing so because they want to collect them. They are not actually playing with the cards.

Since the dice are only ever used for playing, most people don’t want them.

You may find that the coin flip dice will be worth a little bit more than the six-sided dice. This is because the coin flip dice will always have the set logo of the Elite Trainer Box that they are pulled from. Some people love to collect those logos. However, since Elite Trainer Boxes are not all that rare, most people just buy their own boxes and take the dice from that.

Pokemon dice can be used for a variety of different reasons. The vast majority of people will use them as damage counters when they are playing the game.

You do not need to use Pokemon dice when you are playing with your cards. However, it can make your life a whole lot easier. It means that there will be less to track in your head.

The easiest way to get your hands on Pokemon dice will be to pick them up from an Elite Trainer Box.