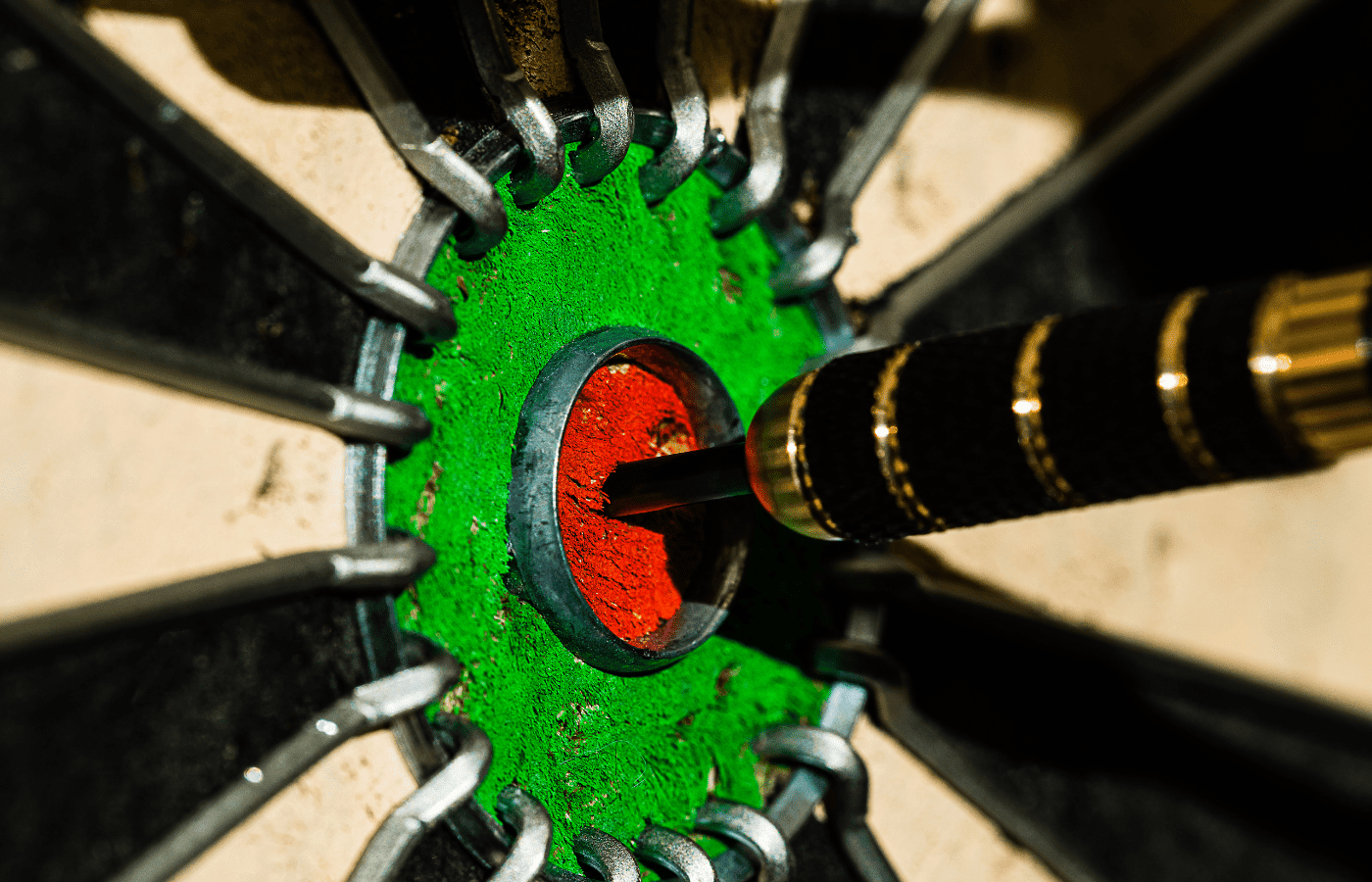 Dart throwing is more than just a fun way to kill time on the weekends. If taken seriously, it can be a very competitive sport.

A standard game of darts requires a dartboard and 3 darts to throw. The pointed tip of the dart will stick into the dartboard when it’s thrown at its target.

In order to stay on the dartboard without causing too much damage, the diameter of the dart tip needs to be a certain length. The maximum diameter of a dart tip is 3.45 mm.

What Are the Diameters of a Dart?

A dart tip is small but mighty. You don’t want to get in the way when they are flying towards the dartboard. The majority of darts are all 2ba, so they will have the same diameter:

These darts are the ones you will find at the pub, and also used for competitive throwing. There are two different types of dart tips, soft tip (plastic) and steel tip darts. Many competitive players prefer to use soft tip darts because they are more durable and throw faster. They always have better luck when they play with soft tips.

The tip is just one of four parts to the dart. It also has a shaft, barrel, and flight. The barrels are either smooth or ringed so the player can get a better grip. The flights, however, come in many different shapes and sizes giving the player more options.

Are All Dart Points the Same Diameter?

However, not all darts have the same diameter. The original make of darts was slightly bigger with a 1/4 inch diameter. Many players find that a larger diameter makes the dart less efficient.

The diameter of the tip isn’t the only thing that makes the dart efficient though. Its weight is another key factor. Most soft tip darts weigh between 15 and 20 grams, making them light enough for the perfect throw. Professional players prefer a dart that is around 20 grams. Steel tip darts may be a little heavier, some weighing up to 30 grams.

What Does 2ba Mean in Darts?

You keep seeing the term 2ba being used when it comes to darts, but what is it? Almost every dart that you use will be 2ba. The “ba” actually stands for British Association, a term that was once used in British manufacturing but is very rare to hear now.

The most common size of a soft tip is 2ba. These 2ba dart tips by Viper are some of the highest quality tips available on the market. They are extremely durable and also offer a hole to allow for a super tight fit as well as for easy removal.

Dart players nowadays will likely only use darts that are 2ba because they are much better quality to use. Many players noticed that their thinner design made for a better throw. They had a huge advantage using 2ba darts instead of the traditional way that darts were made.

When we mentioned above that 99.9 % of the darts used now are 2ba, that 0.01 % is for the people who still use brass darts. They have a 1/4 inch diameter and most players find that they don’t have nearly as nice of a throw to them. They’re bulky and more likely to cause damage to the dartboard.

2ba darts are safer and a better option to have on hand, especially if you have a dartboard at home. If a player accidentally misses the board they are likely to cause less damage than the old brass style darts. Modern dart players usually refuse to use any other kind.

What Size Is the Thread on a Dart?

Darts may come in different thread sizes, but there are two standard sizes that serious players stick to using.

This is the most popular choice for dart players. It can be used on 2ba darts and is a suitable choice for almost every dart. With a small 6 mm thread, a smaller barrel can be used. Most players think that they feel more sturdy in their hands and sit better on the dartboard after they’ve been thrown.

A lot of players find it easier to hit their target with the 6 mm thread because it allows for a more stable flight. With enough practice and effort, it’s easier for players to beat their high scores with these darts.

Players are less likely to see darts with 8 mm threads because these belong to the original style of darts. Since the barrels are much heavier most people prefer not to use them. It’s likely that players won’t find 8mm threads at a competition. However, you may come across some at an antique shop.

The lighter dart always takes the cake for better performance. Darts are always put through the test with heavy throws. The 6 mm has a much lighter barrel, allowing it to hit the dartboard with ease. Since the 8 mm has a heavier barrel it is more likely to cause damage to the dartboard’s bristol.

Players have an easier time hitting the target when they choose the more modern darts with 6 mm threads. The lighter throw allows them to practice their throwing technique more efficiently. Since these are the darts that are most likely going to be in a competition, it’s best for players to practice with 6 mm.

What Is the Diameter of a Dartboard?

Since we’re on the subject of diameters, many people are also wondering what the regulated size for a dartboard is. The Darts Regulation Authority has stated that a regulation dartboard should always be 17 and 3/4 inches round.

Each dartboard will be divided into 20 sections, similar in shape to pie slices, to determine how many points each hit is worth.

The cheaper models are a lot more common to find, especially at bars and pubs. In order to minimize damage on these boards, it’s best to use a 2ba dart because they have a smaller diameter.

Most dart players didn’t know that the diameter of the dart tip is such a crucial part of how it performs.

The more modern 2ba darts have a 3.45 mm diameter, making them the right size to stick to the dartboard without wrecking anything.

Players have better luck getting these darts to stay in place, and they also have a much better flight.