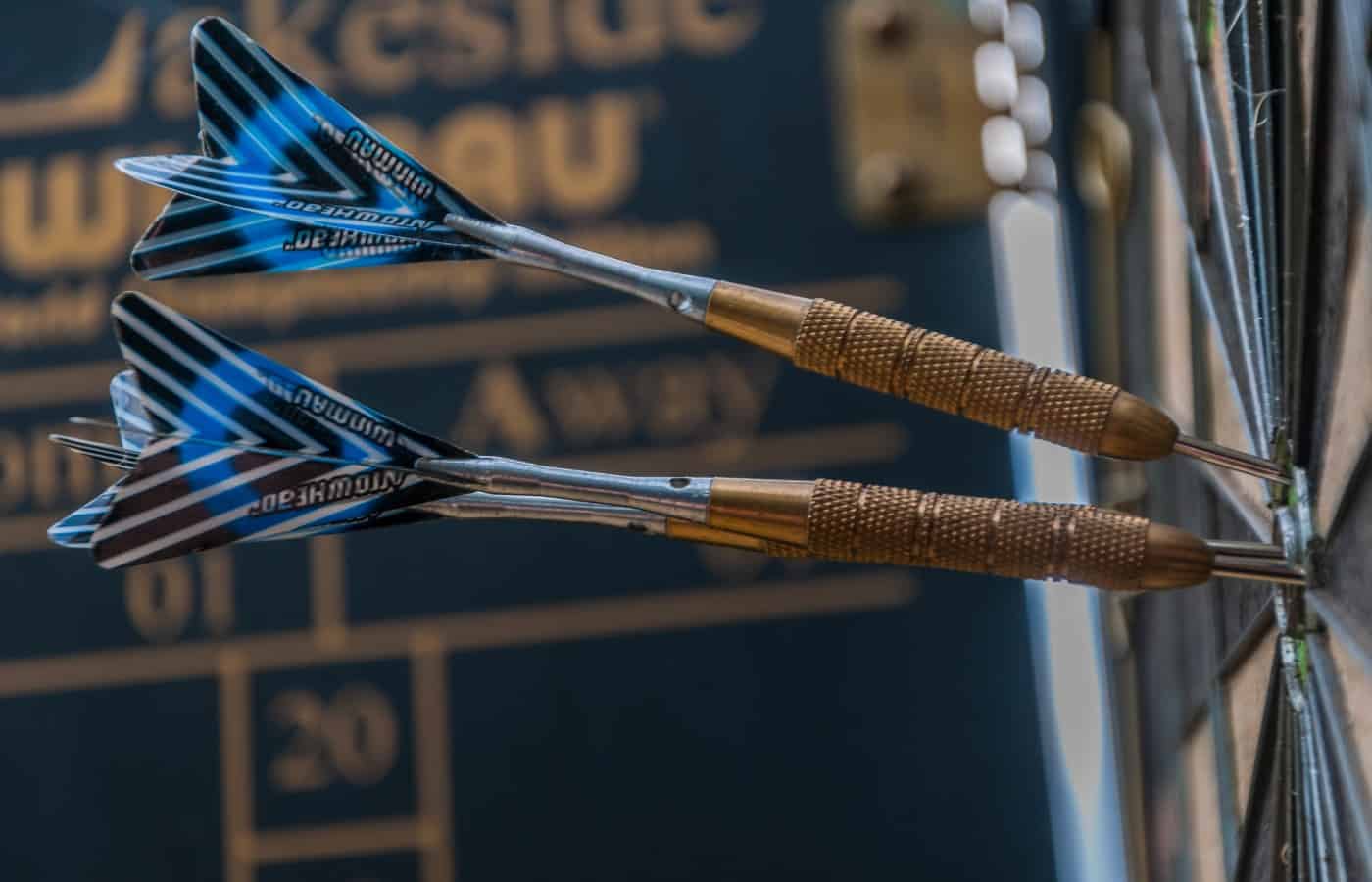 The tip of the dart is the part known as “the point” – so it is not a surprise that it needs to be pointed for the dart to work. This still leaves the question, why are dart tips pointed?

Dart tips are pointed to increases the aerodynamics of the dart’s shape (working with the rudder-like flight) to help it fly straighter. Alongside this benefit, pointed dart tips decrease the likelihood of a phenomena that darts players call “bounce back”.

Unsurprisingly, this is what happens when your dart strikes the dartboard at a strange angle, and then bounces back rather than sticking in the actual board. Some dart tips are also pointed because they are created to fit in “bristle” dart boards which is what we call normal dart boards. There are less pointed, duller tipped darts that are used on practice boards, but these pointy-tipped darts are designed to better fit in a proper bristle dart board.

What Are the Parts of a Dart?

A dart is made of four distinct elements, the point, the barrel, the shaft and the flight. Each of these work in tandem to assure that the dart flies straight and clean, and actually sticks into the board on impact.

The physics behind this interaction, and the reason that a properly pointed dart tip is essential to the dart’s functionality is simple.

Pressure is required for any object to penetrate another. The same principle applies for darts and dartboards – a larger pressure, or concentrated force, is required for the pointed dart tip to push itself into the board properly.

The mathematical equation for pressure is “force divided by an object’s area”, or “force/area”. In order to increase the pressure, the dart exerts onto the dartboard through its tip, you need to both increase the force and reduce the area.

Increasing the force is done through the strength of the throw, and the decreasing of a dart tip’s surface area can be done by making it as sharp and tapered and possible.

Do You Need to Sharpen Your Dart Points?

The short answer: yes. The long answer: yes, but in an awfully specific way. Ironically, there is such a thing as a dart point that is too pointy as well as to dull.

Firstly, you need to sharpen your dart points to avoid the bounce back phenomena described above. This happens when a blunted dart tip strikes the “spider”, or dividing metal outline, within a dart board and then simply bounces off.

How Sharp Should a Dart Be?

Furthermore, a blunted dart point will damage both the dartboard’s spider and its bristled surface. Blunt edges cause dents and marks in the spider and does even worse damage to the board itself.

A bristled dart board is made up of a huge number of “sisal fibers” connected to the backboard. When a properly sharpened dark strikes a dartboard, it does not actually “pierce” as much as its fine point nestles itself between the fibers, moving them out of the way as it hits the board. Removing the dart sets the fibers back to where they were.

A blunt dart point will not be able to fit itself between these fibers, and will instead flatten and crush these fibers, not allowing for the sisal fibers’ ability to heal itself to properly take place. So, a blunt dart point can permanently damage both your spider and dart board, as well as leading to more than a fair few losing streaks thanks to bounce backs.

How Do You Sharpen Dart Points?

As previously mentioned, a dart that is too sharp can also cause issues. It can also bounce back from the spider as the tip is not rounded enough to slide to either side of the metal division and can cause some permanent holes in your dart board.

There is a specific method of sharpening your dart tips to keep them pointy, but not too sharp. Use a cylindrical or bowl-shaped stone dart sharpener like this one from Amazon.

Insert the tip inside the sharpener, and use it in small, circular movements to sharpen and lightly round off the tip. Check the tip for burs and keep sharpening until smooth and lightly pointed.

Once a dart gets to the point where they can no longer be sharped, it is time to replace the dart tip altogether.

Dart tips are pointed to increase aerodynamics, decrease bounce outs, and help reduce the wear and tear on your dartboard.

It is important to inspect your dart tips regularly and perform maintenance as needed.. A dart tip that is not properly maintained can lead to decreased performance, excessive bounce outs, and can also damage the sisal fibres on your dartboard.

Use a dart sharpener to sharpen them, but be sure to leave a rounded tip. A slightly rounded tip will serve much better than a tip that is too pointed or too dull.