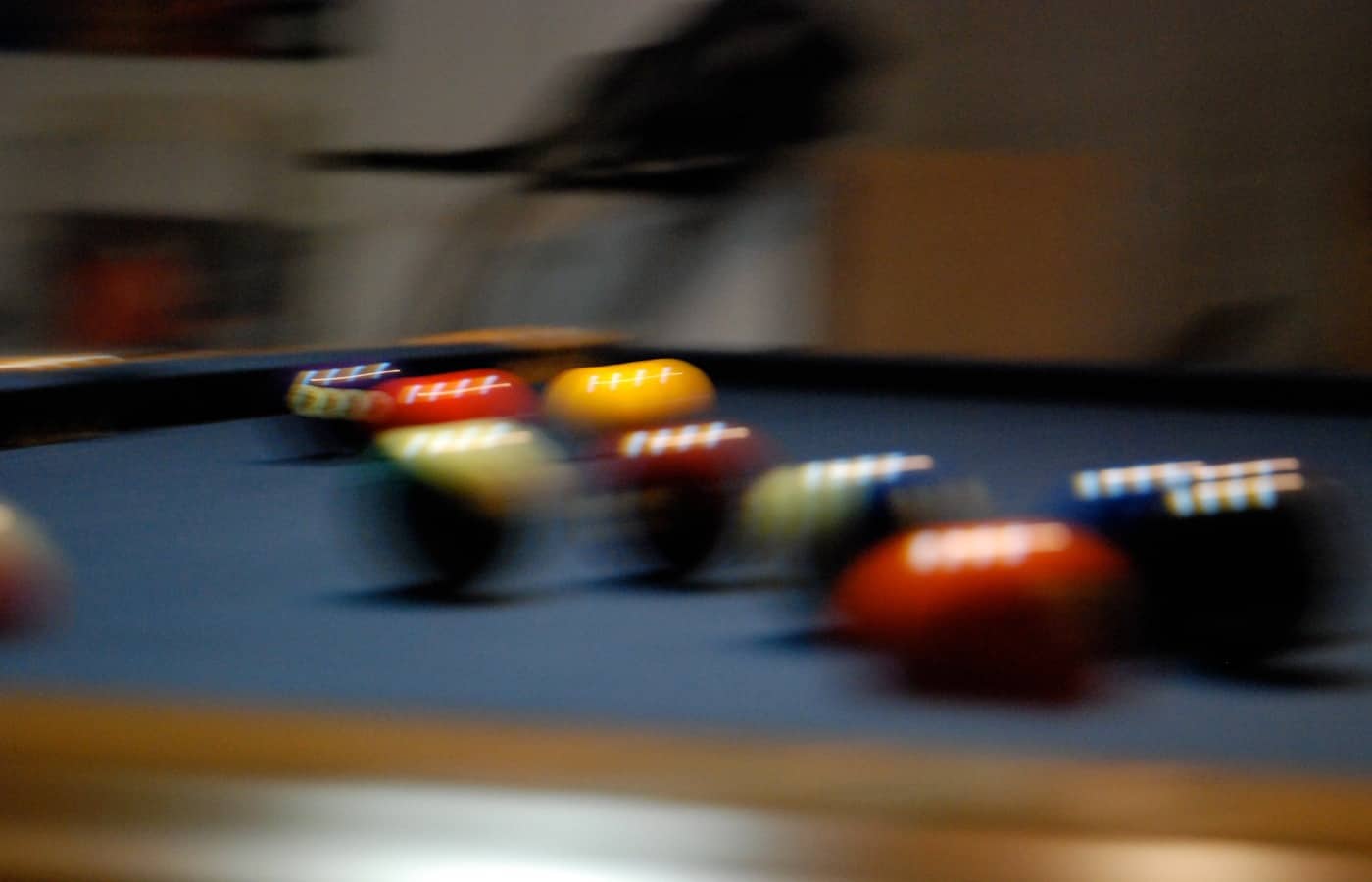 Billiards, better known as “pool,” is one of the most popular games in the world. At its base, the game of pool involves using a cue stick and up to 16 similar numbered ball around a wooden table covered with felt. Players use a cue stick to strike a bright white “cue ball” to, in turn, hit other numbered balls into the “pockets” that are arrayed in each corner and along the sides of the pool table. Have you ever wondered why pool balls all eventually come to a stop?

When pool balls hit each other or they bump into the table’s walls, there is always a change in speed (velocity) and/or a change in direction. When a ball’s speed changes, so does its momentum, which is known as its “impulse.” The shift in direction and loss of speed and momentum is what causes all pool balls to eventually come to a stop. The movement of the balls on a pool table is very closely tied to elementary physics.

The key to playing pool successfully comes with knowing how to control the movement of the white cue ball so that it puts the targeted ball into the specified pocket. That requires knowing what makes the balls on the table go where you want them, and when they may stop.

Why the Cue Ball Stops When it Hits Another Ball

The reason a cue ball on a standard pool table comes to a stop when it hits another ball head-on is a matter of basic physics. It is based on the law of physics called “conservation of momentum.” That law states that when two balls of the same mass collide, the ball that receives the hit will go off at the same speed as the ball that hit it.

This means that when the cue ball hits the ball you are shooting for, say the #7 ball, will take on the displaced momentum of the cue ball. When that happens, the cue ball loses its momentum and stops at the spot of the hit. That is how momentum is “conserved;” it is essentially transferred from the cue ball to the #7 ball.

What Happens During a Collision Between Balls?

In basic physics, the term, “collision” is used to describe the impact that happens when two or more moving objects strike each other. It’s helpful to know that there are two types of collisions that can result, and they depend greatly on conditions; elastic and inelastic collisions. The most relevant collisions related to playing pool are the inelastic collisions, such as when you use your cue stick to hit the cue ball.

What is an Inelastic Collision?

Instead, the energy contained in the cue stick after its collision with the white cue ball will not be the same as it will be after. That means the energy transfers into other types of energy. These type of energy can include light, sound, or heat energy. The change is so subtle, however, that you won’t see or feel the difference.

Before the collision, the player hits the white cue ball with a high rate of speed. Following the collision with the cue ball, the stick will stop moving. That will cause the momentum of the stick to transfer to the cue ball. In turn, that will force the cue ball to move forward, hopefully in the direction in which you aimed.

Why Does a Pool Ball Sometimes Stop on Its Own?

First of all, there is always air resistance facing a ball on a pool table, so that resistance will often cause a ball to come to a stop. However, even if there was no resistance coming from the surrounding air, however, each ball has to navigate the fibers of the felt on the pool table.

That means it has to push down and climb over each one of those felt fibers. As it does so, the ball a little bit of the kinetic energy, which refers to the energy in the ball that moves it in the direction you aim for. I

f you have ever tried to sink a pool ball, but had it fly off the table in the other direction, your only fault is not practicing enough. The more you practice hitting pool balls, the more you will get used to the movements the balls make.

Pools balls gradually lose momentum the more they hit other balls and the pool table’s walls due to the change in direction and speed. No matter what the collision is, momentum is always conserved and transferred to the next object.

The shift in direction and loss of speed and momentum is what causes all pool balls to eventually come to a stop.

Basic physics is applied while playing pool. Having a basic understanding of how physics works is a must if you want to take your game to the next level.