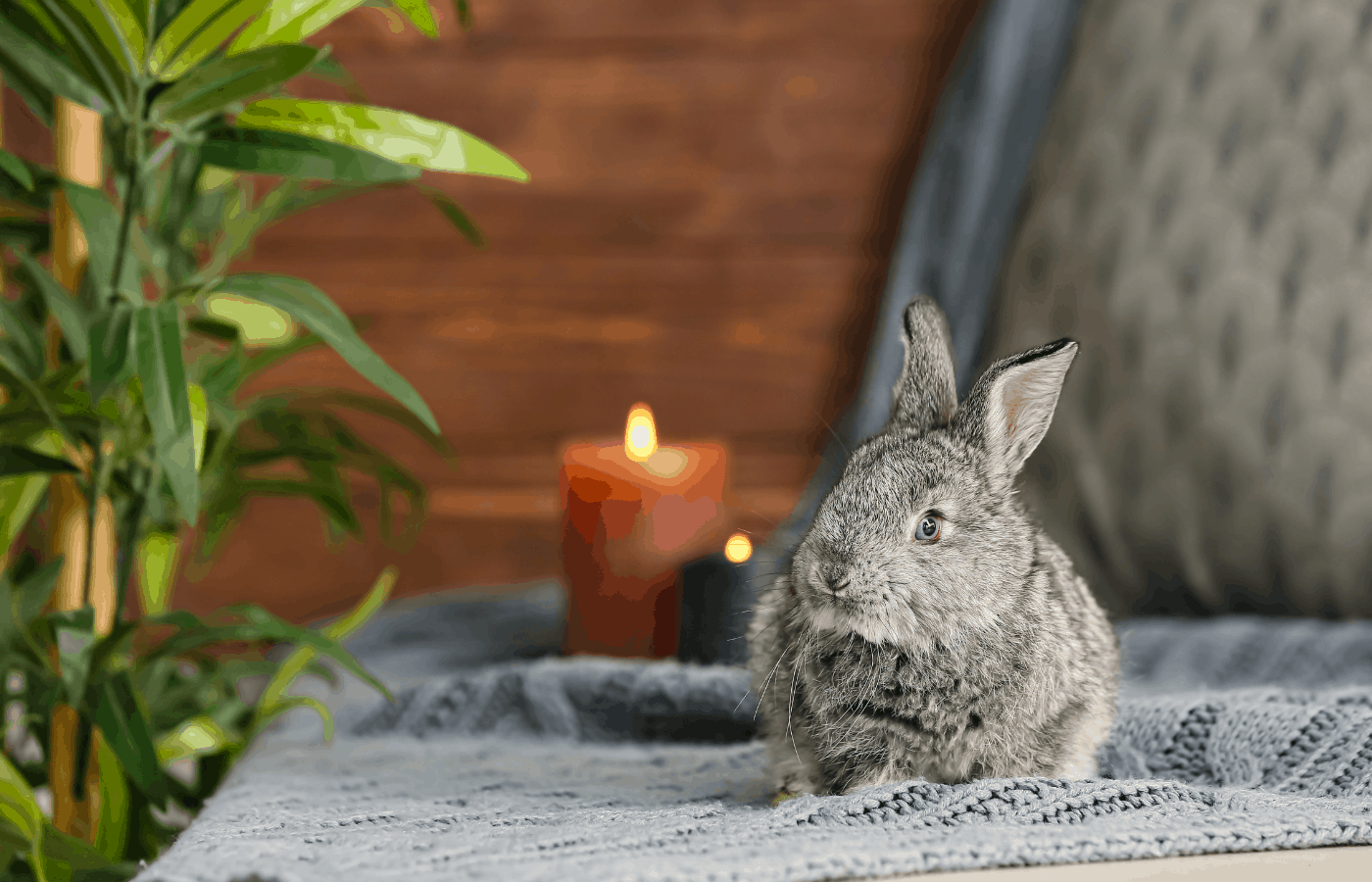 If you have a rabbit, you may have discovered that it occasionally chooses to eat candle wax. This might seem like a really weird thing to do, so let’s try and find out why on Earth rabbits would try to eat something that isn’t edible and shouldn’t smell appealing to them.

Rabbits may nibble on candles for a number of reasons. Firstly, they are curious creatures and often explore the world around them by tasting it, checking whether a new thing they have found could be a potential food source. Secondly, scented candles could well smell like delicious food to rabbits, which depend on their sense of smell to determine what to eat.

You might be surprised to find your rabbit munching on a candle, but a lot of people seem to have experienced this problem, so don’t be too stunned. It’s a good idea to move candles out of reach for your bunny if you can – since they probably won’t benefit from eating candle wax!

What Happens if My Rabbit Eats Wax?

Hopefully, even if your rabbit has eaten wax, it will be okay. The wax will be warmed by the rabbit’s body and will, with luck, simply pass through and be ejected in the rabbit’s droppings on the other end. The wax won’t be digested, as it isn’t food, so it should just come out the other end.

Sometimes, it will result in diarrhea and stomach upset for your bunny, since it has eaten something that isn’t good for it. At other times, you may not notice any effect, and the wax will just be ejected in normal droppings.

This is the best-case scenario. You don’t want the wax to stay inside your rabbit’s tummy or digestive system, as it could cause a blockage.

Rabbits are unable to vomit, so they can’t eject something that they have eaten if it doesn’t agree with them. If your rabbit has eaten a bit of candle wax, there’s nothing to be done but wait and see how it fares.

Keep an eye on your rabbit and observe its behavior. If it seems unbothered and continues to eat, drink, explore, and poop as normal, it is probably fine. After two or three days, you should be able to relax because the wax is likely to have come out by then.

However, if your rabbit seems off its food or it stops pooping, you will need to contact your vet quickly, as the rabbit probably has a blockage due to the wax. Immediate care will be needed in order to deal with that, and your rabbit might have to have surgery.

Obviously, this is something you will want to avoid, so you should keep wax candles away from your rabbits, out of reach on a high shelf if possible. Before letting your rabbit out to roam, always check what it might find to eat, and remove potentially harmful items that could be mistaken for food.

Are Scented Candles Bad for Rabbits?

Scented candles can contain all sorts of chemicals which aren’t good for your rabbit, even if you are just burning them. The smells will permeate the air and you need to remember that a rabbit’s sense of smell is stronger than a person’s, so this could be very uncomfortable and irritating. What smells good to you might not smell good to your bunny.

Candles with metal in them may also be bad for your pet, as they could release heavy metals into the air when burned. If consumed, heavily scented candles could be harmful because of the chemicals as well as the wax, so be even more careful, particularly as scented candles are more likely to attract your rabbit in the first place.

You can buy scented candles that are designed to be pet safe, which might be a great idea if you love candles and you have a rabbit. These should contain no nasty chemicals and will often be made with soy wax.

You should still keep these candles well out of reach of your bunny, or any other pets, however. While they may be pet safe, they aren’t designed for consumption, and could still cause problems if your rabbit decides to eat one. They might not be toxic, but the wax could block up your rabbit’s digestive system nonetheless.

To check the current price and availability of Scented Soy Candles, click here to view the selection on Amazon.

Are Wax Melts Safe for Rabbits?

Like candles, wax melts could be toxic to your rabbit, both when burned and when consumed. They may contain various chemicals, particularly if they are made of paraffin wax, which has toxins like formaldehyde, benzene, and acetaldehyde in it. It is not a good idea to burn this kind of wax melt around your rabbit.

These melts have been proven as dangerous even to people, as the chemicals released by burning could increase your risk of getting cancer. It is therefore best to choose carefully if you are going to burn wax melts, even if you don’t own a rabbit.

You shouldn’t let your rabbit eat wax melts, either. These scented waxes may appeal to your bunny, especially if they smell like food, so make sure that you keep them out of reach at all times!

Overall, candles, candle-like products, and wax melts aren’t great to have around your rabbit. The rabbit might eat them, or you may find that the chemicals within the candle irritate your rabbit’s sensitive nose. They could also do long-term damage, possibly causing cancer for you or your bunny.

It’s a good idea to keep candles and pets separate if you are a candle fan. If you want to use candles, burn them in a different room and open a window, or make sure you are choosing safe, soy wax candles so that the chemical output is reduced.

Keep all non-edibles off the floor in the room(s) where your rabbit is allowed to roam. Candy, unsuitable foods, candles, and anything else they might harm themselves on should be picked up and removed before you let your bunny out of its cage.