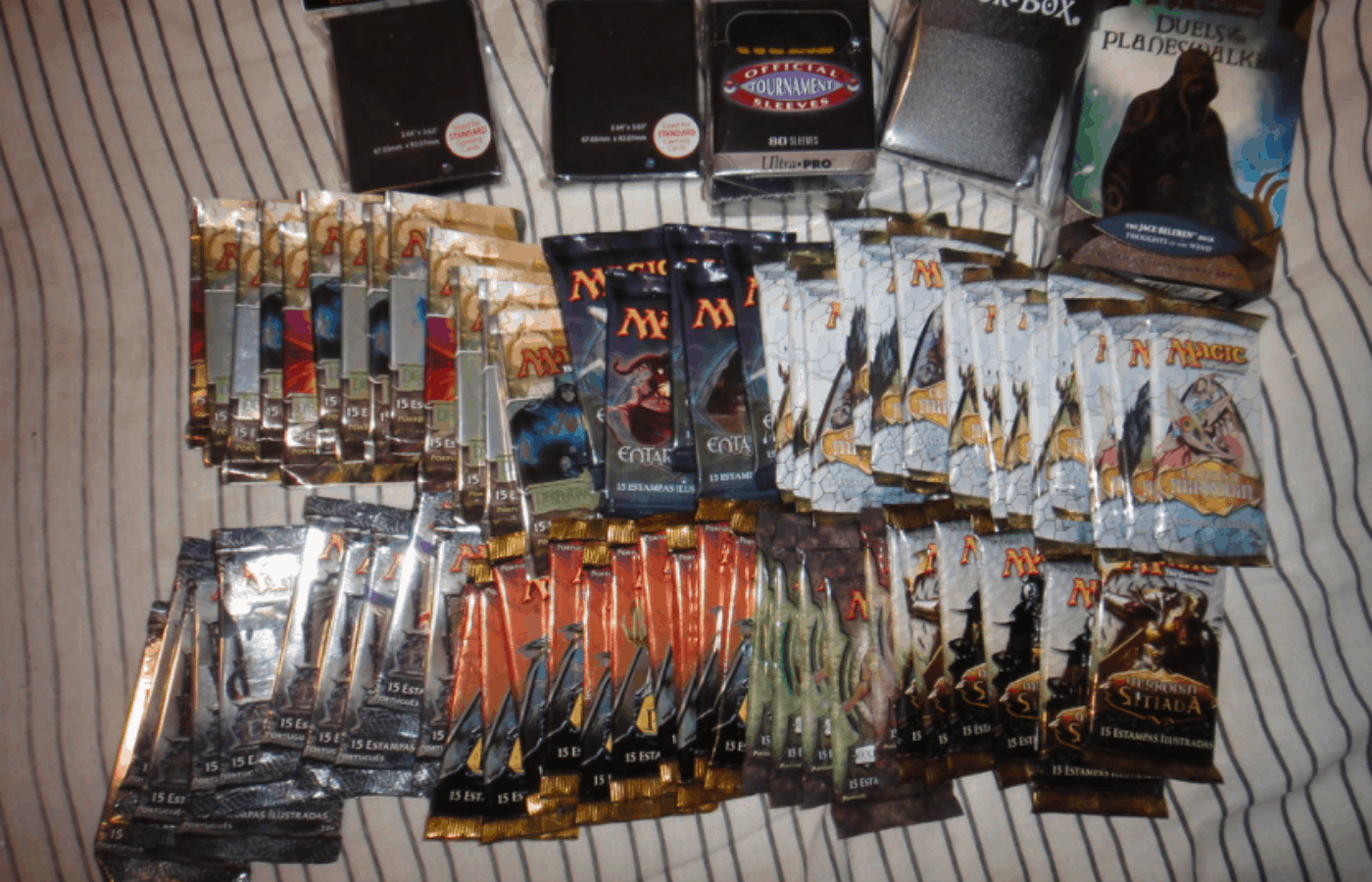 There’s no denying it. Magic the Gathering has gained a serious following over the years and more people are coming to the game daily. It’s only natural, then, to wonder… are MTG cards a good investment?

Magic the Gathering cards are a GREAT investment. You have limited edition cards, nostalgia, and a large following in over 70 countries that still play this 30-year-old game. Over the years, those rare cards will become even rarer and your collection will appreciate considerably.

Today we’re going to talk about why MTG cards and their expected growth as a viable investment. We’ll let you why we believe they will go up in value and which cards and packs we think will be a good investment. Let’s talk about the rising value of Magic the Gathering cards!

Do MTG Cards Increase in Value?

If you think that Magic the Gathering cards aren’t worth anything then we would point out the example of the Alpha Black Lotus card. Released in 1993, this rare card was highly sought after by collectors, appreciating in value to $18,000 by 2018 and today a near-mint Lotus is worth anywhere from $80,000 – $100,000!

Magic the Gathering cards do indeed hold value. This is because the creators have limited edition cards of which only so many are printed and released. Over the years, some of the rarest inevitably get chewed by the dog or rained on and then the remaining cards become even more valuable.

Furthermore, Magic the Gathering is played around the world, so people playing today are going to have fond memories of the game in 20 or 30 years and nostalgia greatly increases the price of already rare collectibles.

Which MTG Cards to Invest In?

This begs the questions, which MTG cards should one invest in? We have a couple of recommendations as to which cards we think are going to be sought after the most in the years to come. While there are many rare cardss, we’ve winnowed our list down to the ones below.

We mentioned the Alpha Black Lotus previously and the card collection that it belongs to is the Limited edition Alpha. The print run for this consists of 26,000 starter decks of 60 cards each as well as 70,000 boosters with 15 cards each.

This means there are 2.61 million cards from this run in existence and 1008 prints of Alpha Black Lotus. Cards from this should be a good investment in the years to come. Overall, it breaks down into the following categories:

If you are looking for what is decidedly a limited run, then the Reserved List cards are a good investment. There are cards from this run that are already worth more than $1000 and another reason why these are great collectibles is the controversy behind them.

When the Reserved List was released, it generated a bit of controversy, with some players absolutely loving the limited release and others hating these particular cards. That makes your ‘nostalgia factor’ jump wildly, because in 10 or 20 years Magic players or former Magic players will still remember arguing over them!

When you want collectibles that appreciate in value, always bank on nostalgia. If it is remembered, it’s going to have value.

The Beta release from Magic the Gathering is more common than the Alpha that we previously listed but we believe that they are still rare enough to be worth the investment. This 1993 run had an overall production of 7.8 million cards. Of this 7.8 million, 13,500 uncommon cards were printed and 3200 rare cards.

This is just an approximation, of course, but you get the idea. Beta came out at a time when Magic the Gathering was essentially at its peak. While it’s still popular, 1993 was a big year for the game, and the Beta cards have the distinction of being the last release with black-bordered cards.

Little facts like these make cards more valuable, so if you already own some rare or uncommon Beta cards, make sure that you are sleeving them and keep them as close to near-mint as possible. They are going to be worth something someday and you’ll be happy that you took care of them.

Should You Invest in Magic the Gathering Booster Boxes?

We’ve talked about general decks, but what about booster packs? Well, like standard packs, boosters give you a chance at uncommon and rare cards and so they can’t be overlooked. Some boosters are known to contain powerful cards and these will only grow in value over time.

Which Magic the Gathering Booster Boxes Are the Best to Invest In?

The booster boxes that you want to invest in (and keep sealed, because that mystery value is worth money) are going to be packs that get a reputation for hosting powerful, rare cards. Below we’ve got some recommendations for booster boxes that we think will appreciate in value over time.

While the Masters sets are reprints of some of the best cards that were produced, they still have a strong potential as an investment. Many of the cards in these sets are highly sought after and with the rarity of the originals, this is a second chance to get them.

That said, it is going to require a significant investment now. Considering that they are already increasing in value, we feel that it is safe to say in 10 or more years that this trend is certainly not going to lessen.

With so many players, any rare cards are going to be valuable if you take care of them and the inclusion of so many powerful cards make these boosters worth your investment.

Click here to check the current price and availability of the Iconic Master Booster Box on Amazon.

If you are looking to start collecting, a relatively inexpensive booster box that you can start with is the Return to Ravnica. These cards also hold the distinction of being largely playable by those who like the Commander mode of play. This helps the cards to stick out and thus helps to make them more valuable.

While the power set is a little lower on these cards, you’ve got the possibility of drawing shock lands and sought-after cards such as Supreme Verdict. Beyond this, they don’t have a lot of powerful draws so it’s easy to get started with this booster.

This is why we feel that Return to Ravnica is a good opening investment to start your collection to store away for future fun or to sell. You don’t have to spend a lot to start gathering up unopened booster boxes and the chance of drawing the shock lands means that there is going to be at least a modest value that comes with these cards over time.

With Magic collections, nostalgia isn’t the only factor, because people also enjoy the potential that comes with an unopened booster box and this is only going to appreciate over the years as less and less of a particular run are available.

Click here to check the current price and availability of the Return to Ravnica Booster Box on Amazon.

When it comes to booster boxes, one set that has gotten a lot of love is the Khans of Tarkir. Khans comes with a great chance of drawing Legendary creatures which may be employed with the Commander format. Wedge cards are also present in this run and many cards from this booster are played in tournaments to this day!

Due to its popularity, getting started in collecting Khans of Tarkir booster boxes is going to cost you a little more than other sets, but we feel that they are popular enough that you should get a hold of them now before their cost becomes completely prohibitive to beginning collectors.

Click here to check the current price and availability of the Kahns of Tarkir Booster Box on Amazon.

As you can see, trends have already shown that MTG cards are appreciating in value and it’s unlikely that this is going to simply stop. With such a large following around the world who are playing the game now and a finite number of rare cards and unopened packs, you’ve got a recipe for collectables that is undeniable.

Our advice? Invest now and protect your investment. Sleeve separate rare cards so that they will stand the test of time. Invest in unopened booster packs so that either you or a well-playing connector can enjoy the exciting of opening a new, rare pack once again.

Most of all, enjoy the rare pleasure of investing in something that you and so many others love. Who knows? In time you might simply decide to keep your collection but if you do sell it… you’re sure to fetch a pretty penny. Count on it!