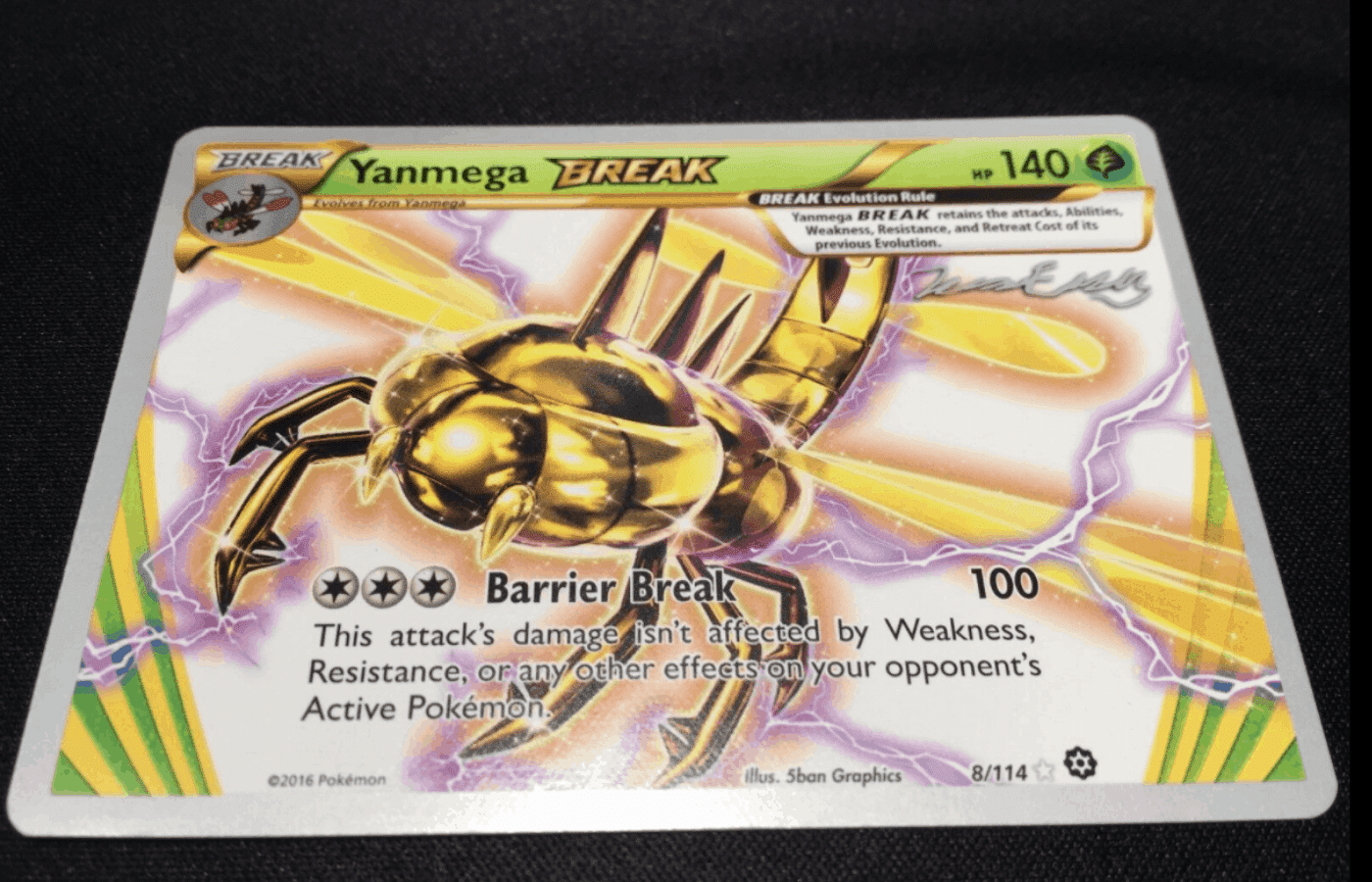 Pokemon BREAK cards were a series of cards that appeared in a few sets of the Pokemon Trading Card game. They have long since been discontinued, with no new cards being produced since Pokemon evolutions.

So, are Pokemon BREAK cards rare? The fact that they are classed as rare cards in the Pokemon TCG then yes, they are rare. In the sets that they appeared in, only a few BREAK cards existed. This means people were not exactly pulling them all of that often. However, they are not rare to the point where finding BREAK cards would be difficult.

On this page, we want to talk a little bit about BREAK cards and what they do. This way if you do stumble across a BREAK in an old set, you will know what the card does.

What Are Pokemon Break Cards?

Pokemon BREAK cards are special evolution cards. They were originally introduced in the set BREAKtthrough. However, they have appeared in a couple of sets since then. As we stated before, the last time these cards appeared in a set was Pokemon Evolutions.

No current sets feature Pokemon BREAK cards, and there are no BREAK cards that are regarded as standard legal. So, if you do have these cards, then you are only going to be able to play with them in the expanded format of the game.

Unlike standard evolution cards, BREAK cards are horizontal cards. When you draw them and evolve a Pokemon, they become the BREAK version of the card. The card is laid over the original card horizontally, and this creates a new card with slightly different powers.

Basically, they are just glorified evolution cards. In many cases, the BREAK cards allowed certain Pokemon to skip an evolutionary step. However, they are still just going to be your standard evolution cards, which is probably why they were not included in that many sets. Outside of being a gimmick, they offered nothing really exciting to the game.

One of the best parts of the BREAK cards, and probably one of the main reasons why people collect them nowadays, is due to the artwork. While the vast majority of your average Pokemon card will be hand drawn, most of the BREAK cards on the market were CGI cards.

They were also holographic. They looked absolutely stunning and they really helped to show the sheer power that each of these cards had.

As one final note here, we do want to point out that these are NOT evolution cards in the truest sense of the word i.e. you are not evolving a Pikachu into a Raichu using a BREAK.

Instead, with most of the cards, you are just making a Pokemon more powerful by adding an extra move and some HP. This means that BREAK cards can normally be evolved further later on, but that would remove the BREAK card from the game.

Yes. Pokemon BREAK cards are real. They are part of both the English language and Japanese language versions of the game. Although, they appeared in different sets for each variant of the game.

Most of the BREAK cards that you find out there in the wild nowadays are going to be real cards. They are not fakes. We don’t really think that these cards were important enough for people to fake. They were never especially rare, and they didn’t really have all that much power. They just existed. That is not to say that fake cards were not produced, but this was incredibly rare.

How Many Pokemon Break Cards Are There?

A total of 35 Pokemon BREAK cards were produced across these sets (these are the English names for the sets!):

Perhaps the rarest of these cards would be the XY Black Star Promos which couldn’t be gained from booster packs. The only way to gain them was from the various collector tins on the market during the XY era. However, because it was easy to know which promo card was included in each collector tin, and the fact that Pokemon sell a lot of tins, these cards are not especially rare.

They were also not going to be hugely powerful either. This is because the Pokemon Trading Card game producers didn’t want cards that could only be obtained as a promo to be the most powerful cards in the game. This would probably end up being ridiculously unfair for anybody that wouldn’t have been able to purchase a promo tin of their own.

What Is the Best Pokemon Card Break?

The best Pokemon BREAK card is going to be hugely dependent on the deck that a player is running. We will give you three of our highlights, though. This will give you a rough idea of how a BREAK card can actually work.

This bumps the Zorark up to a whopping 140hp. However, the real excitement here is the special move that it brings into the mix. The Zoroark BREAK card is able to replicate any move of the opposing Pokemon. You do not need the right energy cards to do this. This could, in theory, knock out the opposing Pokemon.

This reduces the opponent’s Pokemon to 10HP. It is a great way to make a standard Raticate a bit more exciting.

This does 160 damage to the opponent’s active program PLUS 30HP damage to one of the Pokemon sitting on their bench. it is immensely powerful.

Pokemon BREAK cards are not especially rare cards. Their real rarity comes from the fact that they were only included in a limited number of sets.

Pokemon BREAK cards are no longer active in the standard version of the game, which means that the value of them is a little bit lower than it was in the past.

That being said, Pokemon BREAK are collector’s items. So, if you do have some, try and keep them in good condition.