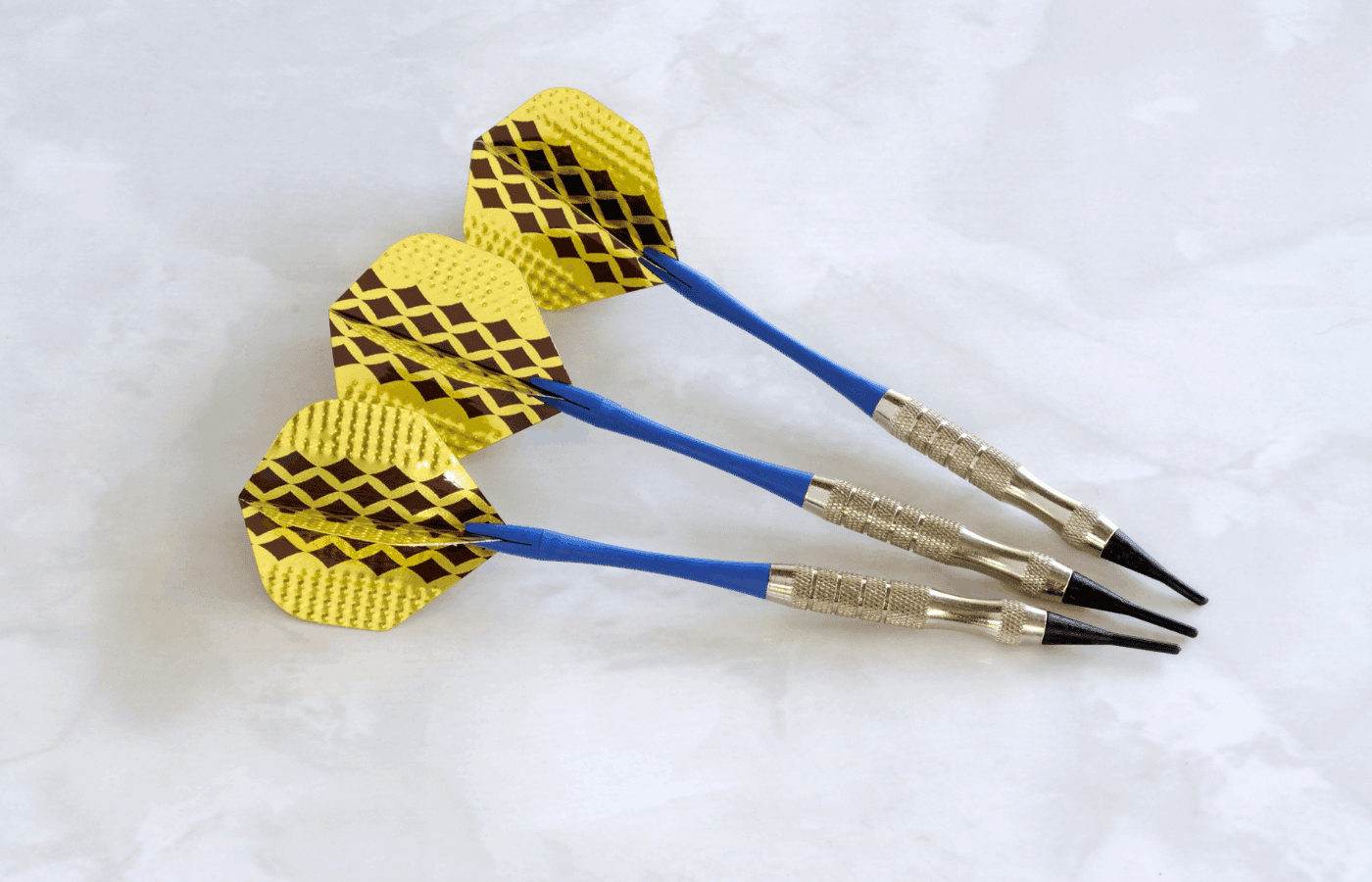 There are both steel-tipped and soft-tipped darts available on the market. The former is designed for standard dartboards, while the latter will be for electronic dartboards. You cannot mix and match the two tips. This means that some people will purchase two sets of darts. Do you have to do that, though?

While you cannot just throw a soft-tip dart at a standard dartboard, you can actually purchase conversion kits that will allow you to convert your soft-tipped dart into a steel-tipped dart.

While it won’t be as effective as a standard dart, it will, at least, allow you to have more ways to play with a single set of darts.

How to Install a Steel Tip on a Soft Tip Dart

Installing a steel tip on a soft tip dart should be fairly simple. You will need two things, though:

The conversion kit, as the name suggests, will convert your soft tip dart into a steel tip dart. It just screws onto the end of the dart shaft and you are done. Your soft tip dart has been converted!

The rubber o-ring isn’t necessary, but a lot of people do find it useful.

Not only is this a hassle, but it is going to be putting undue pressure on the thread. This, in turn, will mean that neither the conversion kit nor the dart will last as long.

We recommend using these steel tip conversion points by ACTION. These are a special set of tips that are used to convert 2ba plastic tips to steel tips and will work with most 2ba dart sets. This method is much more effective than using dart o-rings.

The purpose of the o-ring is to stop the dart’s conversion kit from untwisting when it hits the dartboard. You will still need to tighten things up a little bit on occasion, even with the o-ring. However, we can assure you that it won’t be anywhere near as often as you would have to without the o-ring!

Pros and Cons of Doing a Tip Conversion

There are only two things to discuss here. A single pro and a single con.

The main advantage is that you only need one set of darts. There are a lot of people that play with both a standard dartboard and an electronic dartboard. This means that they have to maintain two sets of darts. This can be costly and rather irritating.

When you have a conversion kit handy, whenever you want to play on a standard dartboard, you will just need to screw the conversion kit into place and you are ready to roll.

The downside is that you will be adding a bit of weight to your soft-tipped dart when you add the conversion kit. In the grand scheme of things, it isn’t going to be a small amount of weight either. On average, you will be adding 2oz to the weight of the dart. This means that it will be moving differently from what you are used to.

A dart with extra weight will require you to throw it a lot harder to reach the target. The flight path may also be slightly changed too. This is something that you will need to accommodate for.

Honestly, if you can maintain and pay for two separate sets of darts, then that is always going to be the preferable option. It means that you always have the right dart for the job. Converting a soft tip dart to a steel tip is a very budget-friendly option. It will be ideal for those that play the odd game here and there, not those that are playing the game multiple times per week.

What’s the Difference Between Steel Tip and Soft Tip Darts?

As the name suggests, soft tip darts have a soft tip. When you throw the dart at the dartboard, a series of small holes will grab onto the tip of the dart and hold it in place.

The situations where the darts are used will be completely different. Steel tip darts will be used with your standard dartboard i.e. one that has been made from fiber. Soft tip darts have been designed for plastic dartboards, often those that have electronics built into them.

The feel of the darts will be different too. While it isn’t always the case, soft-tip darts tend to be lighter than their steel counterparts. This means that they need to be launched with a greater force towards the dartboard.

The type of tip will also impact the balancing. Obviously, a steel tip dart will have a long bit of metal sticking out of the end of it. This means that there will be more weight at the top of this dart than a soft tip one. This means that the angle that it is thrown at will be slightly different.

Steel tip and soft tip darts were indeed made for different purposes. Soft tips were generally created for electronic dartboards while steel tips are for standard bristle dartboards.

The two most common ways to use steel tips on a soft tip dart is with either a steel tip point conversion kit, or using dart o-rings. O-rings tend to cause more issues than using a conversion kit.

With a conversion kit, you will easily be able to turn a soft-tip dart into a steel-tip dart. However, do bear in mind that the dart will play a little bit different from what you are used to. Therefore, you must practice with the new tipped darts before you head into competitive play.