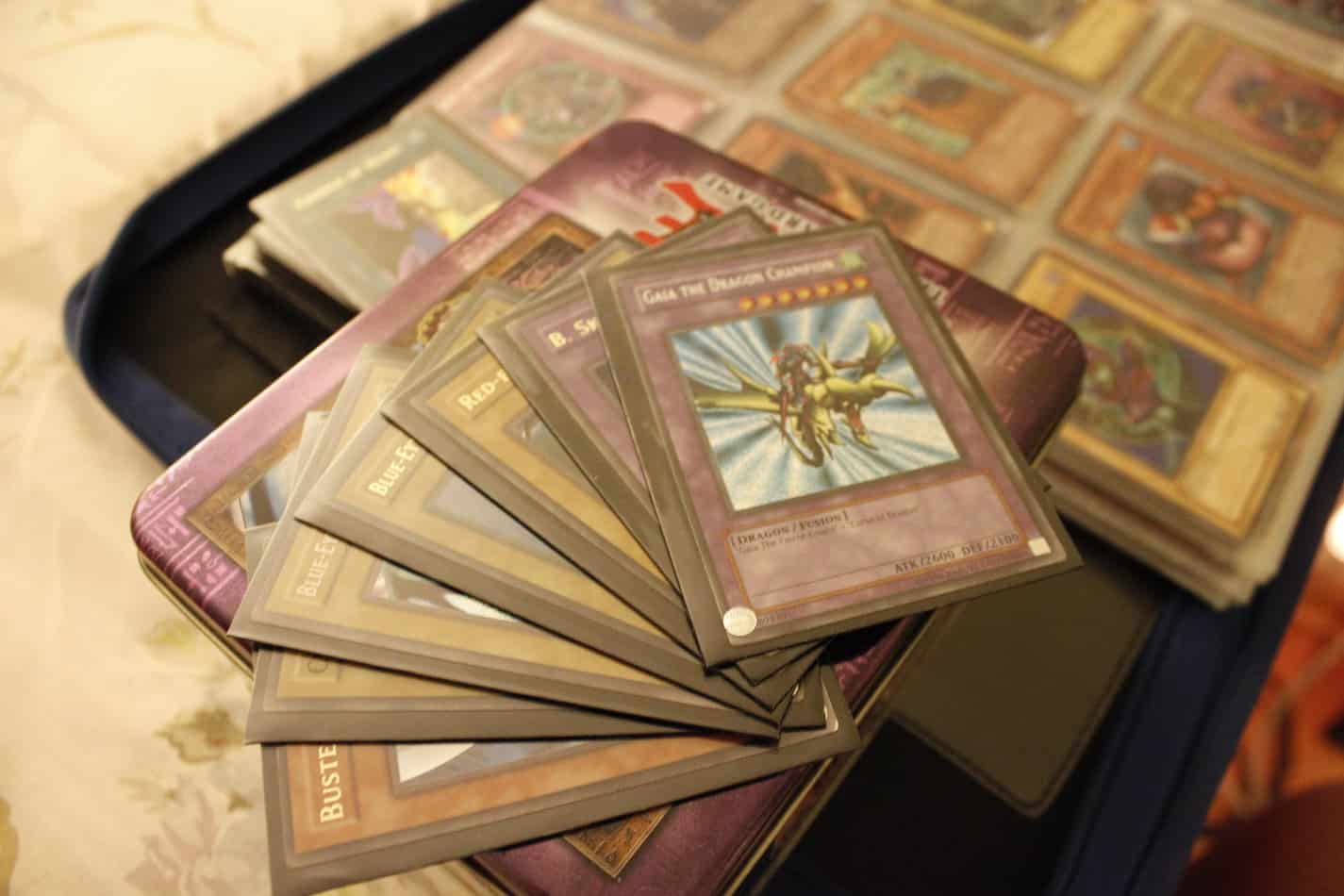 Yu-Gi-Oh has been one of the most popular trading card games in America since its launch in March 2002, and its fan base has been growing ever since. There have been thousands of cards produced since its beginning.

What makes certain Yu-Gi-Oh cards more expensive than others? There are a few factors that determine the price of a card. The cards rarity, popularity in the current meta, and the production or print time of a card all play a role in the daily fluctuations of card prices on the market.

Over time, new rarities of cards like ghost rares and starfoil rares have been added to the game that further drive up card prices as these cards are extremely rare. Original print cards from years ago are worth a ton of money due to the sheer fact that there are only so many of them still in mint condition.

The Yu-Gi-Oh Tournament scene also plays a huge role in card prices due to the current meta game. One day a card can be worth $5, and then 6 months down the line it can be $40 or more. Its a simple balance of supply and demand mixed with a little bit of flavor of the month. The more people that want a card will cause its price to rise.

What Yu-Gi-Oh Cards Are Worth Money?

There are a few factors that determine what Yu-Gi-Oh cards are worth money, and which ones aren’t.

Common, Rare, Super Rare, Ultra Rare, Ultimate Rare, Secret Rare, Ghost Rare, Starfoil Rare, and Mosaic Rare are the many card types that you will run into. With each card type will come different forms of artwork that make the rarities stand out from each other.

Commons and rares are generally not worth much at all. Once you start getting into the foil-cards like Secret Rares and Ghost rares, the money will start to add up.

Although the type of rarity of a card plays a role in the cards price, there are other properties that contribute more to the price of a card.

This is a simple supply and demand type of trait. If a card is popular, and it’s rare, there will be a significant price rise to follow. The deeper underlying factor that contributes to these types of price fluctuations is the competitive scene.

Players all over the world are always trying to create decks that will pummel the top decks in the current Meta Game. By using a mix of different card engines, high attack monsters, monsters with card effects, and powerful spell cards, people are always trying to find that one new winning deck.

Once a new deck structure becomes popular, prices of the core cards in that deck will rise in tandem.

These cards are in a class of their own. Their price isn’t necessarily dictated by their card rarity or usefulness in a tournament. These cards are worth a ton of money due to the sheer fact that they are rare with only a limited number of these cards in existence.

Classic, first edition cards from the original booster packs like Metal Raiders and Legend of Blue Eyes have very valuable cards in them since they are rare.

Cards that are won in tournaments and competitions are also worth a lot of money because they cannot be acquired anywhere else and are very limited production.

How Changes in the Competitive Meta Game Affect Card Prices

Most of the card price fluctuations are solely due to the current meta game in the tournament side of the game. The term meta game is a fancy way of stating the most popular decks being used at the moment for competitive play.

The Meta Game is largely based on decks that have a very high win rate among the other decks in the current “Meta” per say. This is always changing as players are always trying to figure out new ways to defeat certain deck types. When new deck archetypes are discovered, they start to become popular and in turn phase out the other decks.

This shift or change in the Meta Game will cause card prices to fluctuate across the market depending on the core cards that are needed to run the deck. It’s important to remember that just because a Secret Rare is harder to acquire than a Ultra Rare, in terms of pulling from a booster pack, an Ultra Rare can be worth more due to the sheer fact that it’s a core card in a current Meta Deck.

Strong monsters aren’t always the leading determining factor in most of these decks. The strategy and engine of how a deck works actually plays the most important role in creating a Meta changing deck.

There are many different prints of this card however, the one that is worth the most money came from a Shonen Jump Championship. The winners were this promo card and it is indicated with the code SJCS-EN004.

This is an iconic card in the Yu-Gi-Oh series as Kaiba, one of the shows main characters, had this card in one of his power decks and played it.

The next card on the list is Cyber-Stein. This card also has common variants that aren’t worth anything. This is another Promo card that was given to the winners of a Shonen Jump Championship. It has the unique code of SJC-EN001.

It is believed that only about 18 copies of this card exist which adds to its value. There are rumors that this card has sold privately for as much as $7,000.

This Promo card was awarded at the Yu-Gi-Oh! World Championship in 2009. There isn’t much information or details about this card other than most sources believe that there are only about 6 copies of this card that exist.

A few have shown their presence on eBay over the years and their prices closely reflect to what we listed it as.

This card made headlines just about everywhere in the Yu-Gi-Oh community. It was widely stated that on December 29th, 2007 that this card sold on eBay for over $1,000,000, making it the most expensive Yu-Gi-Oh card that’s ever been sold.

After many sources digging into this claim, it was actually proved to not be true. This card was awarded to the winners of the World Championship Series back in 2006. This card has actually had sales that were in the $8,000 range.

This Tournament Black Luster Soldier card is the most expensive card to date. This cards value is astronomically ahead of anything else on this list

It is truly a one-of-a-kind card. It was awarded back in 1999 during the Yu-Gi-Oh! Championship in Japan. This card was specially printed on stainless steel rather than the traditional card stock that standard cards are printed on.

The owner of this card has been reportedly asking for prices between $10 and $12 million for it. There are rumors that this card actually exchanged owners for around $2,000,000. No matter what the exact value that this card has sold for, this card remains undefeated for being the most valuable Yu-Gi-Oh card of all time.

Card rarity, popularity in tournaments, and promotional cards are the determining factors on why certain Yu-Gi-Oh cards can be so expensive.

Shifts in the Meta Game are also notorious for the quick rising and tanking in card prices. If you are a collector, it’s best to sell your duplicate cards when the prices are at their highest if it’s a Meta card due to the fact that it may never get to that price ever again.

The most expensive Yu-Gi-Oh cards on the market are the Promotional cards that are given out to winners at Yu-Gi-Oh tournaments and championships. These cards are very limited in quantity and are widely sought after by many different collectors around the world.