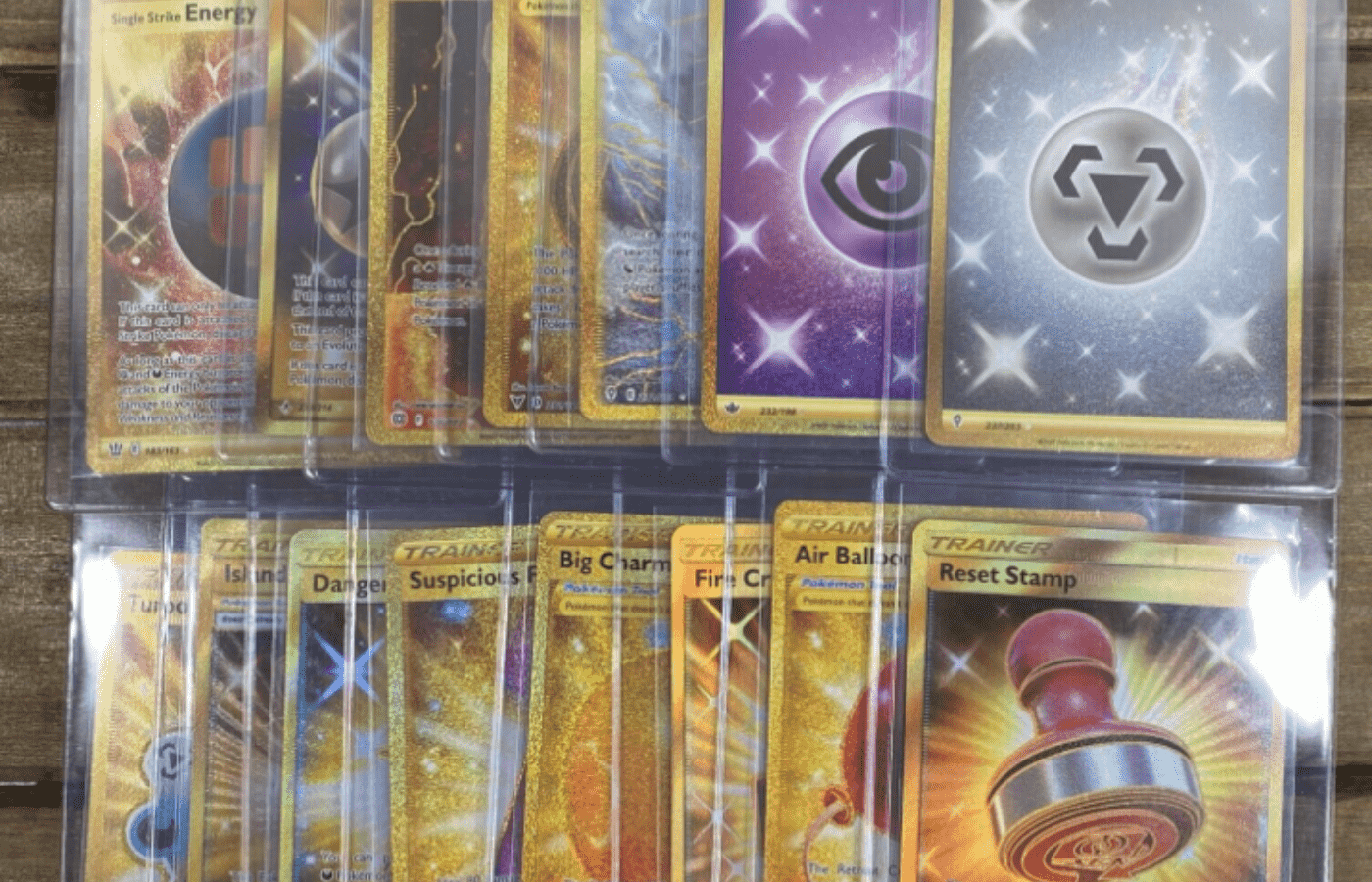 You could open up booster packs from the sets that include the gold Pokemon cards you want. However, that could take an exceedingly long time. Your best bet is to try and pick them up on the secondary market, although do bear in mind that these cards will not be cheap.

Let’s talk about these gold Pokemon cards in more depth. This way, you will know where you will be able to track them down.

How to Get Gold Pokemon Cards

Over the years, Pokemon has released gold cards in various sets. Not every set will have them, though (we will discuss the sets in a short while).

If you love to take risks, you can pick up booster packs for the sets that you are interested in. You can look up setlists online and see which ones contain gold Pokemon cards.

The easiest way to get your hands on gold Pokemon cards is to buy them on the secondary market. Because the cards are exceedingly rare, they will not be cheap, particularly if you want something like a gold Charizard. Sadly, these cards are not going to go up for sale all that often.

Of course, you could always go down the route of actually trading some of your own Pokemon cards for a gold Pokemon card. However, let’s be honest, very few people are actually carrying out trades nowadays. It is all about spending money to get the cards that you want.

What Are the Chances of Getting a Gold Pokemon Card?

It depends on the set and the card that you are looking to pull.

There are some sets where you could open dozens and dozens of booster packs and not see a single gold card. There are other sets (namely the Sun ; Moon block) where it seemed as if you were drawing a gold card every couple of packs.

No matter the case, gold Pokemon cards are always going to be among the rarest of cards in any Pokemon set. The chances of pulling them will be much lower than pulling any other card in a set. This is why it is so important that if you are interested in a particular Pokemon card, you actually go out there and spend your money on it.

No matter how expensive a card is on the secondary market, it is always going to work out a whole lot cheaper than if you were opening booster pack after booster pack of cards. After all, you could pull them card on the first booster or you could open 100s and get nothing!

What Pokemon Set Has Gold Cards?

The very first gold Pokemon card made an appearance in the Boundaries Crossed expansion pack.

Some of the most sought-after gold Pokemon cards actually come from the Legendary Treasures set. It was here, we saw the first gold Pokemon introduced to the game. These cards were absolutely beautiful and, even now, people are looking to pick up the Zekrom and Reshiram cards.

The latter part of the XY Pokemon card block is when the Pokemon gold cards really started to take off. This happened in Roaring Skies and Ancient Origins. This is back when Pokemon gold cards were on the cusp of still being rare.

Once you start getting into the Sun ; Moon expansions, as well as the Sword ; Shield expansions, there are gold Pokemon cards all over the place.

Each of the sets released in these blocks contained a good number of gold cards, which means that if you really wanted to get your hands on one, you could probably find one or two gold cards per booster box.

Finally, you have the Celebrations Ultra Premium Collection. These contain some of the rarest gold cards in the game. This includes a reproduction of the Pikachu and Charizard from the original base set in Gold. People have absolutely fallen in love with these cards, and you can find them sold for massive prices on the secondary market.

It depends on the card and the set that you are looking to pull the golden Pokemon card from.

Do bear in mind that even with the sets that have a huge number of gold cards in, pulling one is still going to take a little bit. You may get one or two per box from the Sun ; Moon and Sword ; Shield expansion blocks.

If you go to the gold cards from sets before this, then you may only find a gold card in every few booster boxes. They aren’t going to be tricky to track down at all. Of course, this is all based around pulling the cards from a booster pack. If you wanted to buy the cards on the secondary market, then that is going to be easy.

A lot of people have drawn these cards before and because they have little value outside of being for collectors, they are put up for sale fairly often. This means that you shouldn’t have too many issues tracking down the card that you want.

There are two ways to get gold Pokemon cards. The first is to pull them from a booster pack, and the second is to buy them from the secondary market.

If you want to stand the strongest chance of pulling from a booster pack, then opt for any set from the Sun ; Moon or Sword ; Shield sets, with the latter having more gold cards.

If you are lucky enough to pull a gold card, make sure that you sleeve it up quickly. These cards will have value in the future.