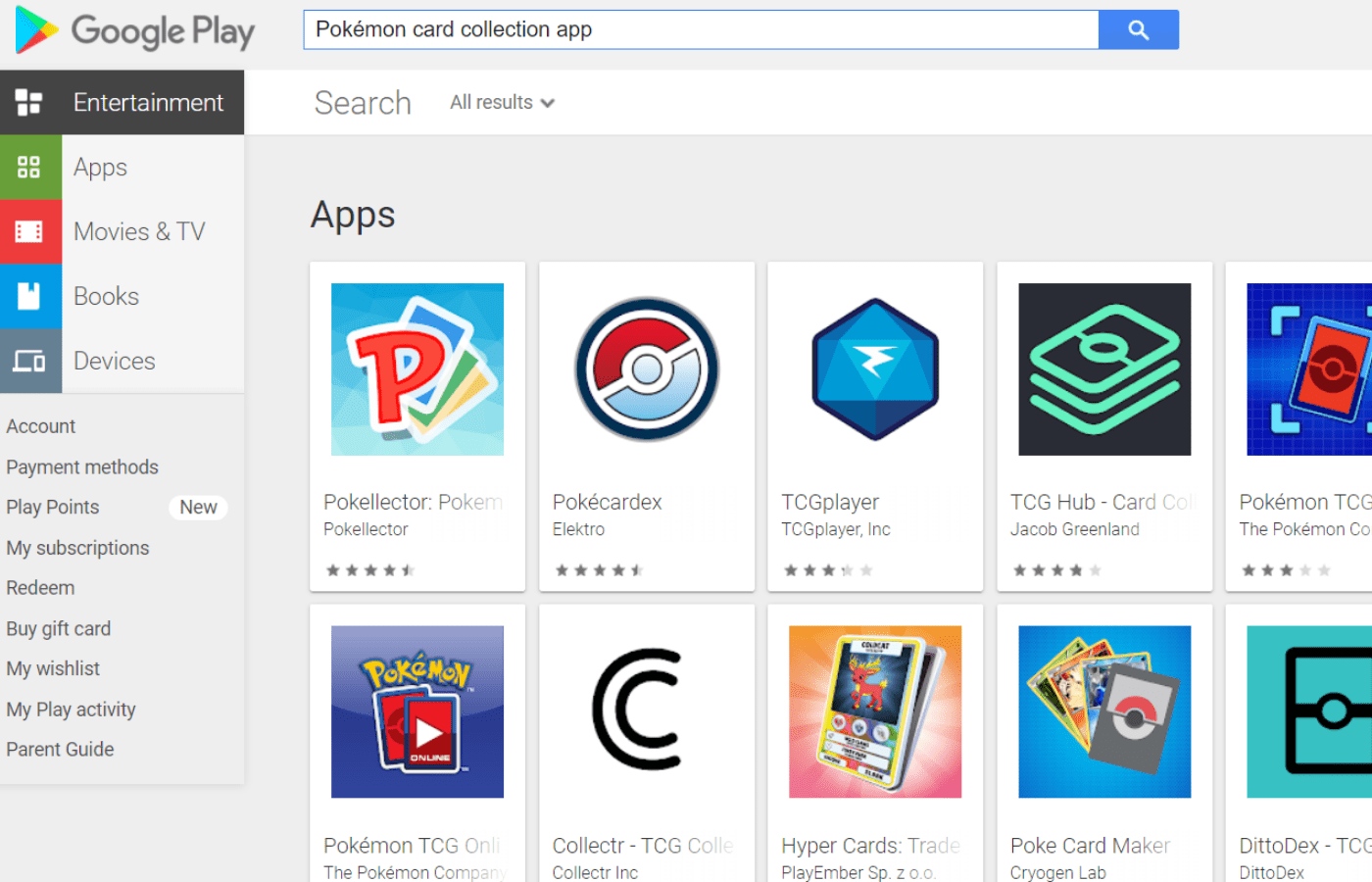 Some of the best apps for Pokémon card collection include Pokemon TCG Card Dex, Pokécardex, Collector, TCGplayer, and TCG Hub. Each of these apps has its own quirks that separates them from the rest.

Out of these 5 apps, Pokemon TCG Card Dex is the only official one but has lesser positive reviews as compared to unofficial apps such as Pokecardex and TCGplayer. These apps usually have scanners to scan physical cards and add them to your collection, others like Pokecardex allow you to download scans.

The rest of the article will cover the various pros and cons of each apps to give you a better idea of what app is best suitable for your Pokemon card collection.

It can be a bit of a hassle to keep all of your Pokemon cards catalogued manually, but this is made easy with Pokemon card collection apps that you can use to keep a digital collection for all your cards.

These apps not only let you organize your pre-existing cards, but also have features letting you find and shop for more cards to complete a collection. Some apps are only compatible with English cards but there are others which support cards in other languages too.

Figuring out which app is best for you comes down to experimenting with each and knowing which functions the most seamlessly on your device. Each app provides a different interface so it’s good to try out several apps at first and then decide which suits your needs best.

The official app designed by The Pokemon Company International, Pokemon TCG Card Dex is downloadable on iPhone, iPad and Android devices for free. It’s an effective app for organizing your cards in an ever-growing TCG database and also setting goals regarding which collections you want to build next.

One of the best features of this app is that after scanning a particular card and adding it to your collection, it lets you know which cards you still need to complete your collection. Scanning a card works by simply using your device’s camera.

You can search your desired card easily on the app by using filters related to card type, energy type, weakness etc. The app supports several languages such as English, French, Italian, German, and Portuguese.

The best feature of this app is the translator which automatically translates a physical card in a foreign language to the language you’ve selected for the app.

Some of the cons include the lack of accuracy of the scanner feature as it works well only on a good and clear background. Moreover, only cards starting from the Sun and Moon sets are compatible with this app. In the future though, there may be a possibility for the users being able to add older sets.

Pokecardex, available for Android, is one of the most popular unofficial Pokemon card collection apps. The database boasts for over 15,000 cards belonging to as much as 160 expansions, and provides users the option to design a Japanese catalogue, with about 14,000 cards and 170 expansions.

One of the best features of Pokecardex is that it is very easy to keep all your collections secure since you can create an account and backup your card collections so you never lost them.

It’s usable both online and offline and provides you multiple interface options to experiment with. The pro version of the app has a Wishlist feature so you can set goals regarding which cards you want to collect next.

Some of the negative reviews on Pokecardex say that although the app boasts a large inventory, some rare cards and sets are unavailable. Also, unlike other apps, there is no scanner option available to quickly add cards to your collection.

There are some language issues as well as. While the rest of the app is in English, the name of a set is shown in French and there is no option to change it.

Next on the list, Collector is a well-received TCG app with a 4.1 rating on the Apple app store. It has a very large database ranging from Fossil up to the latest expansions. Apart from adding your card collections, you also have the option to import and export them so that you can share them with other users.

The app automatically displays the HP, attacks, evolutions and other stats when you simply click on a card to open it up. It even lets you know the lowest price of a certain card that you can purchase from Amazon or eBay.

Like Pokecardex, it also has a Wishlist feature so you can keep a record of which cards you wish to own in the future.

There’s also a Deck Manager that you can use not only on the app, but also email it to yourself for using in leagues and tournaments.

Collector boasts some of the best features out of all Pokemon TCG apps but is not without its flaws. The interface is known to be glitchy at times which spoils the user experience.

Also, there is a lack of certain simple features such as being able to select multiple cards at once to delete them. You have to select one by one which is time-consuming.

Pokellector also has a very decent database including expansions such as Sun and Moon, Sword and Shield, Black and White, and so on. It gives you detailed prices for cards and also has a scanner for scanning and emailing PTCGO QR codes. Like other apps, it also has a My Collection feature to keep all your decks in one place.

One of the major cons of Pokellector is that it lacks a Wishlist feature. You do have the QR scanner if you want to look up a card and purchase it, but you can’t keep the cards you wish to own in a separate folder or record. Also, some reviews complain that the card prices on the app can be inaccurate sometimes.

TCGplayer is not only an app that lets you organize a card collection – it also boasts the feature of letting the users find prices for their cards so that other people can purchase from them. The app is compatible with not just Pokemon but other TCG franchises too such as Yu-Gi-Oh! and Magic.

You can scan your cards and know their prices based on their condition, language and other aspects. Even if it’s in a foreign language, the app will still be able to scan the card and let the user know its price. You also have a very efficient option of being able to scan several cards at once.

Like other apps with the scanner feature, the main issue lies in the lack of accuracy in the scanner. Its accuracy is heavily dependent on whether you’re scanning your cards under the right background or not.

All 5 apps we’ve mentioned in this article are effective in their own way, but Collector and Pokellector are the most recommendable as they have the most amount of features and an efficient interface.

TCGplayer is what you might want to go for if you also want to sell your cards apart from just collecting them.

Lastly, Pokemon TCG Card Dex is a good option if you mostly have cards of the Sun and Moon sets and beyond.