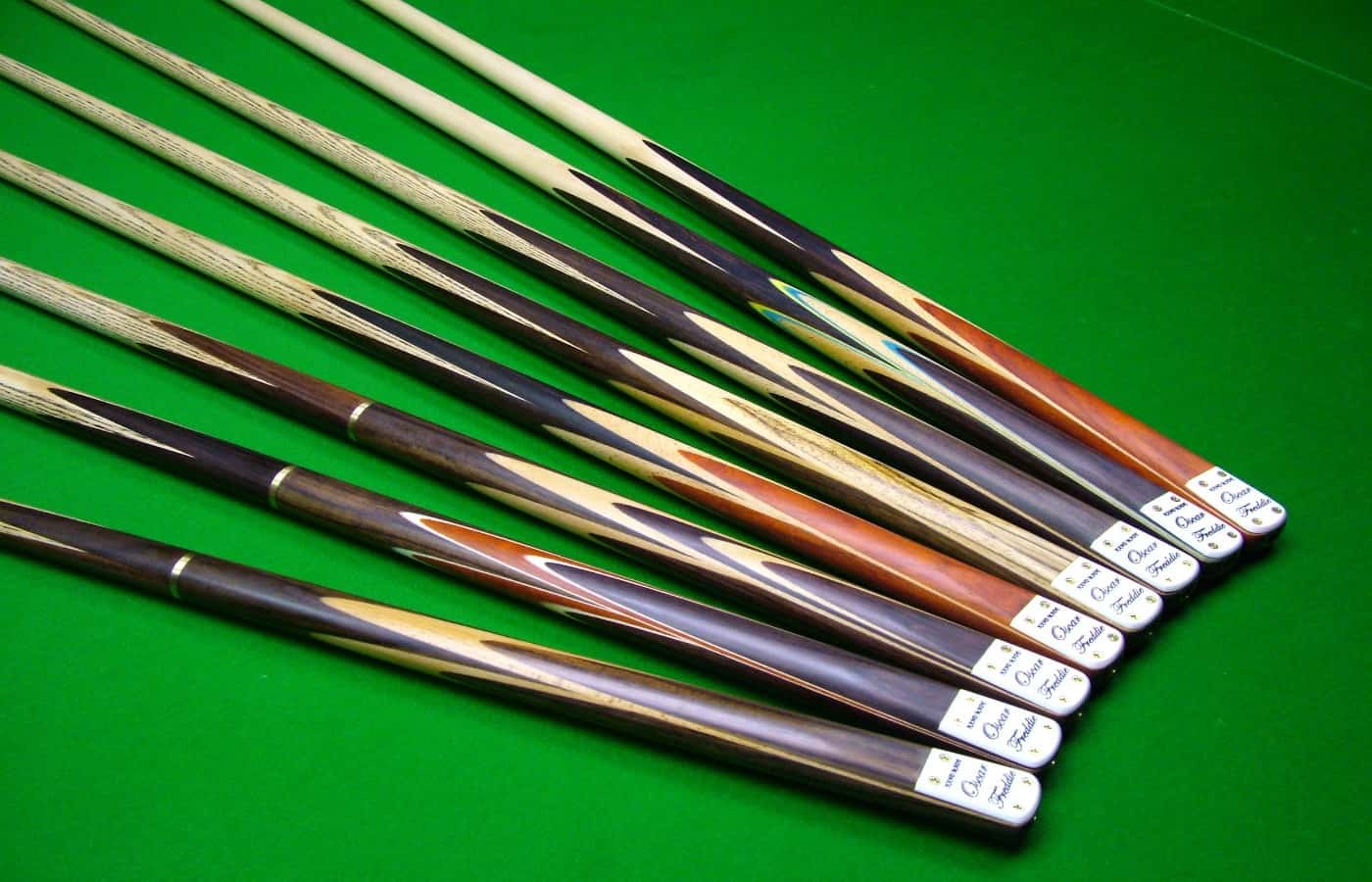 Since snooker balls are smaller and lighter than billiard balls, it doesn’t require as much force to hit the ball. Ash is a very lightweight but dense wood, which means that it can stand up to regular use as a cue, but won’t drive the balls off the table.

What Are the Best Snooker Cues Made From?

The majority of snooker cues are made of ash or maple. In the competitive scene, the general preference for most players is a cue made of ash. It’s safe to say that the best cues are made out of ash since it is the most widely used type of cue.

If you are looking for a great cue stick made of ash that is a great option when on a budget, then this Mark Richard ash cue stick is a great choice. Many players say this cue is a very good cue even though it’s not as expensive as a luxury high end cue.

Why Is Ash the Best Choice for a Snooker Cue?

Ash is not just a lightweight but dense wood it is also a wood that has some “give” to it. This flex in the wood makes it easier for the player to spin the ball while playing.

Ash also has lower deflection on the ball compared to other woods.

Why Is There a Difference Between Snooker Cues and Billiard Cues?

Snooker cues and billiard cues are made from different materials because there is a difference between the balls used in each game.

Billiard balls are larger and heavier than snooker balls, so it makes sense that the cues are made from woods of different densities.

What Are Billiard Cues Made From?

In comparison to ash snooker cues, billiard cues are most often made from maple wood. Maple is a denser and heavier wood than ash.

Like the snooker cue, the billiard cue can stand up to regular use because it is dense, but it also needs to be heavier to hit the larger billiard balls.

The average billiard cue weighs between nineteen and twenty-one ounces. A difference of one ounce may not seem like much, but it has a significant impact in the games of snooker and billiards.

The average billiard ball weighs six ounces and is two and a half inches in diameter.

Similarities and Differences Between Snooker and Billiard Cues

There are quite a few other differences and similarities between snooker cues and billiard cues in addition to just the cue material and cue weight.

The Tip of the Cue

The tip of the snooker and billiard cues are also different sizes.

The difference in the size and weight of the ball used in each game is what determined the size of the cue tip.

Material of the Cue

Another big difference between these two billiard cues is the cost of each. The shorter, lighter-weight English billiard cue is the cheaper of the two starting at $50. The longer, heavier American billiard cue, however, usually begins at $100.

The main reason that snooker cues are made of ash is because snooker balls are smaller and lighter than standard billiard balls which makes a lighter cue stick more favorable.

The lighter wood helps prevent the balls from being driven over the table as opposed to using a heavier billiard cue stick.

Although snooker cues are mostly made of either ash or maple, ash seems like the go-to choice by the professionals. It’s very lightweight, but dense at the same time, and has a great feel to it.