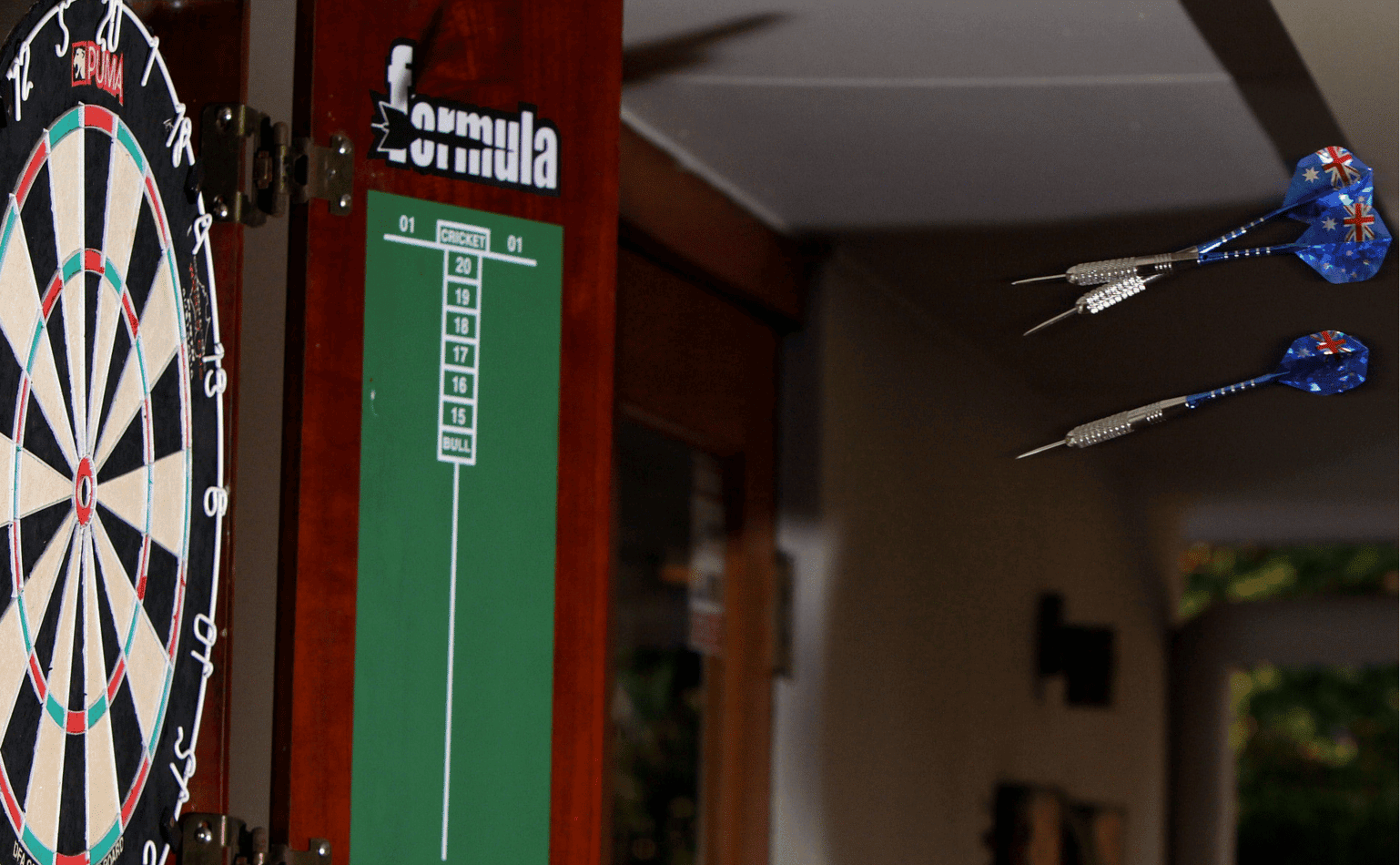 Knowing how to properly throw a dart straight can be the difference between your dart landing on your desired target or bouncing out. There is a lot of preparation that goes into the proper dart throw. Your choice of darts, your stance, and the way you throw all play a big role in how your dart flies through the air.

Since their are so many variables to a dart wobbling in the air, you may be left wondering what can be causing it. Why do my darts wobble when I throw them? The reason your darts wobble when you throw them is because you either don’t have a proper foot stance, or you are not releasing your dart properly.

These two reasons alone will cause your darts to wobble in the air instead of them flying straight or with a slight curve onto the dartboard. A dart wobbling in the air isn’t the only problem that can occur with an improper throw.

Darts landing on the dartboard sideways, increased bounce outs, and a low success rate of hitting your desired target are all negative side effects of an improper throw or darting stance.

Why Do My Darts Go in Sideways?

There are two main factors that contribute to a dart going in sideways or slanted. Not holding your dart in the correct center of gravity for your dart type is one underlying factor.

The second underlying factor to a dart landing sideways is by not releasing your dart at the proper time.

Know Your Darts Center of Gravity

There are many different types of darts on the market. There are front weighted, rear weighted, and center weighted. All of these darts have barrels that vary in weight. These varying weights focus on one side of the dart more than the other.

Phil Taylor is regarded by many as the best darts player of all time. Phil mainly uses a front weighted dart and even has a lineup of darts called the Power 9Five by Target Darts. These Generation 2 Power 9Five steel tip darts are a game changer if you prefer gripping your darts towards the front of the barrel.

A rear weighted dart is the exact opposite of a front weighted dart. Most of the darts weight is in the rear. If you throw this dart while holding it too far in the front, your dart may land pointing downwards. Find a good center of balance towards the rear of this type of dart before throwing.

A center weighted or evenly weighted dart is more forgiving as there is no extreme amount of weight on either end of the barrel. These are the best types of darts to start out with as a beginner. Many professionals use center weighted darts so don’t think you can’t be good if you aren’t using a front or rear weighted dart.

Know When to Release Your Dart

Releasing your dart at the right time also plays a major aspect in a straight dart. Release your dart too soon and it may land on the dartboard pointing downwards. Release it too late and it may be pointing upwards.

How Do I Keep My Darts Straight?

In order to keep your darts straight while throwing them, you will need to make sure your stance, posture, and throw are correct.

Keep your leading foot pointing forward behind the oche while your other foot is parallel with it. Your leading foot should bare about 70% of your total weight when throwing. This will help by stabilizing your body.

There are many other stances that work great, but if you are a beginner, it is recommended to start with the one foot forward approach. Once you have mastered once stance, it would be a good idea to experiment with other stances that peak your interest.

Have a Slight Lean

Having a slight lean also helps with stability. When start to lean forward, your body will naturally shift a majority of its weight to your front foot allowing you to become more balanced and stable before your throw.

Now that you have your stance in check, the next important aspect is actually throwing your dart.

How Do You Hold and Release a Dart?

It’s best to hold your dart with at least three fingers. Keep your thumb at the bottom of your dart, while your pointer and ring finger are up top. While holding your dart in front of your face, you should use your dart’s flight like a crosshair for your target.

Look down your darts flight at your target and release your dart right when it is level with the target you are aiming for. Be sure to put enough power behind your throw if you want a nice, straight throw.

Should You Spin a Dart When You Throw It?

Depending on the way you throw, your dart may or may not have a spin to it. Most dart player’s darts have a natural spin to them due to how their fingertips gently roll off the darts as they are releasing them.

Trying to force a dart to spin can be a bad idea. It gives more room for an improper throw. The more natural the throw, the less things that can go wrong during your throw.

Trying to add a spin to your dart can also decrease your accuracy as the extra emphasis on the spin may cause the dart to fly too far to the left or right depending on your spin.

Wobbly darts are a result of an improper throw and/or foot stance. This is very common among new players, but isn’t the end of the world. It takes a lot of practice to become a formidable dart’s opponent.

Try practicing with the same set of darts, stance, and throw before moving onto other variables. You will never know what you are good at if you are quick to change.

Keep your dart’s throw natural and don’t deliberately try to add a spin to it. Spinning a dart can cause increased drag and reduced speed as well as possibly missing your target altogether. Master the technique of throwing a dart properly, and everything else will fall into place.