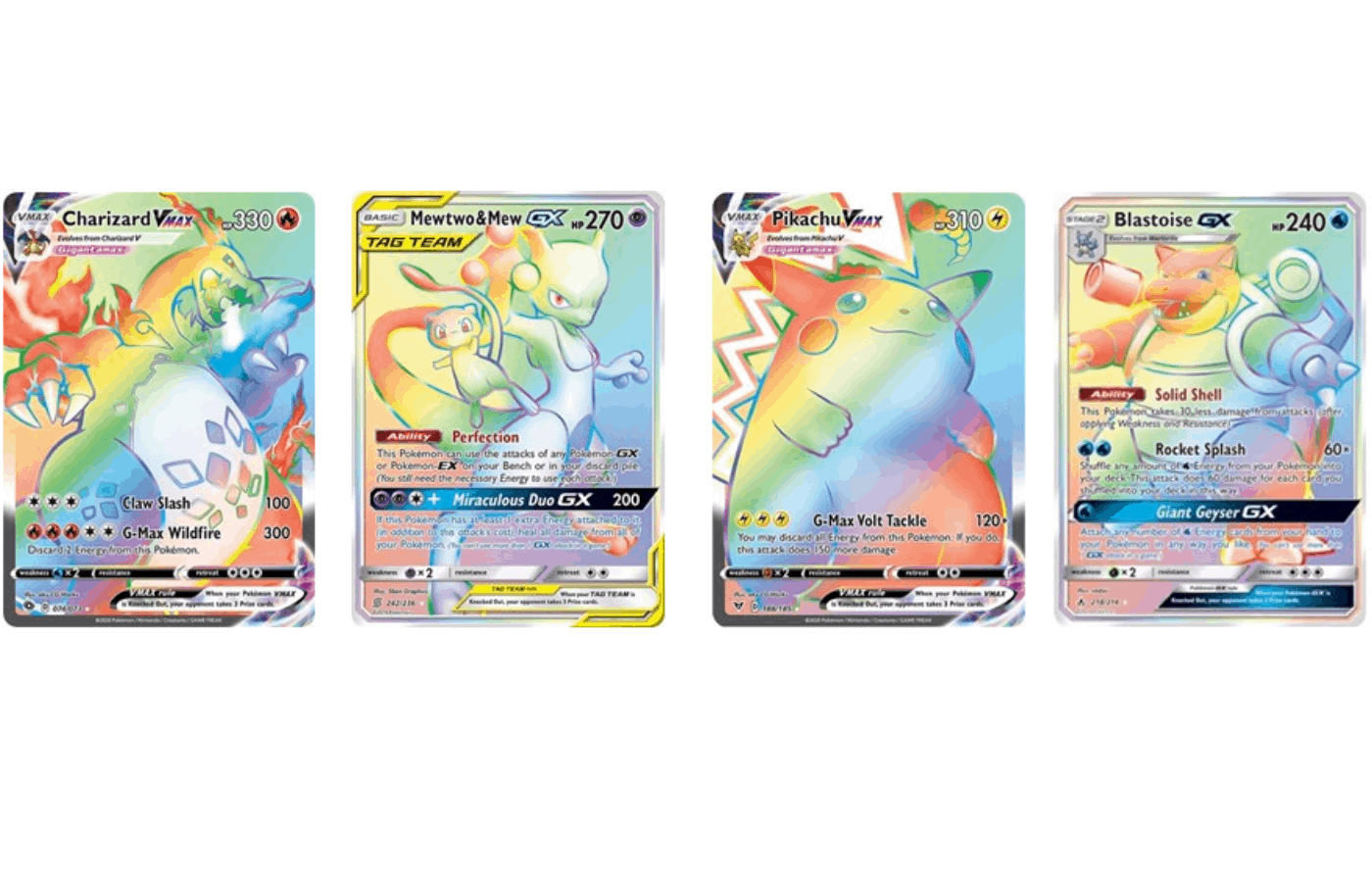 Have you seen a Pokemon card that has a rainbow color to it? Wondering what it is? Well, you have a rainbow Pokemon card! Let’s take a look at what they are about, shall we?

Most of the rare holo cards (in particularly GX and EX cards) from recent sets can appear in a rainbow rare format. This means that they are not going to play any differently from the card that they are based on. They are just a rare coloration of it. Pretty similar to picking up a shiny Pokemon if you were playing the Pokemon games!

What Pokemon Cards Can Be Rainbow?

Nearly all rare cards in a set can be rainbow rares. This includes full-art Pokemon cards, which are often seen as the rarest rainbow rares to pull. However, the trainer cards can also appear in rainbow rare format.

The value of these will be dependent on the trainer that you have pulled e.g. the Shauna rainbow rare card, particularly the full-art version, was incredibly rare and useful a few sets back, and thus it would have commanded a higher price than other trainer cards.

They are some of the rarest cards in the game, with most booster boxes having no more than 1 or 2 cards. However, you can often go through an entire booster box (36 packets of cards) without seeing a single rainbow rare!

What Are the Chances of Pulling a Rainbow Rare Pokemon Card?

This is going to be dependent on the set that the rainbow rare appears in. Some sets have been deliberately manipulated to make it easier to pull rainbow rares.

This is because these are ‘limited sets’ often found only in the big boxes of Pokemon cards (i.e. the promo boxes) and thus people won’t be buying them as often as your average Pokemon booster box.

Across the main expansion sets that have been released in recent years, it is believed that the pull rate for a rainbow rare is between 3.6% and 4.5%. This means that, on average, you should be able to pull one rainbow rare per booster box. However, as we said before, there may be some booster boxes that do not contain a single rainbow rare card!

If you are trying to pull a valuable rainbow rare Pokemon card, we suggest purchasing a recent expansion set. At the time of writing this article, the Vivid Voltage expansion set has recently been released and has many sought after cards by collectors. Click here to check the current price of the Vivid Voltage booster box.

Where Do You Get Rainbow Rare Pokemon Cards?

Every set since the Sun & Moon expansions have contained a few rainbow rares. So, if you are looking at a set that was released since February 2017 in the United States, then you have the potential to pull a rainbow rare from the set!

Of course, pulling rainbow rare pokemon cards from a set is incredibly difficult. This means that cracking open booster packs probably isn’t going to be the route that you want to be going down if you have a very specific card in mind that you want to pull.

Thankfully, there are plenty of places that you can purchase rainbow rare Pokemon cards as ‘singles’ i.e. you buy only the card that you want. Some of these singles are not going to be cheap (more on that in the next section), but it is going to be a lot cheaper than pulling cards from a booster pack.

However, some would argue that you do lose the thrill of the chase like this.

How Much Are Rainbow Rare Cards Worth?

This depends on the card that you have pulled.

If you have played the Pokemon trading card game, then you will know that some cards have more value than others. This is dependent on two factors:

Now, we all know that rainbow rare cards are rare. This will instantly make them more expensive than their standard rare counterparts. It is the playability that will determine the real value of a rainbow rare card.

If a card is currently featured in top decks, then it is going to have value to it. Once a Pokemon set has been rotated out of standard, then the value of that card is going to plummet. It will still have a bit of value as some people do collect the cards instead of playing them, but it will never be the same price as when it could be used in tournament-legal decks.

Cards that were never played in proper tournament decks never see the price change all that much. The value is still high, but it would be a fraction of the price of an actual tournament card.

Of course, there are some cards that will always have value, even when they are rotated out of the game. This is because they look good, and they often feature Pokemon that people want. Think about all of the sets that Charizard has appeared in.

We literally cannot think of a single set of Pokemon where Charizard was a card that people would play. It has always been a useless Pokemon in the game. However, Charizard’s cards are always worth an astonishing amount of money because the cards are rare, and people love the Pokemon.

At the moment, the most desirable rainbow rare card isn’t actually a Charizard. It is a Pikachu. The Pikachu VMAX card can be found in the Vivid Voltage expansion, and prices can reach as high as $300. Part of the reason why this card is so desirable is due to the artwork. This is the first time that Pokemon has featured a ‘chunky version’ of Pikachu on their cards since the base set.

The rarest Charizard rainbow rare is the Charizard VMAX card that was only found in the limited release Champion’s Path set. This card can hit upwards of $500.

This is a far cry from the Charizard rainbow rare that appeared in Cosmic Eclipse which is just a fraction of this price. Although to be fair, that was a team-up card also featuring Braixen which does bring the value down a little bit!

Every set going forward has a good variety of rainbow cards that you can pull, and some are even worth a good amount of money. While rainbow rare cards are not functionally different from other rare cards in a set, they are incredibly rare.

If you are lucky enough to pull one, then stick it in a quality sleeve as quickly as possible. That card could have some serious value to it!