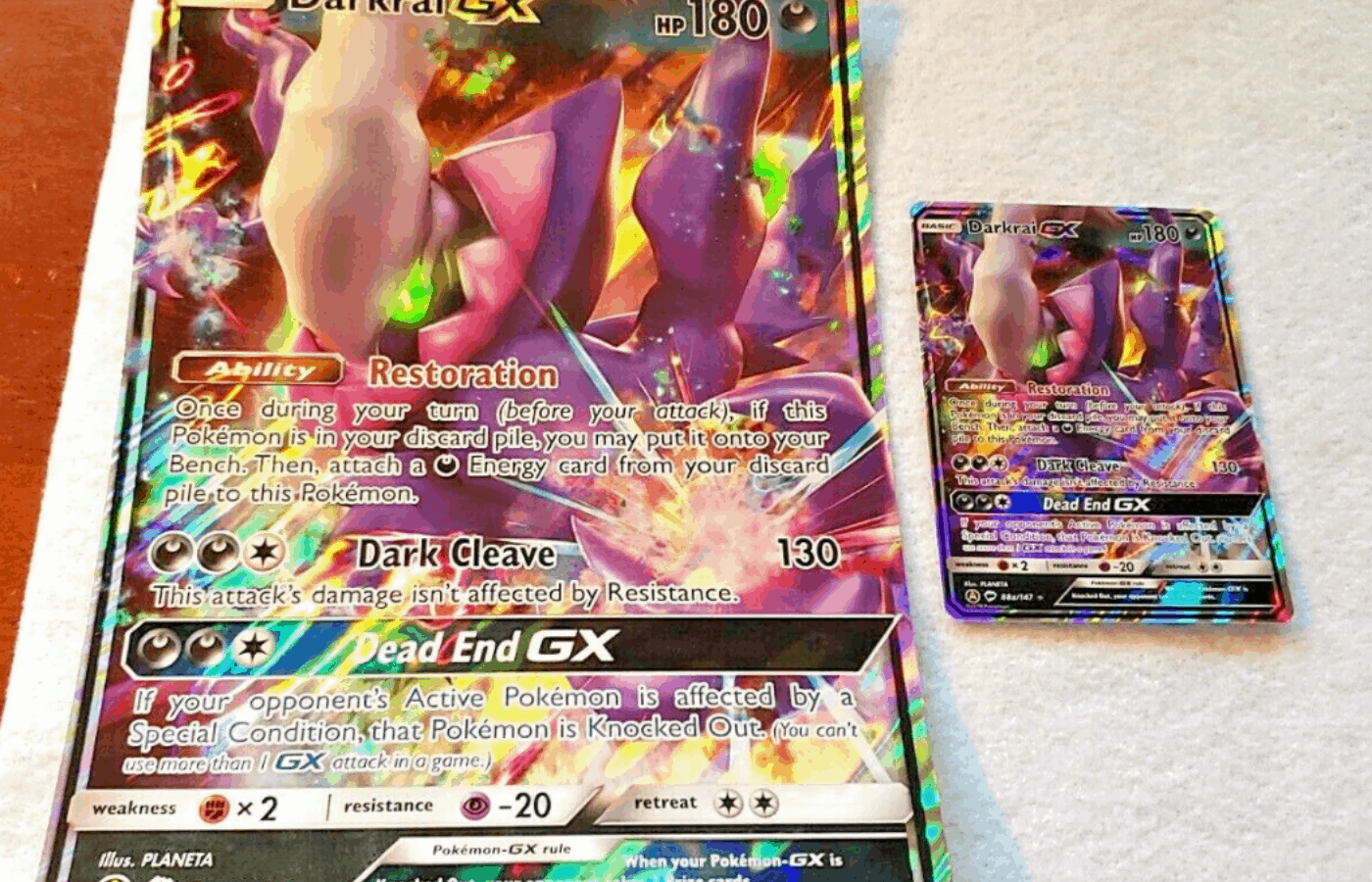 For the most part, Pokemon cards are the same size. This means that you are going to be able to insert them into the same card sleeves like all the other Pokemon cards. Every so often, you may encounter Pokemon cards that are slightly larger than others, though. Are these real Pokemon cards? Let’s take a look.

Let’s expand upon this so you know a little bit more about the size of Pokemon cards, as well as a bit of information on fake Pokemon cards. Hopefully, this is going to clear up some of the more burning questions that people have about how Pokemon cards work.

What Is the Standard Size of a Pokemon Card?

The standard Pokemon card size is exactly the same as other trading cards. Well, at least Magic: The Gathering cards.

Are All Pokemon Cards the Same Size?

All Pokemon Cards that have been designed to play the game with are going to be the same size. It doesn’t matter whether the card was produced during the Wizards of the Coast era or when the cards started to be printed by the Pokemon Company.

The reason why the cards have always been the same size because if they were different, you would easily be able to see which card was which in your deck.

Since this would go against the whole idea of the game, the cards have remained a standard size. Luckily, this is the most common size for trading cards, so being able to find sleeves and deck boxes for your cards should be dead simple.

If you received a Pokemon card that is larger than your normal Pokemon cards in your set, this isn’t a mistake. These are jumbo cards. They are fine. Just don’t try and take them to a Pokemon tournament, as you are not going to be allowed to enter with these cards!

It should be clearly marked somewhere on the card that they are jumbo cards, so this probably isn’t going to be a major problem anyway.

It would be pretty difficult to mess up the sizing of Pokemon cards, even if you are planning on faking them. If you carry out a Google search right now, you will actually find plenty of templates online that you can actually follow to make your own Pokemon cards.

These are all going to be the right size. If you can replicate Pokemon cards in the comfort of your own home, then you can bet your bottom dollar a business built around taking will be able to do it.

That being said, we have seen some smaller Pokemon cards out there for sale. If you have stumbled across these cards, then we can guarantee that they are fake Pokemon cards. As far as we know, Pokemon have never produced smaller cards than the standard size.

This automatically means that anything that is smaller  than the standard Pokemon card is going to be fake. It probably isn’t even going to be a noticeable size difference, though. It could be a fraction of an inch.

Pokemon produces jumbo cards. However, these are noticeably larger than your traditional Pokemon card. The only way to get your hands on them, short of going to a reseller, is to buy them in promo packs.

If you see entire packs filled with larger cards, then you can guarantee that they are going to be fake. If the cards are only a small amount larger than your typical Pokemon card, then you will also know that they are fake. Pokemon does not produce larger cards that could be mistaken for your average Pokemon card. Only scammers will be doing this.

To check the current price and availability of Pokemon Jumbo Cards, click here to view the selection on Amazon.

Are Some Pokemon Cards Thicker?

Actually, Pokemon cards are three pieces of card that have been pressed together. This is why one of the best ways to check whether a trading card is fake is to look at the side of the card. If there isn’t a clear visual of three separate pieces of card, then you likely have a fake.

The one exception to this rule will be some of the older holo cards. They are going to feel ever so slightly thicker due to the fact that they are holographic.

This is why a lot of people would have weighed the booster packs in the past. You would easily be able to tell whether a set had a holographic card in there. This is why the Pokemon Company includes a holo card in every pack nowadays. It means that each booster pack is going to be impossible to weight.

Pokemon trading cards that are designed to be played with are not going to be larger. They have always been the same size, ever since the game was released a couple of decades ago.

The Pokemon Card Company does produce slightly larger cards. These are known as jumbo cards. These cards have been designed specifically for you to be able to display them. It is evident that they are jumbo cards, so you would never confuse one of these cards with the typical Pokemon card.

If you have a card smaller than a normal Pokemon card, then this likely means that you are dealing with a counterfeit card.